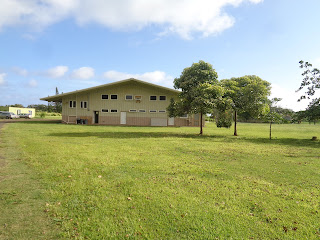 They are no longer in the tent. Often, tourists who have seen the movie Soul Surfer come to this church in Kauai expecting to see a tent on the beach like in the movies, but find they’re in a building. To tell the truth, in real life the tent was on a lawn rather than a beach anyway. So if your faith was in movies, you should also know now that the Ark of the Covenant has not been rediscovered, and dinosaurs have not  been cloned using mosquito fossils.


So what did we find in visiting Kauai Christian Fellowship? A loving body of believers that happen to meet in one of the more beautiful places in Creation. 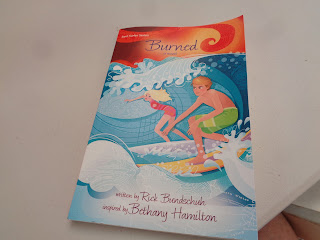 I admit to a bit of confusion when we were looking for this church before our trip began. My niece, Janae, was good friends with a pastor’s daughter in Kauai. I knew this was the church that Bethany Hamilton, of Soul Surfer book and movie fame, had attended. But there was some Google confusion when we tried to search the church. Turns out, Pastor Steve Thompson founded North Shore Christian Fellowship (aka Tent Church, aka Soul Surfer Church), which recently affiliated with a church on the South Shore of Kauai, Kauai Christian Fellowship, and now both campuses use that name. 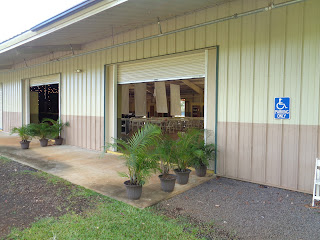 Sunday morning, we entered a gymnasium rather than a tent. The north shore campus of Kauai Christian Fellowship meets on the grounds of a Christian school, using the gym for worship and a classroom for Sunday School. Before the service, a ukulele choir played and sang a number of songs (including “How Great Thou Art” sung in Hawaiian and English). 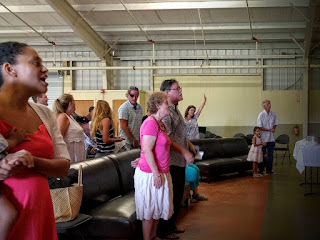 It is often our practice to sit in the back of the congregation, all the better for quiet observation. But I hadn’t worn my glasses, so I decided I needed to sit up front in order to read the screen. There was a bonus with this choice, because the front rows are composed of couches and comfy chairs. There are also round tables along the sides set with snacks. (Both are designed to discourage people from huddling in the back rows.) 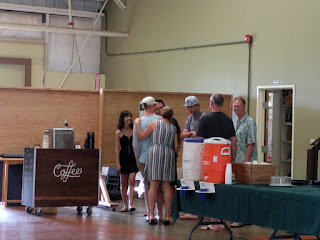 The service didn’t start on the button at 9:30, but mainlanders find they must adjust to “Island time” when they come to Kauai. After some singing, Pastor Steve introduced the time of communion. All believers in Jesus as Lord were invited to come to the table and take a piece of bread and a cup and return to their seats, he said, then all would eat and drink together. (A woman in our row was holding a small child, so I offered to bring back communion for her. She gladly accepted. Her name was Millie, and I’ll quote her later.) 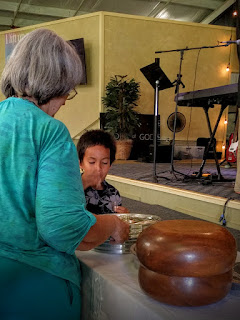 When it was time to collect cups, we passed ours to a five year old carrying the baskets. Kauai Christian Fellowship operates on the philosophy that the Church is a family, and everyone in the family has chores to do. Therefore, there is an effort to find age appropriate tasks for everyone, including children and teens. (After the worship service, at least one kid requested the task of drinking the leftover grape juice.) 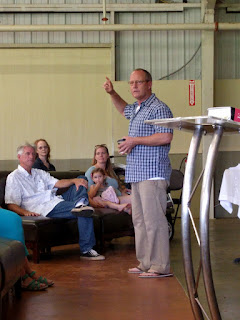 Adam Ayers, an anthropologist and a pastor from Southern California, was the guest speaker. (There are congregations where the senior pastor tenaciously holds the pulpit, and only reluctantly allows others to preach. Kauai Christian Fellowship has a different way of doing things. There are three teaching pastors, Kahu Steve Thompson of the North Campus, and Rick Bundschuh and Dain Spore of the South Campus rotate most of the speaking duties on both campuses, but other guests and staff members take shifts as well.) 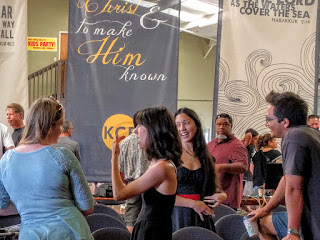 Ayers began his sermon with a current event on the minds of many on the island. He asked people to raise their hands if they knew what he was talking about when he said, “Mark Zuckerberg” and “fence.” He asked those who didn’t raise their hands to ask hand raisers for an explanation. You see, Zuckerberg recently purchased a 700 acre property and is surrounding that land with a six-foot high privacy fence. Ayers remarked that there seemed to be a dichotomy between someone making a fortune mining the privacy of others at Facebook and then seeking privacy for himself. Ayers said before we judge too quickly, we should recognize that we all live with some degree of hypocrisy, especially those of us in the Church. 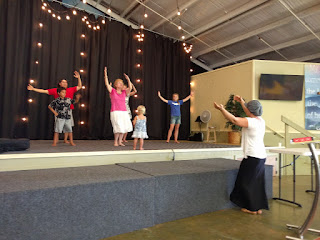 He quoted A. W. Tozer, who said, “Christians don’t tell lies -- they just go to church and sing them.” Christians speak of Bible words like “freedom” and “humility,” Dr. Ayers pointed out, but they seem understand them as poorly as Vizzini understood the word “inconceivable” in The Princess Bride. But there are signs of hope -- Dr. Ayers said he wanted to tell about the most moving communion moment he had ever seen. (He prefaced this by mentioning a wonderful communion moment from that morning when a junior high boy dashed to the table to make sure he didn’t miss out.) 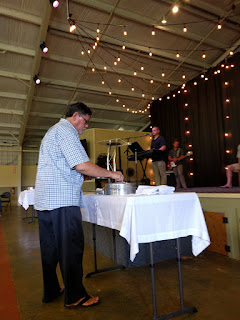 In the eighties, Ayers was in a small group that was also attended by a man named Bill. Bill was a schizophrenic who would, during group discussions,  ask whether he was sounding crazy or not. He had contracted AIDS. Back then, no one was sure what caused AIDS or how HIV was spread, and fear was rampant. The group was sharing communion, all drinking from a common cup. Bill was unsure whether he was welcome to drink from the cup with the others, but he did. And the person who took the cup from Bill made a point of drinking from the same portion of the rim of the cup. It showed some people do understand what the words “Body of Christ” mean. 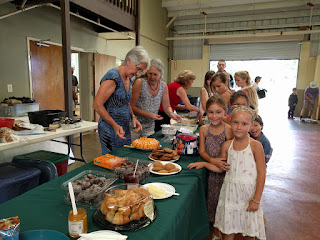 After the service at Kauai Christian Fellowship North, what was called “snacks” but was really a small meal was served. People apologized for the smaller than usual selection (it l with a couple of explanations. One was that the next day was the Fourth of July Picnic at the beach when a large meal would be served. (Which was true. There were bounteous servings of hamburgers, hot dogs, veggie burgers, chips and salads.) Another explanation was that in the summer when surf was up, some wouldn’t stay for eating and cleaning up but were quick to dash for the beach. 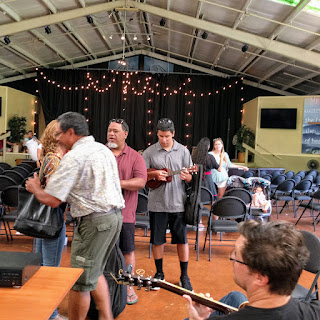 While waiting in line to eat and also during the meal, I had the opportunity to ask a number of people why they came to Kauai Christian Fellowship, North Campus. Millie (our communion neighbor) said she was an unusual case. She came because her husband was on staff as a worship leader. But she still told me something she appreciated about the church. She said previously, they had been at a megachurch of thousands in Las Vegas. There, things were done on a “transactional basis.” But here, she said, she was immediately treated as family. People offered to babysit and wouldn’t consider being paid. People brought food when their family moved in without looking for anything in return. 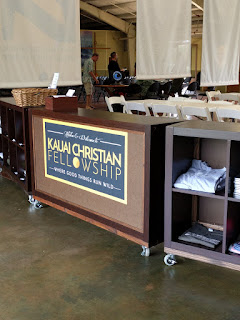 That theme of family returned with many people I spoke with. Heidi (a church greeter) said that when she first came to the area, she found other churches with solid teaching, which she also found at KCF. But when she came to the after church meals, she found “instant family”.


I talked to a woman named Sailor who said she had been at a church before that didn’t have older people. She appreciated coming to this church, where she found older people and younger people, because that was more family like. She also loved Kahu (Pastor) Steve’s teaching, which she said was focused on “the love of God.”  I talked to many people who spoke of Steve’s gentle spirit and  focus on God’s grace. (Someone mentioned that a few years before, a small group had tried to force legalism into the church but “they crashed on the rock of Steve’s solid grace.”) 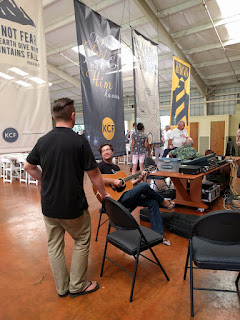 Mason, the worship pastor on the North Campus (and Millie’s husband), said that family focus was part of the church culture, but was also part of the island culture. Everyone considers themselves the “uncle” or “auntie” of all the children. After church we saw children on skateboards on the concrete floor of the worship area, with all adults keeping a watchful eye on them. At the beach, everyone’s children were entrusted to the other loving adults when parents were busy with other tasks. 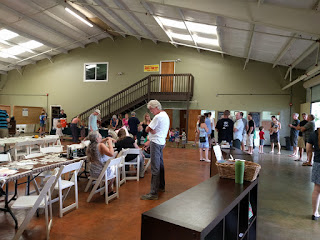 Formality is not a high priority. I talked to Rick Bundschuh, teaching pastor at the South Campus, about their membership process. They invite people who’ve started attending to a big party where they are told about the church, its goals and methods. If people want to become a part of things, they are given a key to the property. Hundreds of people have keys to the buildings. “If we err, we’d prefer to err on the side of trust,” Rick said. 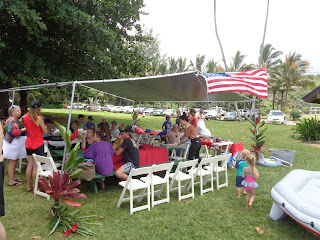 Oh, and if you were wondering if Bethany Hamilton was at the service, she wasn’t. She still comes on occasion, but she’s married, has a child, and has a number of other commitments, many of them off-island. For a time she had to deal with tourists who would come to church just to see her, so she started arriving late and leaving early to avoid distracting others. But a number of people we talked to (inside and outside of the church) talked about what a gracious person she was. Kahu Steve spoke of her ministry to women who have lost a limb (it’s called “Beautifully Flawed”) and the joy she has working with the Make a Wish Foundation when they bring groups to Hawaii. It seems she is a wonderful representation to the public of the kind of ministry her church has been doing for a long time.

Statistics
Service Length: 1 hour 5 minutesSermon Length: 27 minutes
Visitor Treatment: During an announcement time before the sermon, Pastor Rick told the congregation to look around and "meet somebody you don't know." Everyone was invited to an Independence Day picnic at the beach the next day. There wasn't (as far as I could tell) any way of recording who was in attendance or any visitors.
Followup by Tuesday Morning: none
Our Rough Count: 115 Probably Ushers' Count: 125Snacks: coffee, water, and (for sale) specialty coffee drinks. A variety of sweets and treats as well as a meat stew covered the snack table. Musicians: keyboard, bass, percussion box, and electric guitar (all men) 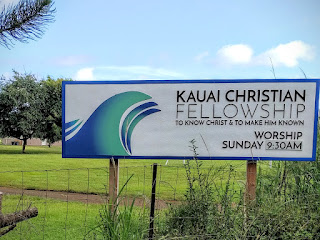 Posted by churchandstates at 3:29 PM
Email ThisBlogThis!Share to TwitterShare to FacebookShare to Pinterest
Labels: 2016, on the road