Mindy and I have grown used to puzzled looks when we announce our travel plans.

Us: “We’re going to the Fun Spot in New Hampshire, the largest arcade in the world!”
Puzzled-face friend: “You’re taking the kids?”
Us: “No.”

Us: “We’re going to visit churches throughout California used in movies!”
A face with some genuine interest: “Oh really, what films?”
Us: “The churches in High Noon, The Graduate, and Sister Act!”
Continued interest: “Oh, really!”
Us: “As well as Robin Williams’ License to Wed and I'm in Love with a Church Girl!”
The confusion returns.

Admittedly, when we told people we planned to go to a church and a bar in every state there was some genuine excitement. We even got a shouted “F*%@ yeah!” from a restaurant hostess in San Francisco. We also had a friend tell us, “I have no idea what you’re doing or why you’re doing it.” 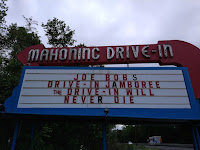 But the usual confusion turned to utter bewilderment when we told people we would be going to Joe Bob Briggs’ Drive-In Jamboree in Lehighton, Pennsylvania.
It was difficult to know where to start to explain the event. Start with Joe Bob himself? A fictional persona of writer John Bloom, Joe Bob is the self-proclaimed nation’s foremost drive-in movie critic. I’ve been reading Joe Bob since the early 1980s as he exalted the work of Chuck Norris and Jean-Claude Van Damme. I watched his show on The Movie Channel back in the day, when it featured exploitation films. Now he hosts a show on Shudder, a horror streaming service.
That's another place where I could begin the explanation: the Jamboree was a gathering of people who love horror films -- everything from the eerie Universal Monster films of the 1930s to the blood and guts of 1980s slasher films to current twisted psychological thrillers. I’ve liked horror films since I was a kid, but if you ask Mindy how she feels about horror films she'll tell you, “They scare me and I don’t like being scared. I have nightmares.” But she says she was all for this trip because “It sounded like dumb fun.”

Perhaps the best place to start in explaining why we wanted to do this trip is to say that when we wrote about bars and churches we were really writing about community, and this trip was certainly about community. Most of those who ventured to camp out at the Mahoning Drive-In for the Jamboree consider themselves part of the Mutant Family, a diverse collection of horror fans who have found each other online and wanted to meet in person. 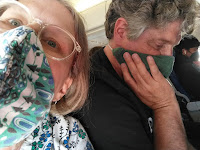 Sometimes, though, we chose to avoid explaining the trip at all; we said we were flying to Indiana to visit Mindy's family (and not mentioning the side trip to Pennsylvania). It was sort of true. We were looking forward to spending time with her dad and her sister and brother-in-law and some Indiana friends. As it turned out, that part of the trip was abbreviated -- and quite different than we'd planned.

Mindy had made our flight plans to Indiana and arranged for a rental car which we planned to use to drive to Pennsylvania. (This is how we usually plan trips, and I greatly appreciate her taking care of it. This time, though...) Our flight left on the afternoon of July 13th, with a planned arrival in Indianapolis shortly after midnight. And she made arrangements to pick up a rental car on July 13th, at 12:30 AM.
Some of you seasoned travelers see the problem here.

We donned our masks for the trip (reminding ourselves that it's possible to stretch a bag of pretzels and a cup of Coke for a very long time when the mask got irksome), and eventually found ourselves in Naptown (sorry, Indy) at the rental car desk. Where they told us they didn't have a reservation for us -- Mindy had made the reservation for the 13th and it was now the 14th. We asked if they had anything else available, they said no, maybe tomorrow, so we Ubered our way to Motel 6 (where the reservation was for the correct night).

In the morning we began checking rental car agencies. None were available in a thirty-mile area from the airport. Mindy talked to a national rental agent who said that in other years, an agent would get around 150 calls on a busy day in the height of the summer vacation season. He told her that since March 2021, rental agents with his agency were averaging 200 - 300 calls a day. 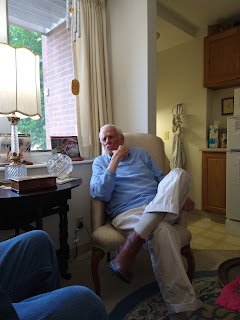 We'd planned to drive to Pittsburgh that night after spending the day with Mindy's dad and meeting her sister and brother-in-law for dinner, but no car meant our plans would have to change. We found we could rent a car at the airport in Pittsburgh, so we booked a flight to arrive there that evening.  We were able to book a rental car in Pittsburgh, so we booked a flight there that afternoon. The only one of our plans we were able to accomplish was lunch with her dad (which was delightful), then a quick Uber to the airport. 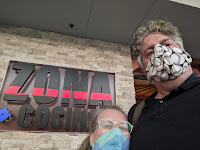 We donned our masks again, and Southwest Airlines took us to Baltimore (because where else would you stop between Indianapolis and Pittsburgh? We recommend Zona Cocina for TexMex at the Baltimore/Washington International Airport), then another late-night arrival -- this time in Pittsburgh. And this time we could drive our rental car to a hotel.

In the morning we were able to pay homage to the great horror director George Romero by visiting the cemetery from Night of the Living Dead and the mall from Dawn of the Dead on the way to the drive-in. (Don't worry, I see that puzzled look on your face).
Posted by churchandstates at 11:02 PM
Email ThisBlogThis!Share to TwitterShare to FacebookShare to Pinterest
Labels: adventure, movies, Pennsylvania, travel