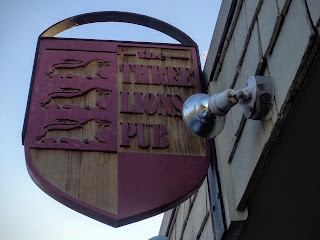 Back in 2016 when we were visiting a bar and a church in every state, we found ourselves at a bar in Washington state with our three children. Both daughters, without realizing it, chose the same pseudonym.

The Three Lions Pub, Redmond, Washington
Every family cherishes, I’m sure, their first trip to a bar together. Okay, maybe not. I’m not sure, since it wasn’t a thing in my family. But I’m sure this was our first bar visit as a family, because our youngest is now 21. Just not sure about the family cherishing thing. 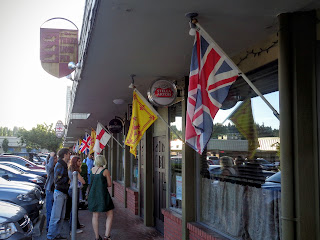 Here’s how it happened: Dean and I decided we would rather see Alaska in the summer than in the winter, so we took a break from driving on the East Coast and flew from New York to Seattle to Alaska, back to Seattle overnight, and on to Hawaii. That trek complete, we decided to spend a few days in Redmond, Washington (where our daughter and son-in-law live), with the whole family, including the daughter from Brooklyn and the son from Santa Rosa. 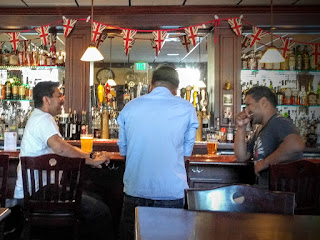 The paragraph above is, frankly, a bit of an excuse. The main reason we walk into bars is to get into conversations with people we meet there, but this week we really just wanted to talk with our family. We hope to make it back to Washington state towards the end of the year, when we expect to talk to locals we don’t already know. But not this week. 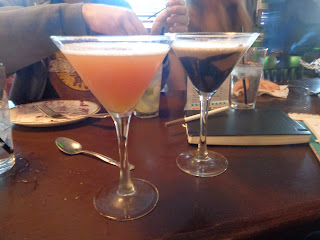 Instead, the six of us went to The Three Lions Pub in Redmond. The place has an English theme, so yes, football was on the telly (American translation - “soccer on TV”). Guys were playing darts. (They invited Dean to play. There are weekly games, and one of the guys said, “You meet cool guys here. And some not so cool guys.” One guy raised his hand and said, “I’m one of the not cool guys.”) The drink menu is full of British references from Mary Queen of Scots to Princess Di. (As a result, our drink orders included the Churchill Margarita, Fawlty Towers, London Metro, Princess Diana, Strongbow cider, and Absolutely Fabulous.) 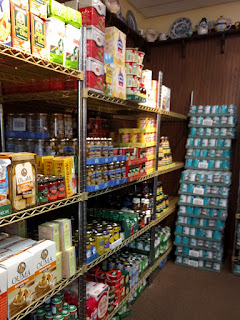 There was also shockingly good food. That was rather disappointing, since tasty food doesn’t seem to go with the British theme, but what can you do? Bret ordered soft pretzels with a good beer cheese dipping sauce, "Eduardo” ordered blueberry cheesecake, and Dean ordered bread pudding, but he didn’t order it in a Cockney accent, so that was a missed opportunity. 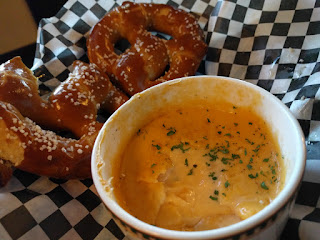 Though circumstances were quite different from our average bar visit, nothing could stop us from asking our standard questions. We even said, “What’s your first name, and feel free to lie about it," as we always do (usually, people give us their actual names, as far as we know. This time, the lies were cheerful and blatant.) Next we asked the other two standard questions, “What makes for a good bar?” and “Whether you go or not, what makes for a good church?” 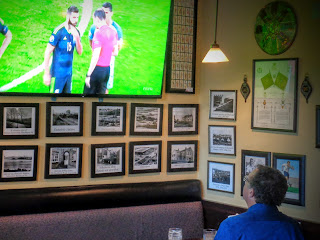 To the second question, daughter “Toni” responded that she liked quiet places that had good music and cheap drinks -- “preferably cheap, cheap, cheap” and “ample seating because I don’t like standing. I get upset when it’s crowded.” She added that a bar should ideally have a patio. She usually gets what she wants, she said, “and if I don’t, I go to a different place.” 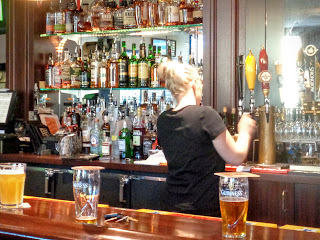 Eduardo said he likes “a bartender who knows what he or she is doing, good beers on tap, and a place to sit.” He also likes a quieter place, or at least “not so loud you can’t hear the person next to you.” Both agreed they wanted to be at a bar to spend time with their friends.


Toni added, “Usually the point is to hang out with friends.”


Bret said he’s looking for “decent selection of drinks, and bartenders who know what they’re doing.” 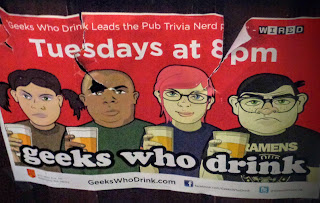 About then Dean and our other daughter, “Tonimorrison” came back from an errand. She said she looked for good food, “not too expensive but well-made drinks,” and she wanted to be able to talk to people -- “presumably the people you came with.”


We turned to the church question.


Eduardo said that the speaker should have intelligent things to say about their topic and “not rambling. I think we can all agree about that.” (I think he’s right.) 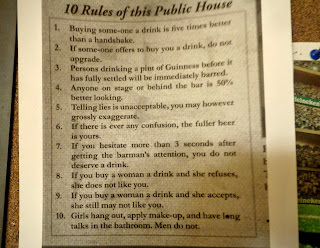 Bret said that a good church will have a firm grasp of scripture and a “relatively quick sermon that still has insight. It’s probably a good thing if the church is welcoming; you don’t want to feel like an outsider, but you don’t want to be overly welcomed.”


Tonimorrison said she thought that church is a “place for people who want to know Christ better,” and she looks for “a pastor who sincerely loves God and people,” where she can learn something and give back. When Dean asked if the learning was for old and new church goers alike, she said, “Hopefully, you’re learning from those around you. You should be growing in Christ.” 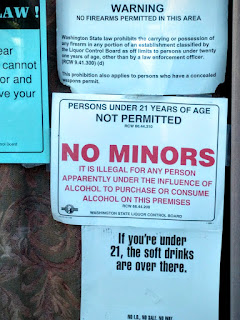 Toni said, “There should be music, but not too much. It should be easy to sing, with projected lyrics.” (There was a sound of agreement around the table at this point.) She added that the church should be “genuine, not trying to hard to be relevant” and “genuinely focused on God, not on what they think.” She said she also wants “a sermon that’s -- it’s a lot to ask -- inspired. Not offensive, not sexist, not exclusive.” A church should be service oriented, she thinks, and considerate of the various experiences of the people. 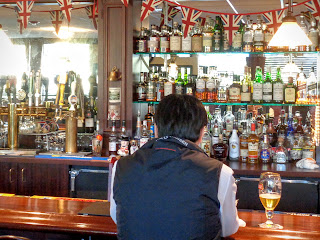 So next week we’re back to the East coast, our Dodge Caravan, and complete strangers in bars. But we wish you all from The Three Lions Pub a jolly “Pip, pip” and “Cheerio” and maybe even a “Bob’s your uncle.”

Posted by churchandstates at 9:15 AM
Email ThisBlogThis!Share to TwitterShare to FacebookShare to Pinterest
Labels: 2016, bars, Toni Morrison, Washington