We All Need Saving
Part 1 of our adventure is an attempt to explain traveling from Seattle to Pennsylvania to watch a few movies (and see Mindy's dad). You might want to read it first.

By the time we got to the drive-in, we knew it would be closing. Not that night. We had no reason to think the Joe Bob Jamboree was canceled, but from what we could learn, the Mahoning Drive-in would be gone before long.

We learned about this drive-in long before we made plans to go to the Jamboree. A year or so earlier, we'd stumbled on the 2017 documentary At the Drive-In, which told the story of the Mahoning, and we were fascinated.
When most theaters (outdoor and indoor) had made the transition to digital projection, the Mahoning was unable to raise the money for the new equipment, so a group of film fans decided to try to keep the place alive anyway. by showing 35 mm films (meaning only old films would be used, no new releases) with volunteer labor.

Before we left Pittsburgh on Thursday morning, we started seeing #SaveTheMahoning on social media, We did a little research and learned that the property's owner (not the partners who own and manage the drive-in) had arranged to sell the property to a solar energy company for use as a solar farm. This would mean the end of the Mahoning Drive-In.

When we got to the drive-in on Thursday afternoon, cars were lined up along the road outside the entrance waiting to get in. No tickets were sold at the gate, so we all needed to show our phones or a ticket printout along with I.D.s in order to get in. Before long, we were given wristbands and followed the instructions of an organized series of volunteers to move through the maze of cars. The Mahoning is on a large field with graveled parking/driving lanes in the midst of a lot of grassy areas. There aren't any stanchions with speakers (people need to tune in to the FM signal), but The Mahoning still has the graduated bumps typical in drive-ins. We were directed to the back of the field to park with the other campers. All of us would be in tents along the back of the field.

We parked our rental car (a Nissan Rogue) in line with the others, with a volunteer making sure cars were parked tightly together. Several cars had signs reading, “Save the Mahoning!” We set up our tent behind the cars in the flattest grassy spot we could find (avoiding a few swampy spots), then wandered the property, admiring items available in the Mighty Mahoning Merch Tent, checking out a couple of photo op setups, and looking around the snack bar. 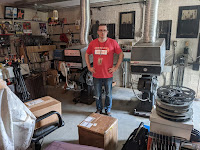 While in the snack bar, we could peek inside the projection room. We asked the young guy in the room whether we could come in and look around. He introduced himself as Robert and invited us in. I worked in a number of theaters back in the day and so the projector and the cans holding the films were happily familiar. The walls were decorated with movie memorabilia. Back in the day, in theaters where I worked, a truck would drop off films on Thursday for Friday start dates. But since the playbill in constant flux at the Mahoning, films are always coming in and out. Robert said sometimes films are sent to his home when there won't be anyone to pick them up at the theater.
Eventually we noticed a line forming near the snack bar. As in the days of the Soviet Union, at events like this people learn to join lines, then ask what it’s for. This turned out to be an autograph line for Joe Bob Briggs, so we stayed in our spot.

And we chatted with the people in front of us about horror movies, cons, and Joe Bob. Looking ahead in the line (we were a long way back), it seemed like almost everyone was in conversation. People talked about favorite filmgoing experiences, scary books, and saving the drive-in. We met George, who made the publicity poster for the Mahoning for the weekend. He wanted Joe Bob to sign his copy and give Joe Bob a copy to keep. His friends were vendors who would be selling their merchandise at the next day's event. 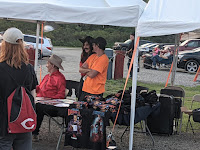 None of us were complaining about the line being (incredibly) slow. It was obvious that Joe Bob was taking time with every person who came his way, listening to their stories, answering their questions, and telling his own stories. Joe Bob didn’t even have any “people” to rush fans along. Mindy left the line for awhile to set up our blanket in front of the screen for the night's program, then came back. As we got closer, there was great excitement in the crowd as Joe Bob was joined by Darcy the Mail Girl (who had been posting her travel woes on social media over the past day or so).

Joe Bob has always had a mail girl. Back when he hosted Monstervision on TNT, an attractive, scantily clad woman brought him letters and postcards that had arrived via the U.S. Postal service, and Joe Bob read and responded to them on air. But times change.
On Joe Bob’s current Shudder show, Darcy brings emails and other correspondence while also posting on Twitter and other social media. Darcy also argues with Joe Bob about movies and frequently bests him in the movie trivia department. She has a community of friends and followers through social media and is, like Joe Bob, beloved by those in attendance at the Jamboree (and yes, she is usually scantily clad). 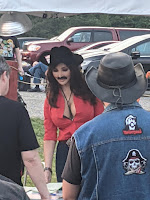 Darcy is also a fan of cosplay, and in honor of that night's screening of what Joe Bob calls “the greatest film ever made” (Smokey and the Bandit), Darcy was dressed as Burt in the film, complete with a mustache.

As the dinner hour approached, a member of Joe Bob’s crew came out to say that Joe Bob and Darcy would be taking a break, but that people wouldn’t lose their place in line. We were given numbers to hold our spots, and we were number 4. So we headed off to get our plates of food.
We got our plates of barbecue from the food truck, and headed to our blanket in front of the huge Mahoning drive-in screen. At dusk we were delighted to watch the fireflies, quite the treat for west-coasters like ourselves. The ground was a bit damp and mushy but we didn’t think that was any big deal. In the distance, there was a little lightning and thunder, but it looked like we would be okay. (For you literary theory fans, this is a little something we call foreshadowing.) 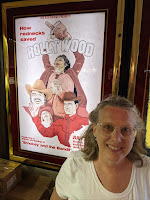 This night was a kind of pre-event for The Jamboree -- a lecture entitled, “How Rednecks Saved Hollywood.” Joe Bob has given this lecture for years throughout the country, often at movie theaters, but this was the first time he had given the lecture at a drive-in. He had been uncertain about whether he could use his laser pointer on the big Mahoning screen, and he was especially concerned he wouldn’t be able to see the audience and their reaction. Happily, we were in the front row and he could certainly see us.

One of the first questions that Joe Bob asked as he began the presentation was “Are there any Presbyterians in the audience?”
Mindy and I raised our hands. (Mindy is an official Presbyterian church member while I’m just a Presbyterian attendee, but I held up my hand nonetheless.) Joe Bob assured us that we would be offended that night.

Before telling about Hollywood, Joe Bob gave a history of one group of Presbyterians who went from Scotland to Ireland to America, where to become what we know as Rednecks. He went on to tell about how Rednecks were portrayed in films from the silent screen through the days of exploitations, Al Capp's Li'l Abner to Ma & Pa Kettle to child brides to moonshine to the kid picking the banjo in Deliverance. The final point of the lecture was the fact that God Love Rednecks  -- as illustrated by a clip from one of my favorite films, Tender Mercies. 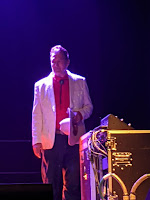 After a mesmerizing nearly three hour presentation, we watched Smokey and the Bandit in a 35 mm print on the big screen. I’ll admit it's never been one of my favorite movies, but these were perhaps the best conditions in the world to watch the film and it was fun.

It was 2:30 am when the film ended, and Joe Bob and Darcy went straight to the autograph table. We took our place in line and didn’t have to wait long. We introduced ourselves as the Presbyterians from the front row, and Joe Bob is either very good at seeming interested in what fans have to say or is, in fact, interested. It's impressive either way. We appreciated, too, having the chance to thank Darcy for the work she does fostering a sense of community among fans.

But there were other people waiting, and we didn't want to take more than our share of time. Even if that night had been the whole reason for our trip, we felt it would have been worthwhile, but we were tired and headed for our tent and the sleeping bags we'd purchased at the Monroeville mall that morning. We learned later that Joe Bob and Darcy continued chatting for a couple of hours more, almost until sunrise. 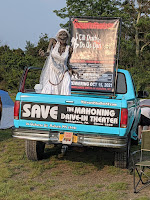 The next morning, we learned that the Rednecks weren’t the only ones who saved something. The Mutants had saved the Mahoning Theater.
It seems that the solar energy company wanted to buy the land because they'd assumed that the drive-in was dead. The response they received from thousands of fans showed this was not the case. The solar company pulled out of the deal, and the Mahoning partners were given the option of buying the land from their long-time landlord.

So the first day already had a happy ending. The plot complications came on the second day of the Jamboree. 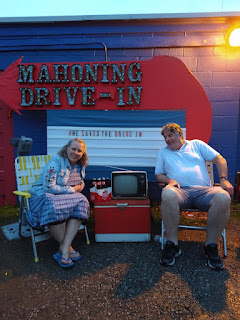 Posted by churchandstates at 8:45 PM
Email ThisBlogThis!Share to TwitterShare to FacebookShare to Pinterest