Even before we began 2016's epic road trip, we'd heard of the Alamo Draft House chain of theaters and wanted to visit one -- and San Antonio seemed like the right place to go. We didn't actually order drinks while we were there (spoilers!) but the experience was still noteworthy. A couple of years later, in Fresno, we did manage to buy a drink at a movie theater bar, but it just wasn't the same. We thought you might like to revisit these two bars today (and tonight, we'll be going to another theater here in Seattle to watch Captain Marvel -- we'll probably eat some chocolate popcorn, but I doubt we'll be drinking)
Alamo Drafthouse, San Antonio, Texas
When we lived in Healdsburg there was a big to-do when the local movie theater, The Raven, began to sell alcohol, even though it was in wine country so selling wine made sense. 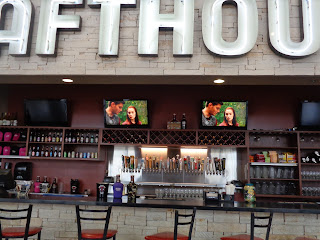 This week we visited one of the Alamo Drafthouse theaters in San Antonio, Texas. They offer dozens of local and imported draft and canned beers, mixed cocktails, and wine.

In the past, they've offered signature wines with movie themes such as "The Battle of the Wits" line to honor The Princess Bride in 2012 and The Silence of the Lambs Chianti and Pinot Grigio in 2013. 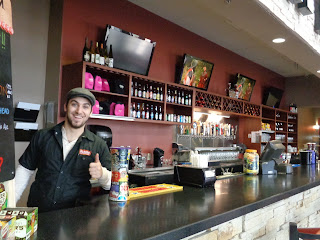 You can order from the bar and drink in the lobby or order from your theater seat. Quite the moviegoing experience.

(We wrote more about the theater in our movie blog.) 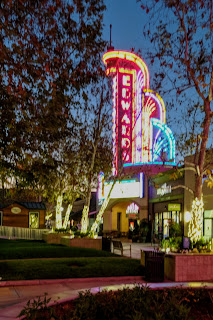 Edwards Fresno Stadium 22 and IMAX
“It’s not the worst thing spilled on our bar,” one of the servers said about the drink that didn’t stay in the cup. “I’ve had a lot of popcorn there, and we don’t even sell it [at the bar].”

I wasn’t sure if she was slamming popcorn, but I’ll admit damp popcorn is not a pleasant thing, and it’s certainly messy to clean up. You expect to find popcorn at a movie theater, of course, but why can’t there be cocktails, too? We went to the bar in a Regal Cinema (Fresno’s a Regal Cinemas town, so we can’t maintain our former prejudices against the chain).

We’re all aware we live in a deeply divided nation. Everyone seems to need to choose one side or the other, and people often treat those on the opposing side with spite and derision. I try to stay away from polarizing topics in this blog, but I guess I need to be open about where I’m coming from. 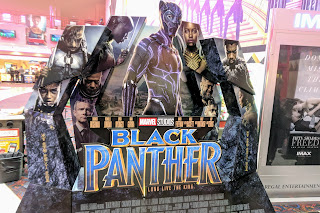 In the contest between DC and Marvel, my family has been on the side of Spidey and Wolverine. I’m proud to say, “Make mine Marvel!” We take every opportunity to see a Stan Lee cameo, so we went to see Black Panther on the eve of the official opening. Our son Bret, who came with us, graciously agreed to guard our theater seats (they’re not assigned at the Edwards 22) while we went to the bar. 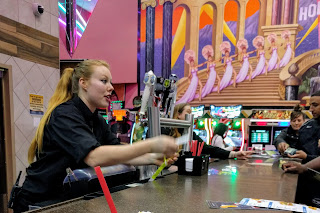 Sarah, our bartender, asked to see our IDs (always flattering) and strapped on our wristbands. “We’re new, so we need to stick by the rules,” she said. Law enforcement and ABC regulators apparently keep a watchful eye. 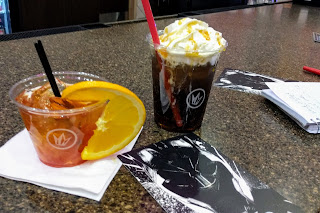 The lighted menu above the bar was helpful for an overview of the drinks available, but it changed pretty fast, so we asked for one we could hold. I ordered Vanilla Whiskey and Coke; I knew I’d made the right choice when the bartender asked, “Do you want the whipped cream and caramel on top?”

Mindy ordered a Sweet and Smoky Old Fashioned. The bartender said she liked it, and also mentioned that it was one of the few drinks that couldn't be made by the Smartender, an automated cocktail dispenser. Instead, the bartenders put the drink together from scratch. "Handcrafted with love," Mindy said. 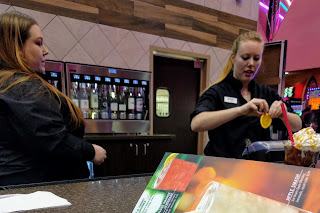 Sarah, one of the three bartenders working during the pre-movie rush, said people were “so happy to have a bar here.” (I can imagine the relief of parents dragged to, say, The Emoji Movie, to know they could order a drink. Or two. Or three. No more. Those are the rules.) 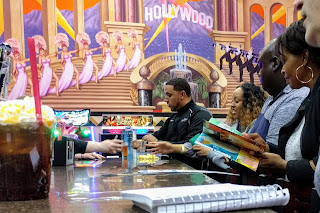 Two other couples came to the bar to order before their movie. The guys were ordering, I believe, rum and cokes. Both men said, “I prefer less coke.” One of the women asked about our cocktails. After we told her, I asked what movie she was seeing. I wasn’t surprised to find that her group was going to see Black Panther as well. (The film will probably take in over $200 million over the three day opening weekend, so the six of us at the bar were definitely not alone. Turns out their kids were saving their theater seats, too, so there’s something else we had in common). 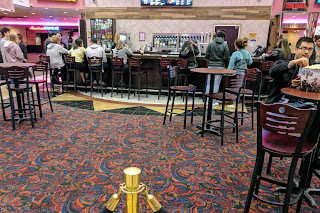 When we asked if she would be willing to answer our bar questions (“What makes for a good bar?” and “What makes for a good church?”), Brandy (quite the appropriate bar name) agreed. She said it was “definitely the bartenders” that made a good bar, and we all agreed that the women tending bar at the Edwards 22 were doing a fine job. “And the options,” Brandy added. 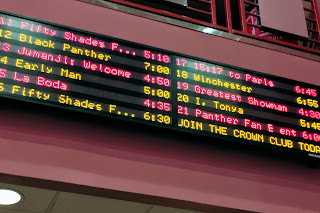 She said a good church relied on “the leading pastor. And a diverse community. A nonjudging church.” She answered our questions thoughtfully, but also quite quickly and succinctly, because she -- like us -- had a movie to get to.

We also had an opportunity to ask Tori, one of the bartenders, our questions. She said a good bar relied on the atmosphere, as well as good drinks. I asked what made a movie theater bar different. 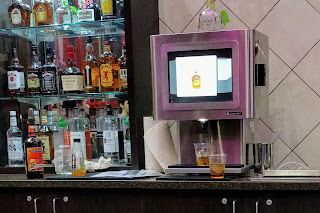 She said a regular bar was more laid back. If it took ten or fifteen minutes to get a drink, that was fine. In this bar, drinks had to be served very quickly because people needed to get to their show. As for a church, she said, “Atmosphere, that’s my thing. Friendly and open, not judgmental.”

During the movie, T’Challa drank a beverage that gave him superpowers. Another drink took those powers away. Neither of those drinks was on the menu of the bar at the Regal, but the cocktails we ordered were tasty and served with alacrity -- which was super enough. 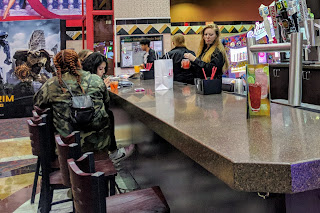 Posted by churchandstates at 9:03 AM
Email ThisBlogThis!Share to TwitterShare to FacebookShare to Pinterest
Labels: 2016, 2018, California, Fresno, movie theater, superheroes, Texas