2016 Revisited: A bar in Texas that's not what it seems

When our Texas friends told us The Barber Shop should be our bar for the week, we were confused. Turns out, a lot of other people were too, but it didn't seem to stop anybody from going to this local hangout. This was a night of bar firsts: the first time we saw a dog in a bar, the first time we saw a kid in a bar, first time we hung out with the smokers, and best of all, first time we went to a bar with friends during our 2016 trip through the country. This bar even made it into Cheers and Amen, the book about our adventure.

We thought you'd like to read about it. This was originally posted January 23, 2016 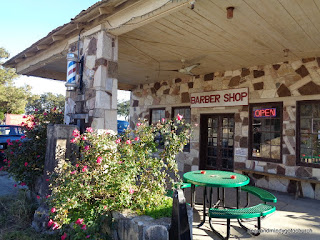 The Barber Shop, Dripping Springs, Texas
Before the trip began, when we told friends we'd be going to a church and a bar in every state, someone told us, "In Texas you'll see the same people in church Sunday morning as you saw in the bar Saturday night." Turns out that was quite the accurate prediction, since Dan and Julie Poirier, the folks we're staying with, recommended both this week's bar and this week's church and are joining us for both. 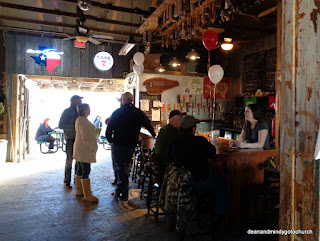 The Barber Shop got its name because that's what it was for 25 years. Before that it was a garage and gas station, but now it is a brewpub -- and quite a popular one at that. When we arrived on Thursday evening the spaces nearby were filled up ("Some of the hardest parking ever," said a local. I have seen harder, but San Francisco and Chicago are very different places.) 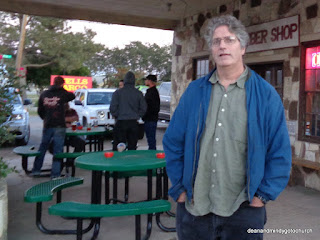 Mindy and I heard a great many opinions being expressed by a group of guys outside the bar, having a good time amongst themselves. When one of them walked out toward the street and a car whizzed by, they loudly let their displeasure be heard.

"They should patrol more here on Mercer. They don't need to in other places." 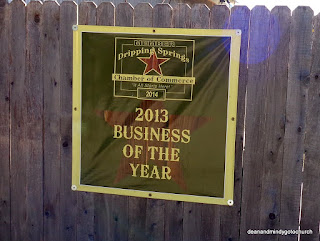 The Barber Shop is a popular local hangout. The Dripping Springs Chamber of Commerce named it best business a couple of years ago; it has wonderful kitschy decorations, from the barber pole in the front to the glowing Budweiser Texas light in the back, with deer heads in between. I enjoyed watching people's struggles with the front door, which has a knob that demanded just the right amount of pressure before pushing to open. A favorite running gag for the bar is a chalkboard noting the number of people who come actually hoping to have their hair cut. 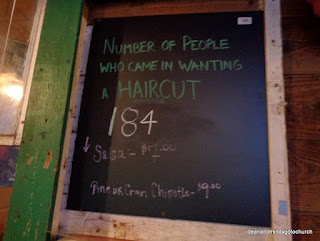 Many bars claim to be welcoming to all, but here that "all" seemed to really mean all. We saw a couple of children in the bar (which is apparently okay as far as local law was concerned) and dogs were made welcome as well. 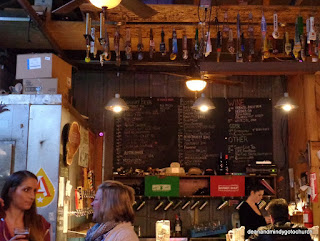 Mixed drinks and wine weren't to be seen on the menu, but Mindy and I tried the ciders. (Mindy enjoyed my choice of Strongbow Gold Apple over her Austin Eastsider Original. Don't tell anyone, but mine came from New York.)

We did have our two questions to ask, and we figured a good place to start would be with the group of far from shy guys outside in the porch area in front of the bar. They quite amiably let us interrupt their conversation. 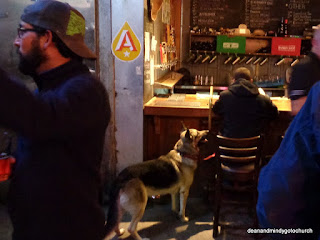 So we asked, "What makes for a good bar?"

One guy's answer was simple, "Cold beer."
Jackson answered, "Depends. Are you looking for a party bar or an after work bar? This is a good after work bar."

Another guy in the group, Kyle, said, "Good company. I came here because I knew I'd see people I'd want to hang out with. I didn't know the exact people that would be here, but I knew there would be people I'd like to be with." 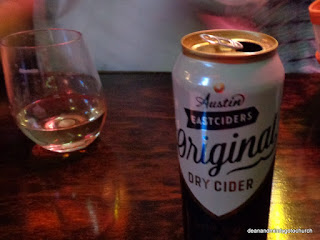 Our second question, "What makes for a good church?" was met with a quick response as well. In fact, some of the guys started their own conversations about religious and spiritual issues.

Brian said, "I'd look for some small, out of the way church in the middle of nowhere, because they'll be a tight-knit group and that'll make you feel at home."

Jackson agreed with that and said, "I like the cowboy churches where you sing and pray and then you might get something to eat. They don't judge you like the Baptist or Catholic churches." 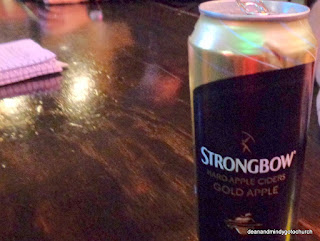 I talked for a little while with Kyle, who told me a bit about his religious background and upbringing, "When I was a kid I went to a lot of different places, Mormon and Catholic, because I moved and was with Child Protective Services. So one time when I was 15 I was in a group and they were going around the circle and asking who wanted to go on a mission trip, and everyone said 'Yes' but I said 'No' because I was finally with my father and mother again, and they were working things out. So I felt really alienated out. I think a church should be good people coming together who don't want to be negative." 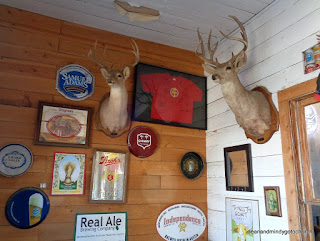 He talked about how church shouldn't be about rules, and I agreed with him, suggesting church should be about relationships: with God through Jesus Christ and with each other.

About that time, Mindy went inside to find that our friends Julie and Dan were already there. We joined them and had a good time talking. Then Julie and Mindy proved again their generous and gracious nature by letting Dan and I stay to talk while they went home to work on dinner. As Dan and I talked, I noticed the bartender doing a great job of cleaning up glasses and cans while also taking care of what was at times a long line of customers. 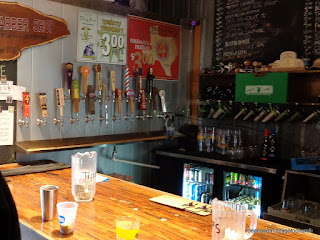 When she seemed to have a moment free, I introduced myself to Alisha the bartender. She seemed amused by our quest of a bar and a church in every state and cheerfully answered my questions between drink orders. In response to what makes for a good bar, she said, "A good bar should make you feel at home. I know the name of most everyone who comes in here, and I know what they drink, so I'll have it waiting for them. Oh, and beer. We have a lot of choices in good beers." 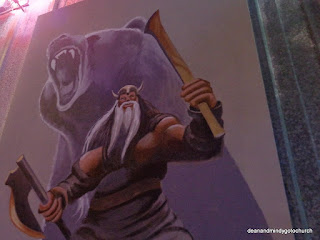 As for what makes for a good church, she said, "What would make me want to go to church? That's a hard one. Maybe if it was open minded and let you share your thoughts and feelings without being judged. I lived in Utah with the Mormons and New Mexico with the Catholics, and I've been with Baptists. If you'd convert to be like them they'd be all over that. But I wanted them just to accept me for me." I could be wrong, but I think Alisha was saying she would be interested in a church that welcomed people with the same grace and friendliness she showed people who came into the Barber Shop. 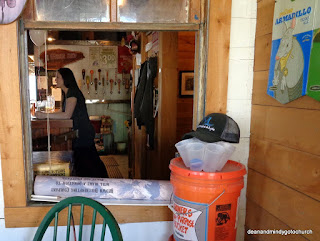 Posted by churchandstates at 8:24 AM
Email ThisBlogThis!Share to TwitterShare to FacebookShare to Pinterest
Labels: 2016, bar, Texas