Being Welcomed to a Movie

For some, movie watching is an isolated event, especially watching a movie on television. But there is a long tradition of hosts who keep home viewers company along with Bogart and Bacall and Don Knotts.

The first TV host I remember watching as a kid in the San Francisco Bay Area was Pat McCormick hosting KTVU’s Dialing for Dollars. When I was home sick (or faking sick), Pat was a much better option than the afternoon soap operas. Old films were interrupted by commercials and McCormick phoning random people from the phone book asking if they knew the amount of money being given away (starting with $100 and going up into the thousands if no one answering their phones gave the correct amount).

I don’t really remember the movies I watched, but I remember McCormick because he also hosted kids’ shows in the afternoon: Captain Cosmic and the puppet show Charlie and Humprey. 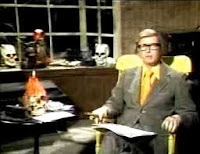 But then KTVU added another movie host with movies I do remember. Saturday night became the night for Creature Features with host Bob Wilkins. Many horror hosts of that time had their hosts take on phony names and creepy personas (such as Sammy Terry in Indianapolis, whose real name was Bob Carter. He attended the same church as my wife Mindy did). Wilkins was just a guy with his own goofy persona, wearing thick glasses and smoking thick cigars.

He would interview horror celebrities (Anne Rice plugged her new book, Interview With a Vampire) and talk about upcoming films (I remember him talking about an upcoming sci-fi film, Star Wars, which I had doubts about because the big ape’s costume wasn’t as cool as the apes in Planet of the Apes.)

Usually, my parents wouldn’t let me stay up for Creature Features, but I could watch it when I stayed overnight at Pat Haskins’ house.

I can’t forget the movies Wilkins showed. He had some classics that he praised, such as the Universal Monster films like Frankenstein and The Wolfman, but he also mocked the bad films he showed like The Vulture and Horror at Party Beach. I loved watching the bad as much as the good. 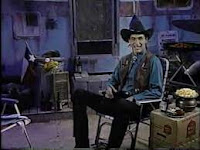 It was some time later that I found my favorite movie host in the newspaper. A syndicated columnist named Joe Bob Briggs claimed to be the nation’s foremost drive-in film critic. He wrote about films that tended to be ignored, such as Street Trash or Basket Case or Humanoids from the Deep. He would rate these films by the number of dead bodies, car crashes, and breasts, but most of the paragraphs of the articles were tales of his red-neck adventures at drive-ins, bars, and football games.

We were only in that apartment for a year, so I didn’t regularly see Joe Bob. We tended not to have cable through the years, so I missed MonsterVision, the show he hosted on TNT.

But I’ve been watching Joe Bob again on Shudder (the streaming horror channel that’s a subsidiary of AMC). The show’s called The Last Drive-In, and as in the days of ye old Creature Features, there are many bad films (looking at you, Sledge Hammer and Spookies) and some genuinely good films such as Train to Bushan, Heathers, and One Cut of the Dead. 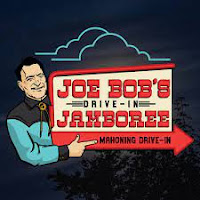 This coming weekend, Mindy and I are going to see Joe Bob Briggs as he hosts movies in person at the Mahoning Drive-In in Lehighton, PA. The first night he’ll be giving a lecture on “How Rednecks Saved Hollywood” followed by what Joe Bob calls the greatest film ever made: Smokey and the Bandit. Over the weekend there will be plenty of films, good and bad, concluding Sunday night with two films that could have played on Creature Features: the Vincent Price classic, House of Wax; and the greatest giant ant film ever made, Them.
Of course, instead of the viewers being home alone, Joe Bob will be hosting hundreds of fans together, proving the truth of Joe Bob’s mantra, “The Drive-In will never die!” And neither will movie hosts, I hope.