Joe Bob says, “Check It Out”
Joe Bob did suggest checking out Part 2 of this story on Twitter. You can catch up with the story in Part 1, Part 3, and Part 4. 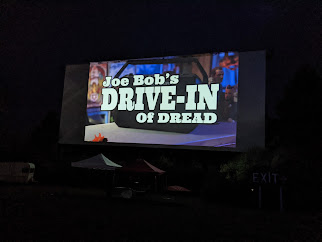 When we met Joe Bob on Thursday night, I’d told him that one of our priorities on this trip was to go to church Sunday morning. On our 2016 trip to visit a church (and bar… and movie theater) in every state, we went to a truck stop chapel for our worship service. But that Sunday, the only people in attendance were the chaplain, Mindy, and me.
Joe Bob pointed out that when missionaries started work in a village they publicized the time and place of meetings. If no one came, they would go ahead with the service nonetheless. We appreciated his point, but we were still set on going to church in Lehighton. 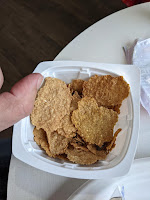 So after a restful night (and showers), we enjoyed our hotel breakfast (my bowl of Raisin Bran had the biggest flakes I've ever seen), packed up, and headed back to drive-in territory.

The Lehighton town square is surrounded by a number of lovely and imposing church structures. We opted against the Episcopal Church that announced a 1 am service on their sign. There was a Presbyterian Church, but (as we told Joe Bob) that's where we worship almost every week these days. We also considered  Bethany E.C. Church, Zion Church of Christ, and The Peter and Paul Roman Catholic Church. 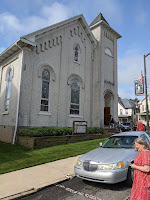 We decided on Ebenezer United Methodist Church because the 9:30 service time worked for us, and we appreciate the boldness of any church that continues to use “Ebenezer” in its title (though the word, of course, means “a commemoration of divine assistance,” most folks only know it as Scrooge's Christian name).

Only a score of people were in attendance, but they certainly outnumbered 2016's truckstop service. The organist was out of town, so musical accompaniment for hymn singing was provided by Youtube (with the pastor’s wife manning the laptop). Pastor Dale gave an encouraging sermon, and the people were welcoming. We had a good time talking with people at the snack/fellowship time following the service, too. 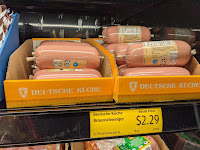 There was still an hour or so before we could get back into The Mahoning, so we went to the local Aldi supermarket (not something found where we live, and Mindy insisted). To my great delight, they had large, cheap tubes of braunschweiger. I can find liverwurst, but never braunschweiger in Seattle. Bless these Germanic peoples! The store also had boxes of discount donuts, so we bought a large supply to share with fellow campers the next morning.

We drove back to the drive-in and set up our tent in a different spot -- one on a little higher ground -- but left our sleeping bags and pillows in the Rogue. We were careful to be on site as early as possible because we'd seen this information on the Jamboree website among the privileges for those with VIM (Very Important Mutant) tickets: "Exclusive on-set photo op by a professional photographer with Joe Bob and Darcy under the Mahoning’s famously massive screen. The 8x10 will be printed immediately afterward. Digital copies will be available for an additional fee. (Please note: V.I.M. ticket-holders must be on the lot by 1 p.m. to take advantage of the photo op.)" 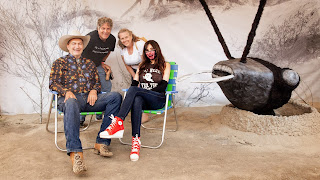 That's not exactly how it worked out. We asked staff (Mahoning staff and Shudder staff) about where we were to line up for the photo op. There was a wonderful set built complete with giant ants (in honor of the giant insect classic playing that night, Them!) We were among the first in line, but we weren't sure it was the right line. Some people said it was the autograph line. There was much confusion.

Unfortunately, there was even some question of whether Darcy would be able to join Joe Bob for the day’s events. Word was circulating that she was under the weather and might not be coming back that day. Darcy was, in fact, not well, but she came out, donning a mask (a mask with a sinister smile).

The photographer set up while we waited in one of the two lines that eventually formed outside the snack bar.  They first took pictures of the Mahoning staff behind Joe Bob and Darcy, who were seated in folding lawn chairs. We saw that no 8x10 photos were being printed up “immediately afterward.” We soon took our place for photos but no one asked for our names or did anything else that indicated our photo would be easily separated from others.

Eventually, all the photos taken were posted online, therefore our digital photo was “free,” but this was not at all as advertised. I certainly understand the difficulties of pulling off something like this, having been involved in countless youth events through the years. This was the first time for the Mahoning and Shudder to work together on an event of this scale and there were bound to be bugs (not just giant ants) along the way. And it was a little sad to hear the drive-in staff blaming Joe Bob’s crew and vice versa. All things considered, though, they all did amazing work. And really, we prefer digital copies to printed ones. 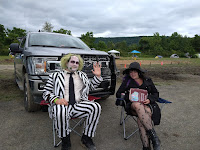 While we waited in line, we watched the crowd for cosplayers. Beetlejuice and Lydia were there all weekend as was an Incredible Two-Headed Transplant Patient (who hawked Mutant Mama “cannibal” goods), but there were more around on Sunday, including Carrie and Tommy (from 1976’s Carrie).  I wore a raptor mask as the VelociChaplain, an homage to 2018’s The VelociPastor. We were disappointed that we missed the call for cosplayers to gather in the early evening. 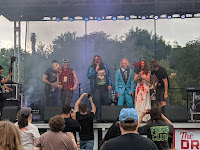 The Last Drive-in producer John Brennan also leads a band, The Bigfeet. I missed out on joining other cosplayers when he called them to the stage, but it was still great fun to hear the band play the show's theme song, "Joe Bob is Back in Town" and to hear the audience shout the Drive-In Oath: “Blood, Breasts, and Beasts!” 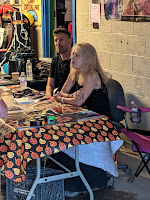 I was delighted to find that Linnea Quigley had remained and was signing autographs in the snack bar. She was quite gracious with all who came along. I didn’t get an autograph, but it was still fun to be able to greet Spider of Sorority Babes in the Slimeball Bowl-O-Rama.

It was apparent we wouldn’t have another opportunity to talk with Joe Bob and Darcy. The demand was overwhelming and had run the two of them ragged, but we had brought a couple of items we wanted to pass along to them. Fortunately, a staff member for Joe Bob was taking in quite the haul of items for them. (FWIW, our son wanted to pass along a copy of Chainsaw Man to the world's foremost scholar of The Texas Chainsaw Massacre and I wanted Darcy, the hostess of the Mutant Family to have a copy of my book, Attack of the Mutant Fruit).
The evening’s event was a wonderful thing. It was promoted as the family-friendly event of the weekend, featuring two 1950’s classics: House of Wax and, as previously mentioned, Them! When darkness fell, Joe Bob’s Drive-In of Dread began.

Joe Bob and Darcy appeared on the Mahoning big screen, supposedly live from the projection booth (though I could have sworn I simultaneously saw a much more weary version of the duo still signing autographs in the snack bar). 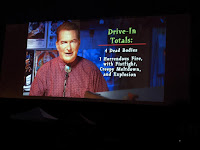 As Joe Bob was introducing the first feature, Darcy was trying to warn him (and the audience) about reports of strange creatures coming toward the drive-in. She seemed very concerned, but Joe Bob went on with his drive-in totals (the numbers of dead bodies, fights, and assorted carnage to anticipate in the film).

In the promotional material, all were warned that mutants would be roaming the drive-in and that if we wanted to avoid being startled during the show we should let them know ahead of time. But why would anyone want to spoil the fun?

As he does on The Last Drive-In, Joe Bob interrupted the film to provide trivia and rants on a variety of pet peeves, but Darcy continued to warn about the coming peril even as the projection room underwent mutant attack. 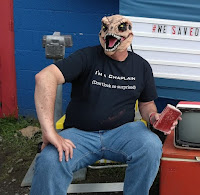 As we sat in lawn chairs by the Rogue, mutants snuck up from behind us for cheap but satisfying scares. Mindy screamed all three times she was surprised, but each scream was followed by laughter (on her part. And mine).

It was a wonderful night, a very fun way to close out the event. By the time the second feature ended, Joe Bob and Darcy had turned in for the night for a well-earned rest. For the first time of the weekend, Mindy and I slept well in the tent. In the morning we shared our donuts and then made our way to the airport (after another stop at the laundromat). 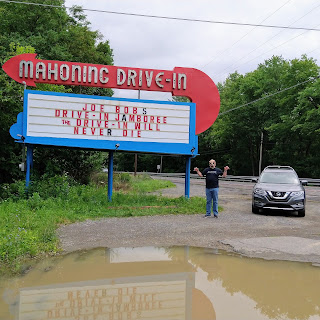 So concluded the First Annual Joe Bob Jamboree, and a good time was had by all. The Mutants had a chance to meet in person rather than online, and a community was made stronger. Will there be a second Jamboree? I have no idea, all I know is what Joe Bob says is true, “The Drive-In Will Never Die!”