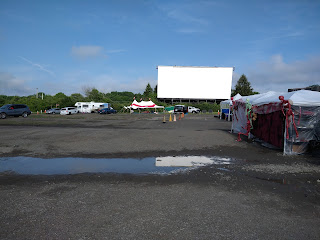 (If you want to catch up on the saga, go to Parts
One, Two, and Three)

One disappointment about the trip came when Mindy couldn’t get tickets for Saturday. The day's events, including a live episode of The Last Drive-In, were the biggest draw of the Jamboree, and tickets sold fast. All kinds of activities were planned for the afternoon and evening, including photo ops and other activities around the drive-in property. We heard they expected the biggest crowd they'd ever had.

Which meant we had to clear off the lot by 11:30 am, but as I mentioned in part 3, the car wouldn’t start. A dead battery seemed like the most likely cause, but the Rogue dashboard was giving messages like “Key not in ignition” for a keyless start vehicle and “malfunction.” Even though many of the staff and volunteers (and other Mutants) kindly offered a jumpstart, we were uncomfortable thinking of liability issues with a rental.

So we called the rental car company, and they called an AAA truck. We told Mahoning staff that a truck was coming (and they let us know which entrance the truck should use, but on the phone, the driver assured me he'd jumpstarted and towed cars at the Mahoning many times.

I used Mindy’s phone to make all these calls. My phone kept informing me it had moisture within -- and it was no longer charging. When I'd gotten soaking wet the day before, the phone hadn't had a happy time either. I had to nurse its limited battery life for the remainder of the trip.

The AAA tow truck came and a jumpstart did the trick. Our tent and sleeping bags were packed, so we drove to the nearby campground where Mindy had made reservations months before. While I stayed in the car to keep charging the battery (and incidentally enjoying the air conditioning), Mindy searched for the park hosts. We learned that the tent site was on a hilltop and wouldn’t protect us much from predicted strong winds (or the rain that was also expected).

We decided to forfeit our campsite deposit fee and find a hotel -- hot showers and clean sheets sounded a lot more pleasant than wet sleeping bags or another night in the Rogue. 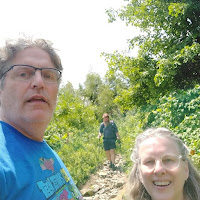 Finding a hotel took some time. From what we could learn with phone calls and internet searches, there weren't many rooms available nearby. Eventually, we found a Sleep Inn 45-minutes away that had one room remaining.
As we drove the back roads from Lehighton to Allentown, we noticed a sign for the Appalachian Trail. We pulled off the road and found the trailhead a few steps away. We were happy to see full water containers under the signboard and walked a few feet along the trail. While we were taking a selfie, a hiker came up, so we chatted for a minute before moving on. It was very hot, and he still had a long way to go before nightfall. 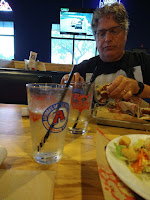 Our hotel room was all we expected (clean, dry, and containing a bed and an indoor toilet). We walked across the parking lot and enjoyed dinner at Aroogas (we recommend the Amish Pierogies). As it turned out, that night's storm wasn't much, but we appreciated the bed and the showers anyway.
The next afternoon we heard that on Saturday night, Joe Bob and Darcy had hosted Linnea Quigley and featured Quigley’s beloved zombie parody, Return of the Living Dead. We saw our new friend, George, who told us that several things were said that would definitely need to be edited out if the event is aired on Shudder. Once again, Joe Bob and Darcy had made themselves available after the show until the sun was about to rise.

It all sounded delightful, but as far as we were concerned, the delights of spending the night at Sleep Inn were a more than sufficient trade-off.
Posted by churchandstates at 9:47 PM
Email ThisBlogThis!Share to TwitterShare to FacebookShare to Pinterest
Labels: Appalachian Trail, Car Trouble, Darcy, Joe Bob