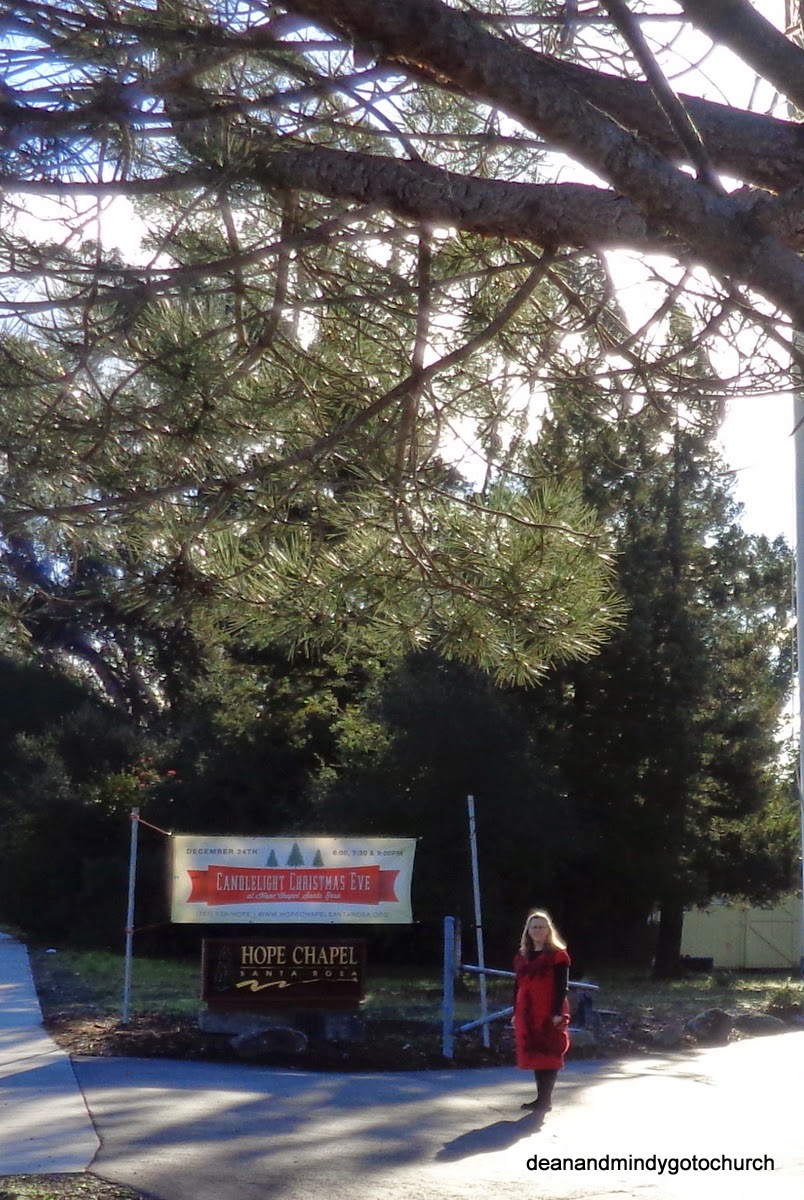 You know how you look at old photos and notice changes in yourself, in others, and in the places you're looking at? Reposting these old church and bar visits is kind of like that for us. We visited this church in mid-December, 2014 -- and we still think their way of welcoming visitors was especially thoughtful.

Hope Chapel, Santa Rosa, California
Mindy and I started visiting churches in August, 2013, though we waited more than a year before writing about them. In other words, we didn't write about some churches we really enjoyed -- churches that really impressed us. On the flip side, there are churches that had borderline heresy (or just off-key worship teams), and it's just as well we didn't have to mention them. 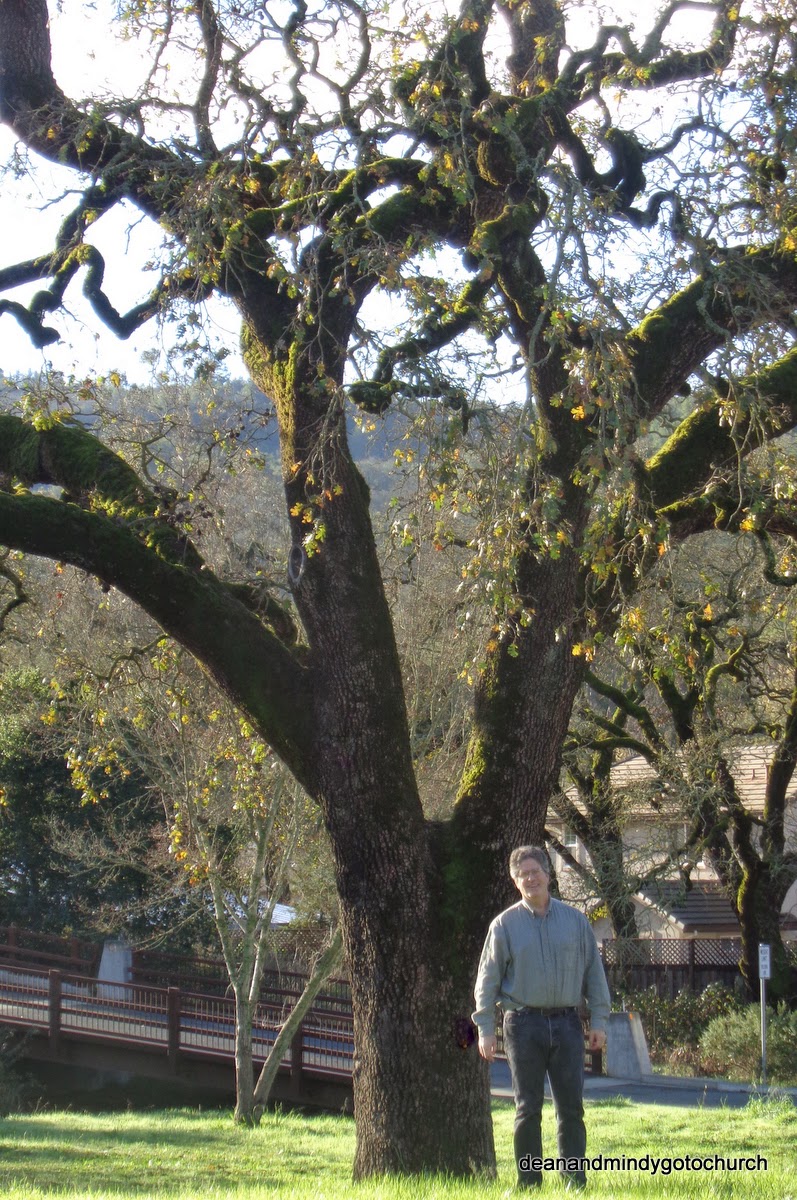 Three of the congregations we most enjoyed worshiping with during that year were Foursquare Gospel Churches. It would have been fun to write about the Sanctuary in Windsor or the Lighthouse in Santa Rosa or Hope Chapel in Healdsburg (pastored by our friends, Mark and Lynn Williams*). But we get to do the next best thing -- write about Hope Chapel in Santa Rosa. Not only does it share a name with the Healdsburg church, but it's also the mother church of the Sanctuary and the Lighthouse. 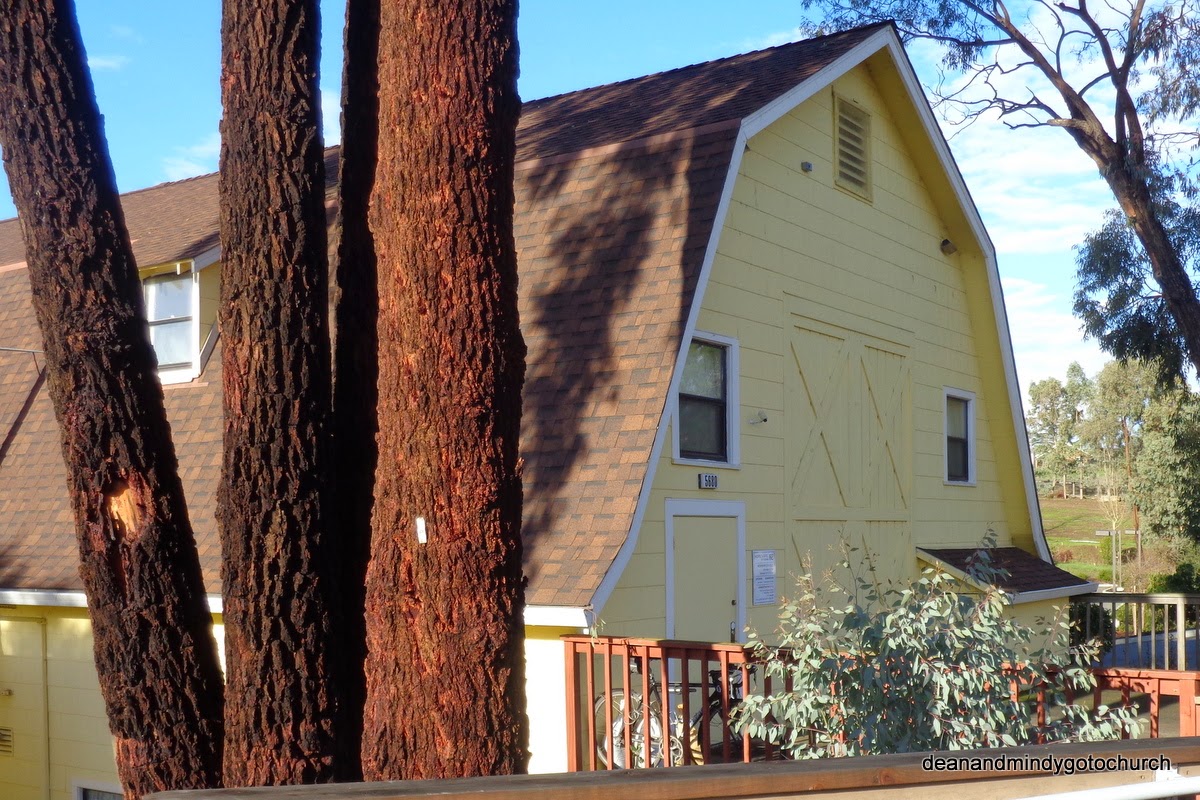 I don't mean to be snide about this, but a sure sign of God's grace and provision is the good health of the Foursquare Church, considering its almost soap-opera-ish origins. The denomination was founded by Aimee Semple McPherson, arguably the most popular evangelist of the 1920s. She was also at the heart of a number of scandals, including a disputed kidnapping and multiple marriages. (Henry VIII and the start of the Anglican Church gives McPherson a run for the money, but...) Today, though, it's a healthy denomination with 8 million members in 60,000 churches in 144 countries -- including Fiji. 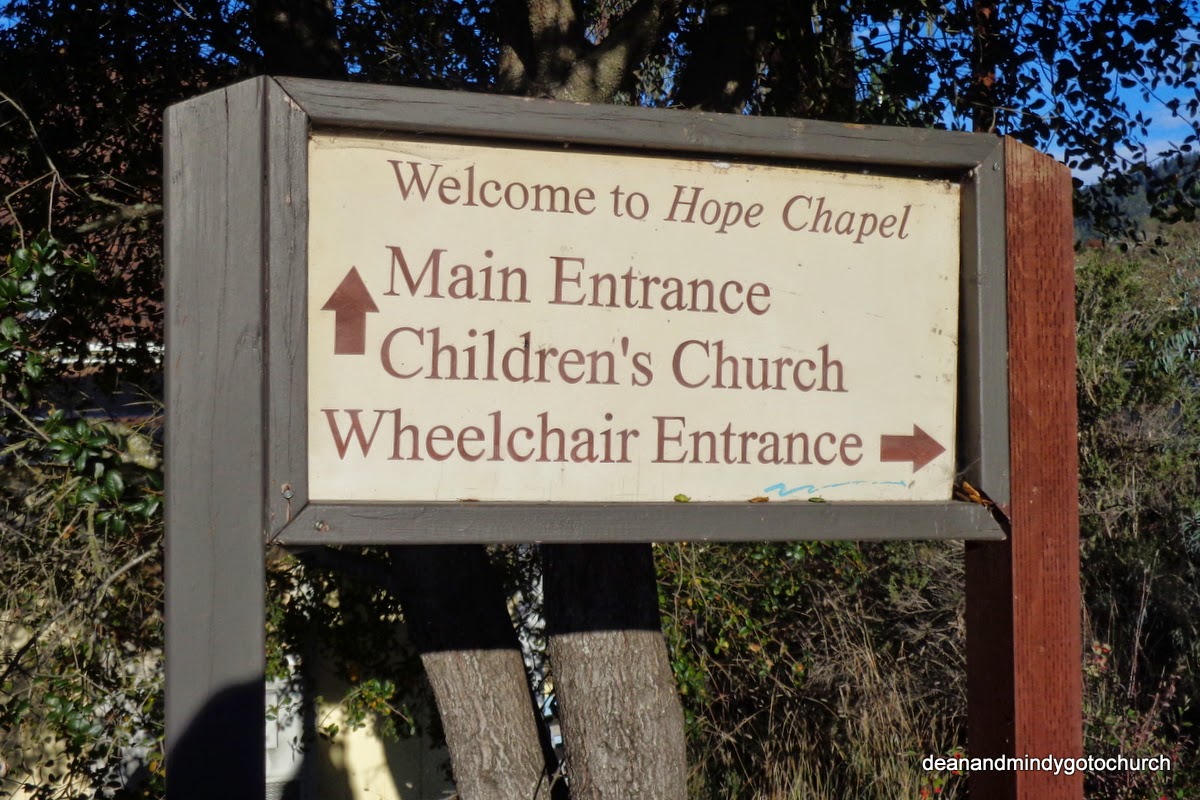 Hope Chapel, Santa Rosa meets in what looks a bit like a barn in a beautiful setting. The interior is small but comfy. Through an internet mishap (I could swear I read 9:30 am, but no, everything online actually says 9:00 am) we arrived late. I thought they had started the service five minutes early, which would have been quite a first for a church. I thought we walked in during the opening prayer, but it was a mid-service pastoral prayer. We were surprised that there were announcements and then a sermon, without music. A look at the bulletin revealed our mistake. 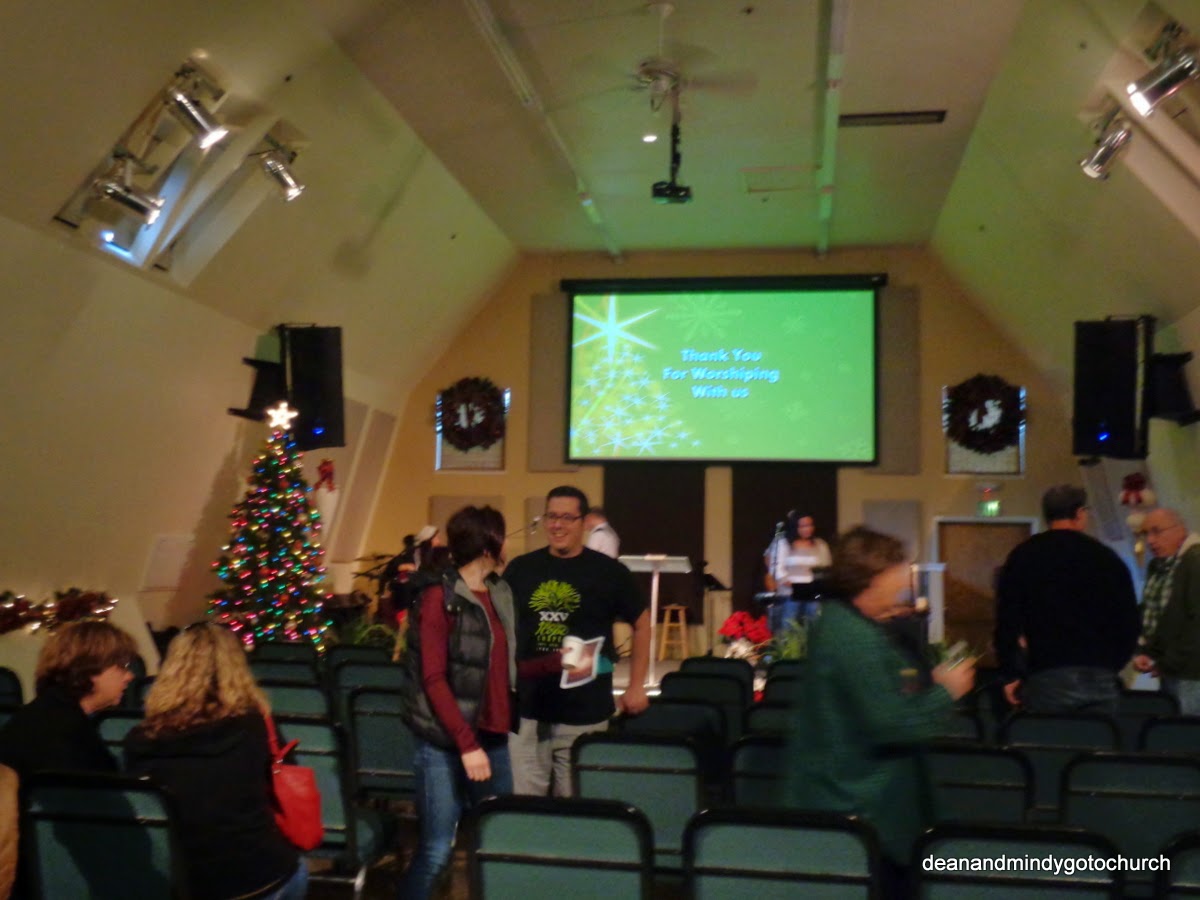 So after the sermon and closing song, we waited for the second service. It's kind of like when you miss the first part of a movie and you wait for the feature to start again so you can see what you missed. Being there for two services was a good reminder for us of how haphazard a one service critique can be. I believe the order of service was the same for both services, but since there were about fifty people in the first service and more than twice as many people in the second service, they felt very different.

With fewer people, a worship service often feels intimate, sometimes more contemplative. With more people, a worship service often feels more energetic and exciting. And that's with only one change -- the number of people. There are so many variables that can change Sunday to Sunday, so our finger to the calendar means our experience isn't exactly authoritative. Doesn’t mean it’s not interesting, though.

The worship team was solid with good use of harmony. At least one of the songs was, I believe, written by the worship leaders. We sang only one Christmas carol (“Angels We Have Heard on High”). We also sang the Lincoln Brewster-baptized, Christianized version of Leonard Cohen’s “Hallelujah” (which give us a sense of what people felt like when they heard a Lutheran hymn with a tune they recognized from the tavern).

The sermon focused on how we should live as we await the Pre-tribulation Rapture. There were many Scripture references (with which the overhead outline had a hard time keeping up with, but most were listed in the sermon notes in the bulletin). The sermon concluded with a prayer that included an invitation to salvation.

I very much enjoyed the announcements: one introducing new leadership, with an emphasis on the qualifications in I Timothy 3, followed by voting to ratify the nominated leaders. Another announcement included a video of the pastor's recent trip to Fiji for a church conference. 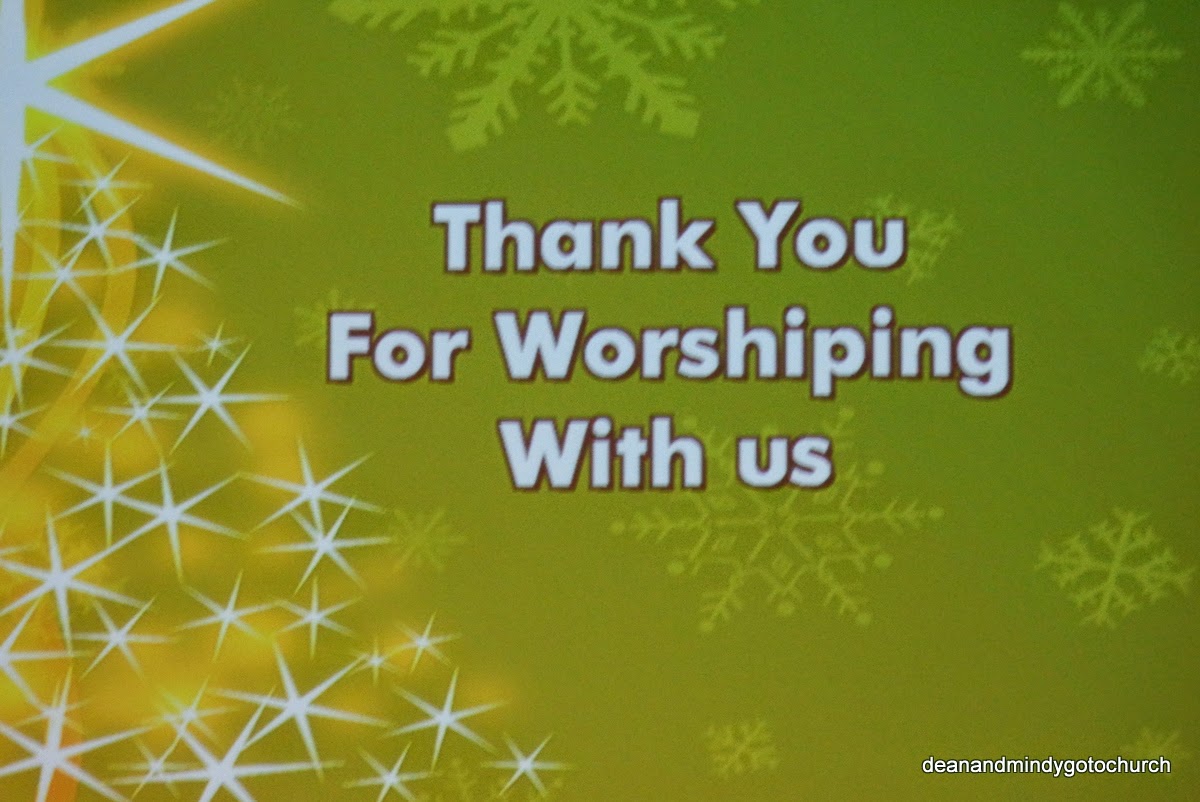 For those keeping score at home, the Foursquare Gospel churches in Sonoma County received an impressive 4 for 4 in our visits for encouraging worship experiences.


*in 2017, we were able to talk with Mark and Lynn Williams about one of the ways Hope Chapel Healdsburg was able to serve their community. You can read about it here.
Posted by churchandstates at 8:58 AM
Email ThisBlogThis!Share to TwitterShare to FacebookShare to Pinterest
Labels: 2014, California, Foursquare Church, Santa Rosa