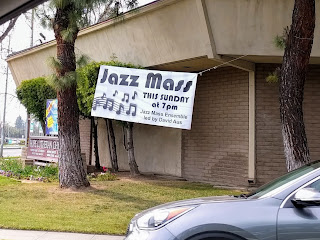 The song was a part of the Sunday evening Jazz Mass. When we came into the sanctuary (a little early), two of sections of pews were roped off. The musicians were practicing, obviously enjoying playing and each other. As more people arrived and filled the rest of the room, the ropes were taken down. 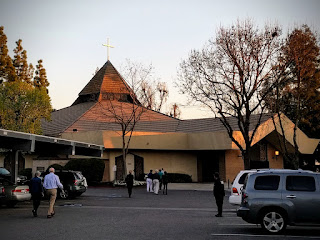 I should admit up front that Mindy and I aren’t big jazz fans. There are performers we like -- we’ve listened to a lot of Ella Fitzgerald and Louis Armstrong, and we liked Whiplash -- but if we come across a jazz station on the radio, we’re likely to turn the station to rock or classical (but not country). We find the music to be a little more fun when we get to see the performers enjoying themselves and each other. 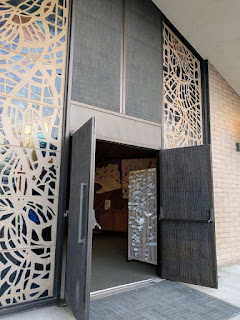 The jazz combo opened the service with a piece called “Psalm 23:1” by Pete Malinverni. Malinverni wrote pieces about the whole Psalm, and more of it was used later in the service after the sermon. Even more unusual and interesting was the call to worship, a work called “Angry.” Many times, especially in church, people don’t like to acknowledge their anger, but the Reverend Stephen  Carlson introduced the piece by saying, “Bear with us while we get something off our chest.” “Angry” is an original composition by David Aus, who was also the musical director and pianist of the evening. After the piece, Carlson said, “There, I feel much better now.” 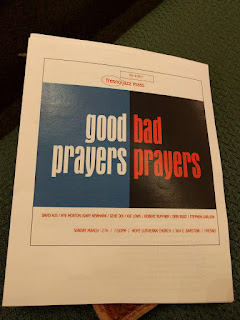 Almost as surprising as the call to worship was the choice for the Scripture reading, Psalm 109. Psalm 109 is one of the “Imprecatory Psalms,” as they were called in seminary. It’s one of the Psalms that call down curses on other people. It’s the kind of Psalm that tends to be neglected in churches, but that people find themselves spontaneously praying all the time in real life. Pastor Carlson never used the word “imprecatory,” instead, he called it a “Bad Prayer.” 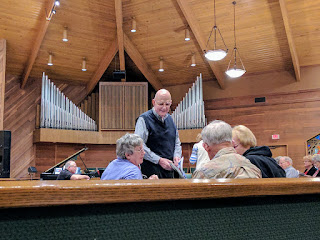 Psalm 109 isn’t as harsh as some others in the book, but it does include the psalmist's request that God would “Let my assailants be put to shame… May my accusers be clothed with dishonor.” Pastor Carlson pointed out that when we hear this we think, “That’s not nice; that’s not Christian.” 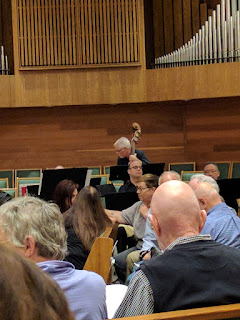 It’s hard to figure out what to do with those Psalms, and even more difficult to know how to think about the Psalms that talk about throwing babies against the rocks (as Psalm 137 does).

So Pastor Carlson asked, “What do we do with these prayers?” He began by saying that we need to admit that we all have these dark feelings. I appreciated his opening up to admit the dark feelings he had toward his former brother-in-law who was unfaithful and abusive toward his sister. It’s not far to go from those feelings to wanting to “ask God to be our hitman.” 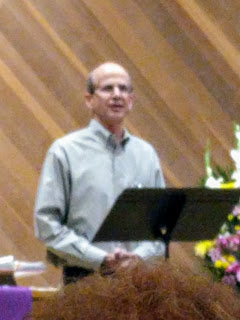 He pointed out that just because we pray for something doesn’t mean God will do it, but he said that praying these prayers does serve a purpose. First of all, they remind us of the power of sin. And, he said, we need to learn to give our pain over to God. We need to express those feelings,  and bringing our pain to God is bringing it to a safe place. God loves us, He knows our junk, and we aren’t going to hurt Him by bringing Him our pain.

Pastor Carlson contrasted this “Bad Prayer” with the “Good Prayer” of Psalm 23. He noted that it’s unfortunate that we’ve come to associate “The Shepherd’s Psalm” with death because we’ve heard it used so often at funerals. He said that this is a Psalm for life. We have a Good Shepherd who died for our sins, and He reminds us that His love and power are greater than our sin and pain. “Bad prayers lead to Good Prayers. Thoughts of vengeance lead to forgiveness.” 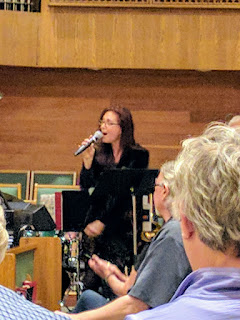 Which led to communion. “You don’t need to be a member of this congregation, you don’t need to be a part of this denomination, because Christ is our Host,” Pastor Carlson said in the invitation to Communion. Ushers directed people to go forward for the sacrament, and they had quite the traffic cop skills. There was a choice for grape juice or wine and wheat or gluten-free bread.

Vocalist Debi Ruud, who had sung “Go to Hell” earlier, closed the service with the song “Prayer Changes Things” which was popularized by Mahalia Jackson. It was lovely, but I missed having congregational singing during the service. We did participate through responsive reading and interactive prayers. 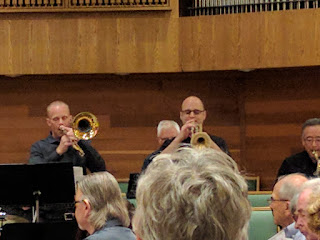 The postlude was an instrumental version of “I say a Little Prayer.” I’m not sure, but it may be one of the first times I’ve heard a Burt Bacharach piece in a worship service -- as it was the first time we’d heard a Nina Simone song in church (we heard a song of Mahalia Jackson’s in church just about a year ago). 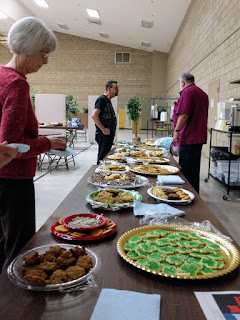 It was a nice opportunity to chat with people. I saw Eric, who I had shaken hands with during the greeting time in the service. I asked him if he regularly went to Hope, and he said it’d been his church for the last twenty years (calculating by the age of his children). For a time, while his kids were young and involved with various activities such as soccer, they weren’t making it to church as often. This hit home when the family was driving by Hope Lutheran and one of his daughters said, “Where do we go to church again?” Eric decided they needed to be more faithful to church attendance, and they have been. 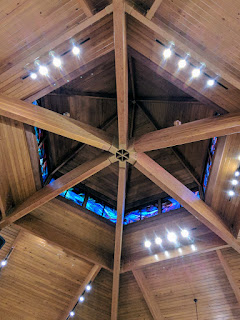 I asked what he appreciated about the church, and he said one thing was the pastor. The children’s and youth programs were another big factor in their devotion to the church. He said they’re good programs and that the church kind of has a motto, “Program it and they will come.”

The Sunday night Jazz Masses happen pretty much every month, and Eric said some people who take the morning off on Jazz Sundays in order to attend in the evening. 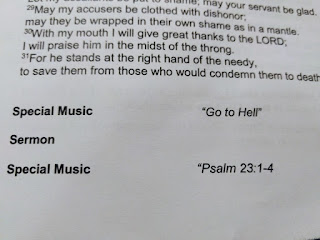 We did have a good time in the service, and appreciated that no one sang “Go to Hell” addressed to us personally.

Statistics
Service Length: 1 hour 9 minutes
Sermon Length: 15 minutes
Visitor Treatment: No particular notice of visitors, although the invitation to the Communion table was specifically extended to all, not just church members.
Followup by Tuesday Morning: none (but they didn’t know we were there)
Our Rough Count: 116
Probable Ushers’ Count: 125
Snacks: coffee, decaf, hot water for tea or hot chocolate, a wide variety of cookies and other sweets
Musicians: Standup bass (man) 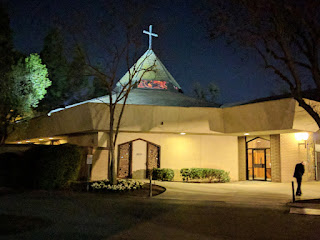