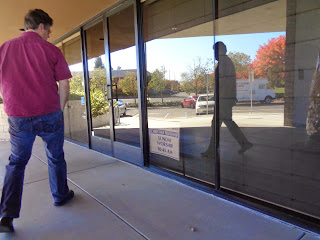 Did you read this post back in November of 2014 when we first published this at Dean and Mindy go to church?

Salvation Army, Santa Rosa, California
The title Saved by the Bell was really wasted on a sitcom about high school. It should have been used for a Salvation Army story.

A lot of us only know about the Army through the Christmas bell ringers. Some know the Army because of the thrift stores. But there's more, of course, to the organization than money pots and bargains. It's a charity, a business, and a church. We went to church on Sunday.

No problem finding the address and service time online, but once we were there we had a little bit of difficulty finding the chapel. We arrived about 15 minutes early and a sign at the door assured we were at the right place. Apparently, everyone was still in Sunday school. Eventually, a Salvation Army officer came out and directed us with a left, a right, and a left to the chapel. Once people emerged from the Sunday school class, we were greeted with warmth.

Early in its history (founded in 1856), the Army earned a reputation for rousing musicianship. They were famous for its brass bands. Rousing isn't the term I'd use for the music at this Sunday's service. Though most everyone joined in singing the choruses, it was far from rousing, and when we sang an old Salvation Army hymn, the piano intro made it as difficult to find the melody as it had been to find the chapel.

But there were some wonderful things about worshiping with the congregation this Sunday morning.  The Salvation Army does good work in recovery ministry, working with those who struggle with alcohol and drug addictions. About half of the congregation was composed of participants in the recovery program in Lytton Springs. One of the gentlemen from the program shared his testimony of God's work in his life, and another read scripture.

An elderly woman named Yvonne introduced the offering time, by saying that she'd heard that it's been said you can tell where someone's heart is by looking at their checkbook -- so she wrote a Scripture verse in her checkbook. We loved her fairly immediately.

The prayer time was open for sharing. One of the small group of teenagers in our row said, "We were bored yesterday, so we called the Lieutenants, and they asked us over, and we had a great time." That's the kind of thing anyone in youth ministry loves to hear.

The sermon, from 1 John 3 (and a variety of other texts) was preached by one of the Salvation Army officers, was sound if a bit scattered. The service closed with "Amazing Grace," which was a little livelier than music that came before.

As the service closed, I turned to see the nursery through large windows that opened into the chapel. A young woman sat, holding her baby girl. God's children gathered in this chapel, obviously loving and encouraging one another. May the Christian soldiers continue to move onward.

Service length: 90 minutes
Sermon length: 30 minutes
Visitor treatment: greeted several times before service started. Each first-time visitor received a blue ribbon, a handshake, and an introduction by name to the rest of the congregation. Because a large part of the group were visitors, this wasn't particularly embarrassing or awkward but welcoming.
Our rough count: 30-40 people
Probable usher count: 50 people
Snacks: cookies after, possibly coffee in a recreation room, but none in evidence in the worship service 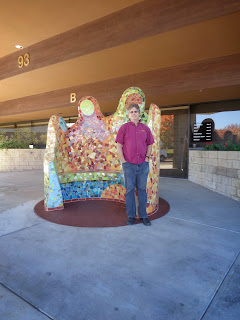