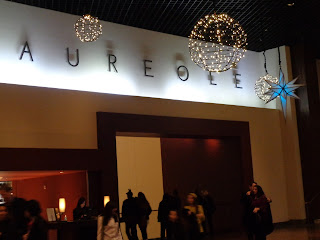 This was the first bar we visited on our epic year-long quest to visit a church and a bar in every state. Now that the project is finished (we're working on being regulars at a few local bars instead of visiting and writing about them), we're transferring old posts here. If you'd like to know more about our adventures in 2016, check out our book, Cheers and Amen.

There are times when we feel like we don't have a choice about the place we go, and that's a good thing.

Fourteen years ago, I began working at the Hotel Healdsburg, where one of the owners of the hotel and its restaurant, Dry Creek Kitchen, is Chef Charlie Palmer. He was a good boss and is a good guy, so I wanted a chance to go to one of his many other properties. 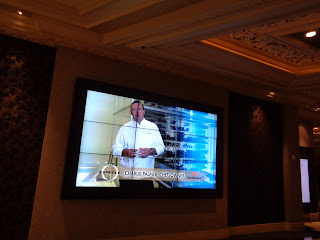 We might have gone to Aureole at Mandalay Bay even if it weren't for Charlie, because of a cool feature in the restaurant, the four story wine tower. I'd seen it on television back in the days when our daughters were hooked on the Travel Channel. (That wine tower, like allof America's prominent landmarks, has been replicated with Legos.)

After asking several people in Mandalay Bay for directions (and with detours in The Four Seasons), mangling the pronunciation of the name of the restaurant, we made our way to the reception desk at Aureole. The hostess directed us down the staircase to the Lounge, which is on the other side of the wine tower from the restaurant proper. 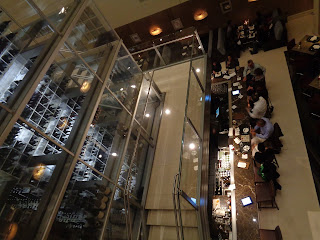 A few people were seated at the bar, but we found seats together at the end closest to the restaurant. The bartender handed us a tablet with the drinks menu and showed us how to swipe the screen to turn the pages. (We heard another guest request a paper menu, which was supplied).

Flipping through the by-the-glass wine list, we were glad to see Sonoma County represented along with European vineyards,but we thought it would be more fun to start the year with cocktails. The description of the Chocolate Martini sounded delicious, and since we'd already eaten dinner, it seemed like a suitable dessert. Mindy went with the Raspberry Lemon Drop. Both were delicious. 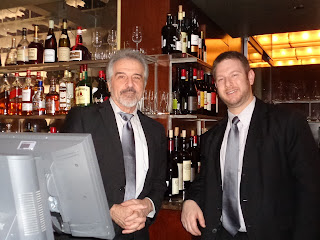 Two men were working the bar, Sal and Dave. Sal took our order and mixed our drinks. He's been tending bar for 35 years, and has been at Aureole since its opening seventeen years ago. He was the first person we asked the two questions that will be our standards for this blog and for Dean and Mindy go to church: "What makes for a good bar?" and "What makes for a good church?"

Sal quickly answered what made for a good bar. "Good bartenders. The ingredients for drinks are pretty much the same everywhere. The bartender makes the difference." 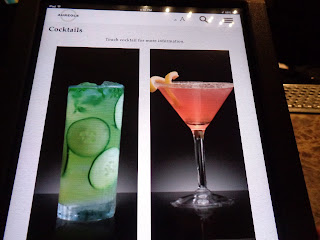 His answer about a good church fit with his first answer. "The pastor."

I asked Sal if the restaurant had changed over the years. He responded that when the place opened seventeen years ago, they were extremely busy six nights a week, but now, since many other restaurants have opened in the area, business has slowed some, though still doing well.

The bar of Aureole serves primarily as a source for serving the diners and secondarily serving bar patrons. Two people can usually serve the needs of the restaurant and the bar, but at peak times, a third helps them out. 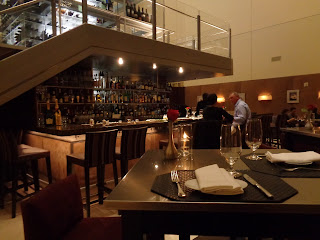 I asked Sal for favorite stories from his years of tending bar. He recalled an incident from his first year there:  a man planned to propose to his girlfriend and asked Sal to find him roses. It was after 11:00 pm when Sal was frantically searching the hotel for roses. The man paid generously for the roses, and at midnight, the man got down on one knee and proposed to his girlfriend. The woman said yes, taking the roses. It was a beautiful moment.

Unfortunately, at that same moment another woman wearing a short skirt walked by. The man's eye followed her. The new fiancee couldn't help noticing, and she showed her outrage with words and by beating the man with the roses. Soon rose petals and awkward feelings spread throughout the restaurant. 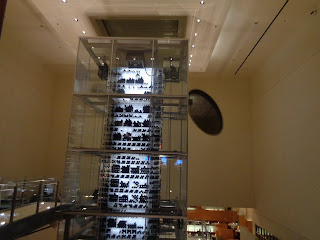 Dave, the other bartender, has been at Aureole for the last four years, and has been tending bar for seventeen years. He began at a small, family, Italian restaurant and later went to Applebee's.

He didn't speak badly of the chain, saying they make a good, consistent product. They don't give room for self-expression, though.

I asked Dave what he looked for in a good bar. He said it depends on what you're looking for, what kind of environment you're in the mood for. Sometimes, he said, you'd like to be someplace quiet with well-crafted drink. Sometimes you're in a party mood and want a festive atmosphere. 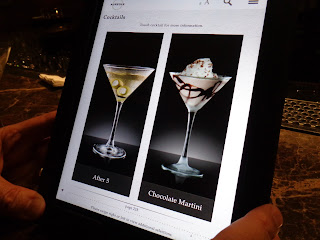 He was ready to recommend a number of other local bars that would match a variety of moods. 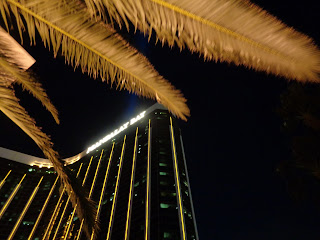 Aureole provided good drinks, conversation, and company to start a new year and, we hope, will be the first of at least 49 pleasant bar experiences. 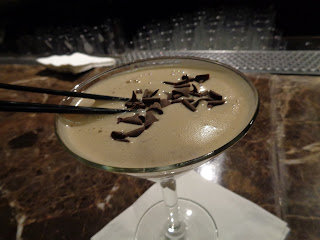 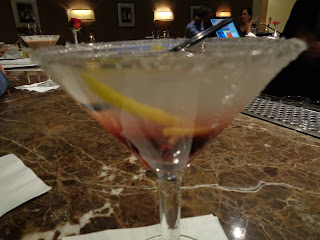 Visitor Treatment: Bartenders were attentive and friendly (the bar itself wasn't busy while we were there, but Sal and Dave took care of drink orders for the restaurant as well).
Miles from last bar visited: 0
Total 2016 miles driven: 28
Miles from start: 646 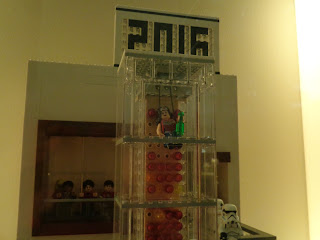 This post originally appeared on January 2, 2016. It was the first bar post at Dean and Mindy walk into a bar. We revisited Las Vegas bars during a sadly dramatic weekend in 2017.

Posted by churchandstates at 8:23 AM
Email ThisBlogThis!Share to TwitterShare to FacebookShare to Pinterest
Labels: 2016, bar, Nevada