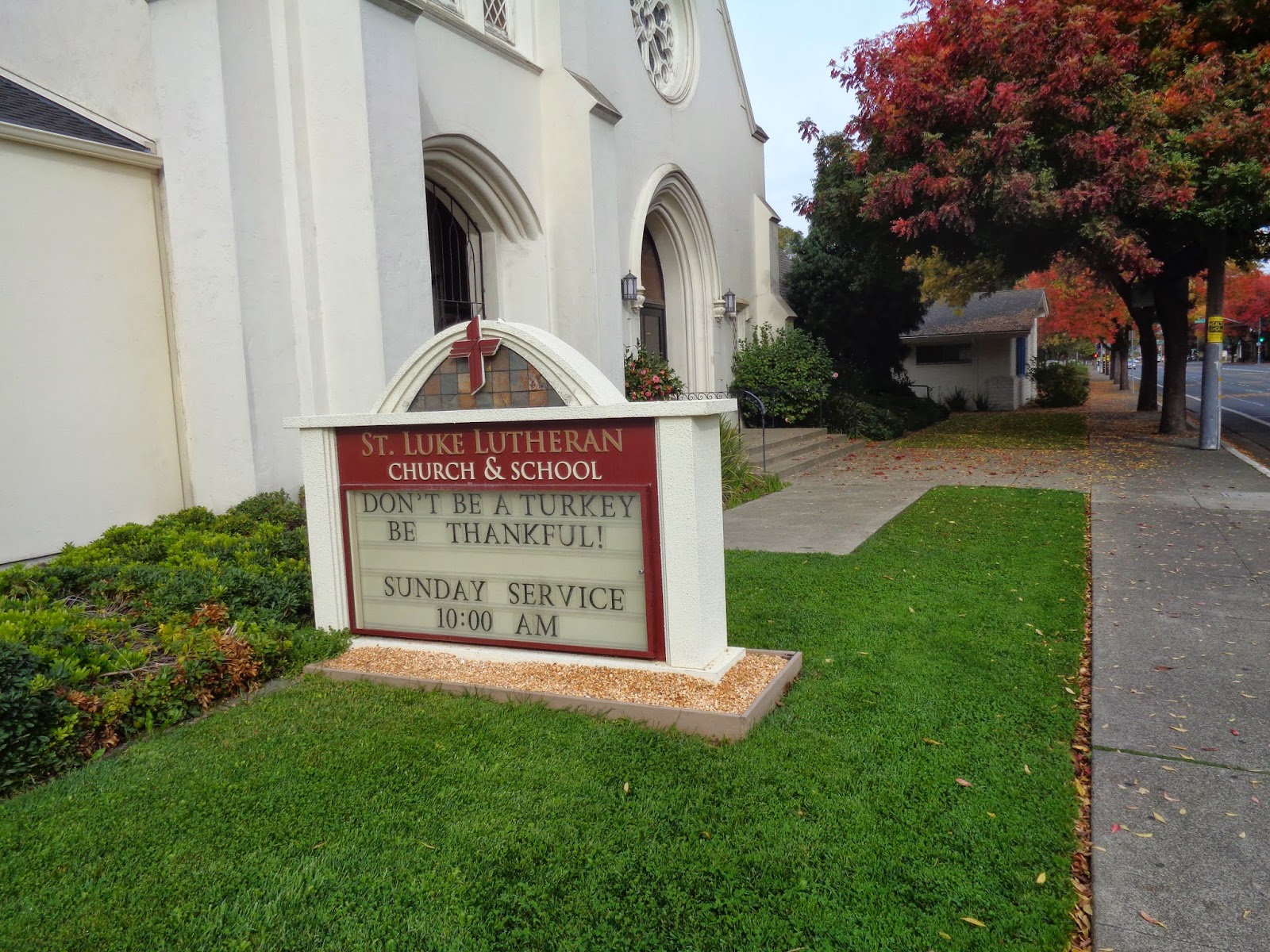 St Luke Lutheran Church, Santa Rosa, California
We're taking another look at posts from the early days of Dean and Mindy go to church and Dean and Mindy walk into a bar. This church, which we originally wrote about on November 18, 2014, might be the first Lutheran Church Mindy was ever in.

Sure, the Roman Catholic Church is the oldest, and various Orthodox churches can vie for second, but at nearing a half a millennia (if you mark the birth of the church with the Edict of Worms from 1521), Lutheranism is no new kid on the block. There are, as one would expect from the Protestant love of division, several branches of Lutheranism. This Sunday we attended St. Luke Lutheran in Santa Rosa, which is part of the Missouri Synod (a more conservative branch of the denomination). 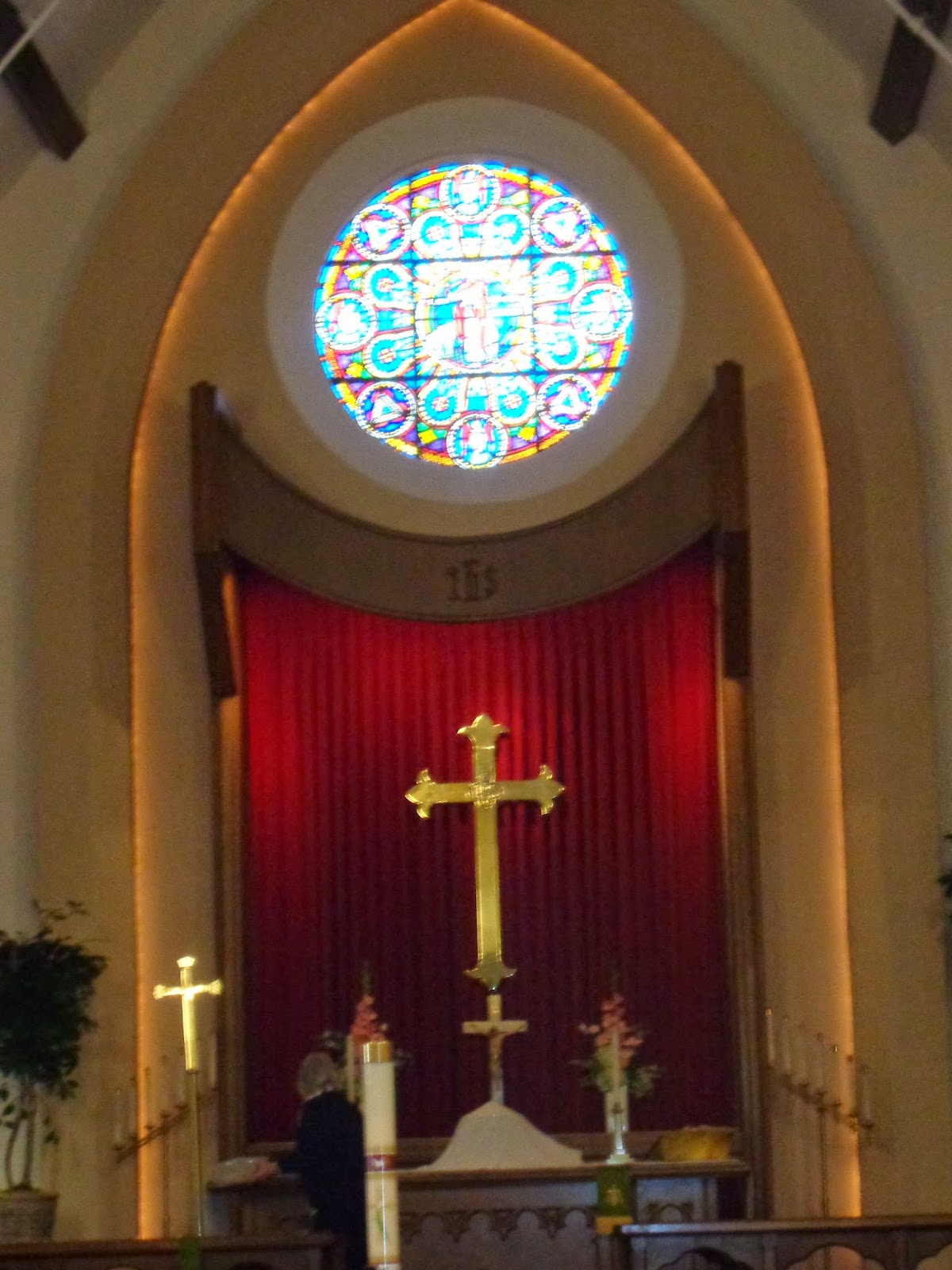 Upon entering the sanctuary, I was handed a quite large bulletin. Opening it, I saw it had large print for the visually impaired, so I traded it in for the smaller bulletin. Both versions were 12 pages thick with all the hymns (music and lyrics), liturgical readings, Scripture, and prayers included. No overhead screens here (which might hide the beautiful stained glass windows). 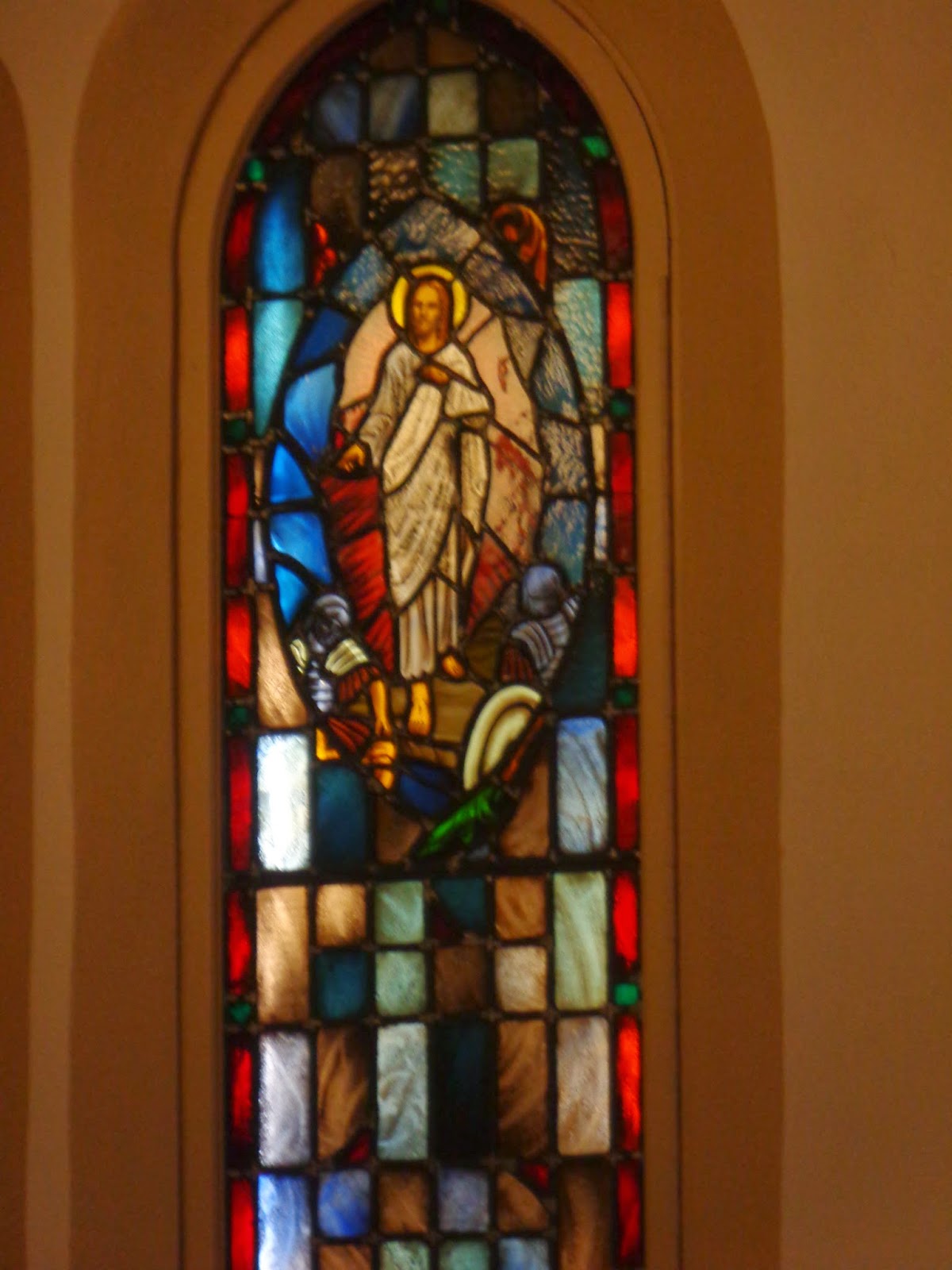 The majority of the congregation was elderly. Before the service began and during the time of greeting there was much noise and enthusiasm (but no music), and it took a bit of effort on the pastor's part to get people quiet and back to their seats. Even though this delayed the service a minute or two each time, we thought it was lovely that the congregation was so enjoying being together.

The Sacrament of the Lord's Supper was served and the bulletin had a helpful list of questions to prepare for it. Though most of the questions I could answer in the affirmative ("Am I a baptized child of God?"), there was also this question: "Do I believe that Jesus' Body and Blood are really present in the bread and wine?" There is a subtle distinction between the Catholic doctrine of transubstantiation and Lutheran teaching on the matter (consubstantiation), but not a large enough distinction to allow me to feel comfortable partaking. The congregation filed forward to receive communion at the front, and after all who could come forward had partaken, the pastor brought the bread and the cup to a few who were unable to come to the front.
Evangelicals and fundamentalists often assume all mainline denominations have a rather namby-pamby approach to the Gospel, shying away from the more difficult issues. That certainly wasn't the case in this service, which focused on the theme of our eternal destiny as the opening of a ten part series entitled "Believe." The hymn "The Day is Surely Drawing Near" features such lyrics as 'Then fright shall banish idle mirth, And flames on flames shall ravage earth" and "With shame and trembling they will stand, And at the judge's stern command, To Satan be delivered."

The sermon was a clear presentation of the options of heaven and hell and the need to put faith in the forgiveness found in Jesus Christ for salvation. There was certainly a spirit of compassion in the pastor's call to reach out others with the good news of the Gospel. 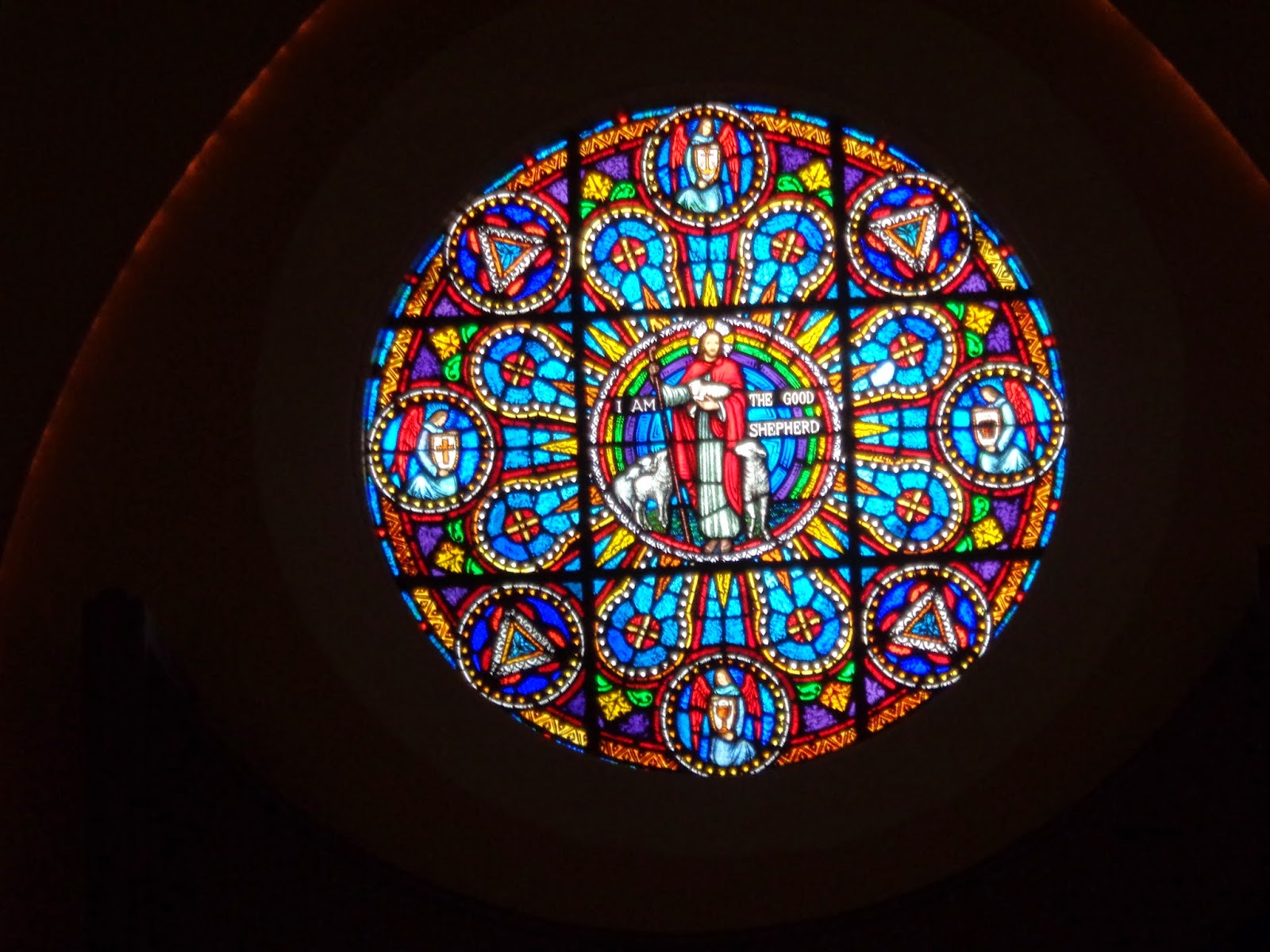 After the service, we very much enjoyed talking with Pastor Fred (a retired pastor originally from Wisconsin "don'cha know"). He told a little about St. Luke's 125-year history. The stained glass window in the front of the sanctuary was donated by the family of a retired pastor, but the stained glass window in the back of the church was donated by a Jewish family who had lived across the street and apparently wanted a beautiful view (which they certainly received, though this picture doesn't do it justice). 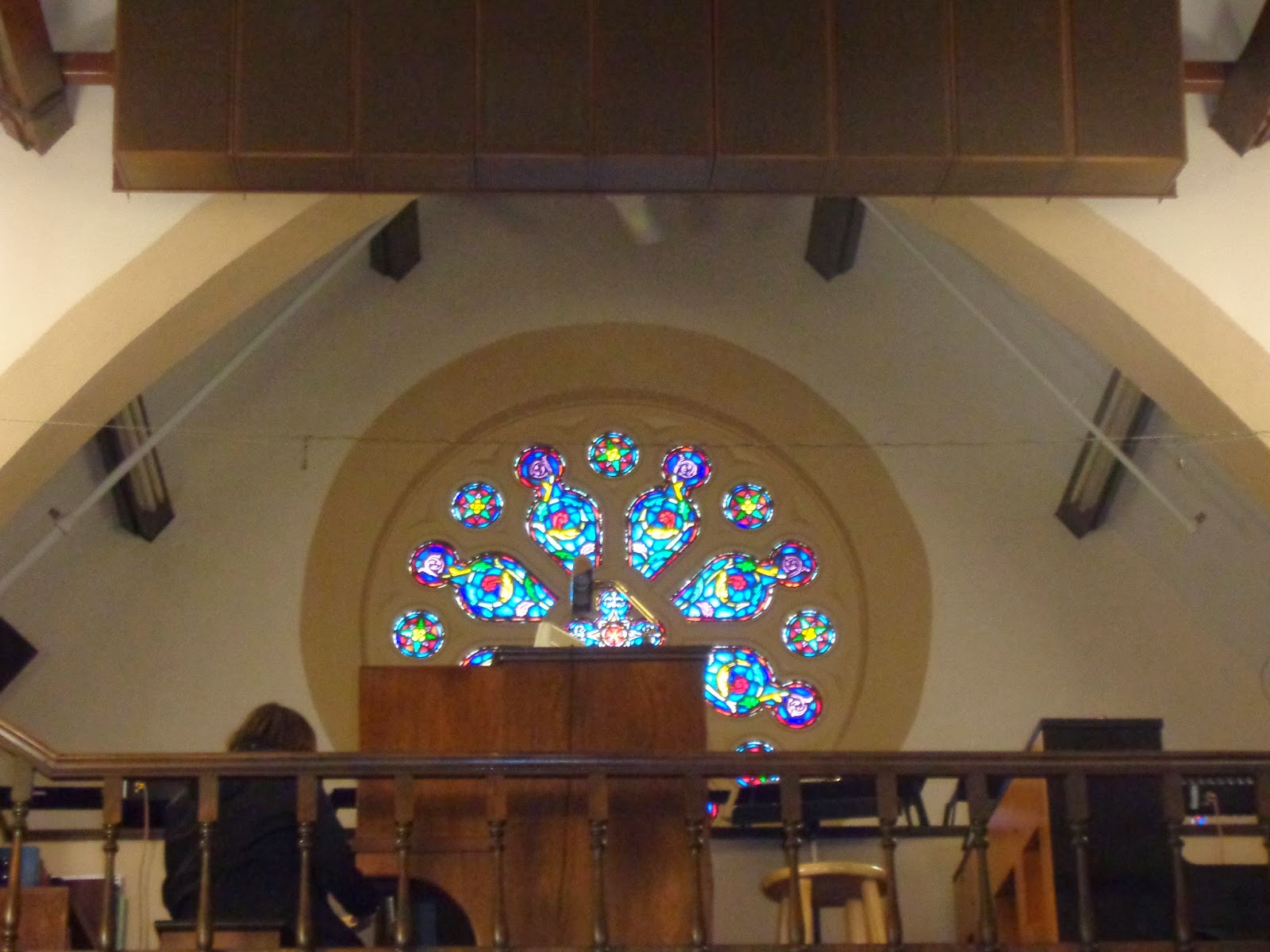