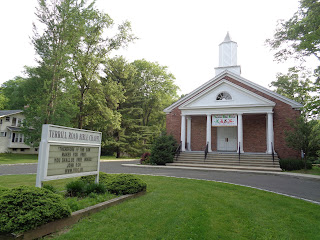 Back in 2016, we needed help to find a church to visit in New Jersey. Thanks to friends of missionary friends, we found ourselves visiting this church and getting to know some of the very welcoming people who are part of the assembly of Terrill Road Bible Chapel.

We had no idea how far-reaching that visit would turn out to be. Our hosts introduced us to their family, their church fellowship, the Jersey Shore, (and our favorite sermon illustration), and CCML.  Over the next couple of days, we'll be sharing a few other results of our stay in New Jersey.

Terrill Road Bible Chapel
A few weeks ago, I asked a woman in a bar what would make for a good church. She replied, "No priest, no minister, no pastor!" Well good news, Jeanie of Delaware, I've got a church for you! 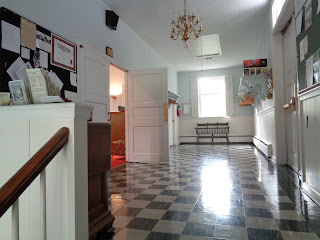 Terrill Road Bible Chapel was built in Fanwood, New Jersey in 1957, but the Brethren Assembly that worships there has more than a century's worth of roots in the area. The assembly (the preferred term for what we grew up calling the "church" or the "congregation") is associated with the Plymouth Brethren, but Brethren don't seem big on formal ecclesiastical ties of any kind.

We attended the Wednesday night Bible study, where the group is working their way through the book of Hebrews. After a bit of a spirited discussion about whether Hebrews 6:4-6 taught that believers could "lose their salvation," Steve, the study leader, approached the issue with a clear stance of "eternal security." A couple of people respectfully challenged his position, and I was impressed by the biblical knowledge of many in the group of 20. 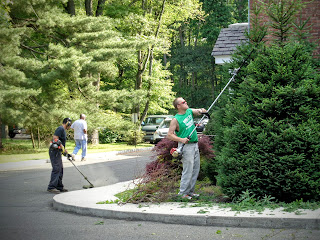 Also in that same meeting, there was sheet of paper filled with prayer requests. One side was chiefly requests by members of the Assembly, while the other was missionary and ministry requests. After about fifteen minutes of sharing prayer request information, the group spent another fifteen minutes to pray for those requests. (During the Thursday morning men's prayer meeting, we also prayed through that list.) 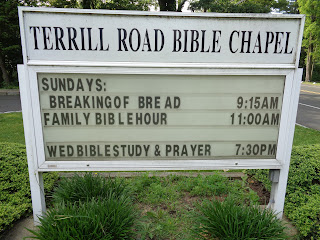 We were happy to be allowed to join in on the Saturday morning Chapel work day. Thirty people, about a third of the Assembly, showed up to work on the house and grounds. Mindy wiped down kitchen counters while I got to work on the street sign. Officially, the start time was 8:00 am, but some of the window washers arrived closer to 6:00 am. Before noon, everything was in good shape for the afternoon "Ping Pong por Pequenos." 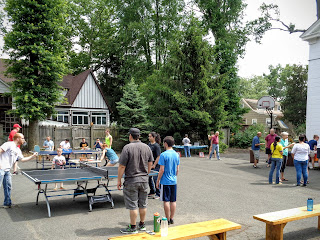 For the past five years, the table tennis tourney has been an annual event, raising money to send Ecuadorean kids to a summer camp. Anyone can compete as a self-proclaimed professional or Forrest Gump (which, from what I remember of the film, should be the pro level, but never mind). Neither Mindy nor I wond the championship belt, but the event raised more than two thousand dollars, so we're okay with that. (If you would like to help Ecuadorean or low-income New Jersey kids with the cost of camp, contact the good folks at the Chapel.) 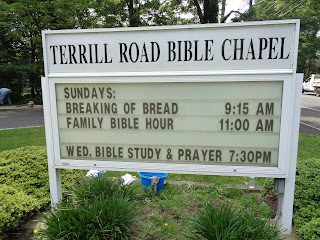 You may have noticed on the church sign that the names of the worship services are different than at many other churches. The 9:15 am worship is called "The Breaking of the Bread," while the 11:00 am is called "Family Bible Hour." Every week, the first service is a celebration of the Lord's Supper. It is a time of songs and scripture readings, the bread and the cup...but no sermon. Men in the assembly suggest hymns, which are sung without instrumental accompaniment. Other men stand and read Scripture, briefly commenting on it. There are many stretches of silence between the hymns and readings. After about 45 minutes, the bread and cups of juice and wine are passed among the seated assembly, and the service is concluded with a hymn, prayer, and announcements. Some people leave after this service, but many go downstairs for coffee and refreshments. 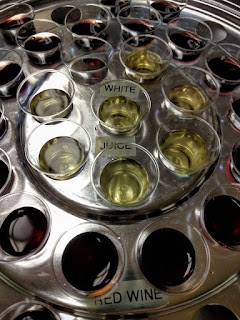 The Family Bible Hour is when the sermon is preached. First there are hymns and songs with instrumental accompaniment, then announcements again, then the sermon. This morning an itinerant preacher, Ken, concluded a two week sermon series, "Discerning the Will of God." 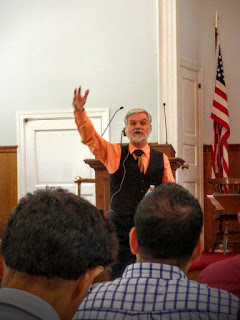 Not on the sign (but on the calendar on the website) is a third service, "Second Session." Most, but not all, Sundays the assembly goes to the fellowship room in the basement for sack lunches. After a brief lunchtime, the morning preacher continues his teaching, either with more preaching or with a question and answer time. 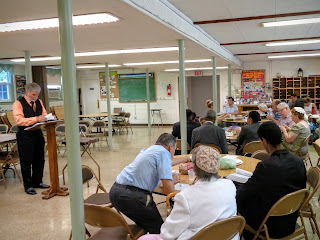 During the snack time after the breaking of bread, I was able to talk to people about what they appreciated about TRBC. Ben is a homeschool student between his junior and senior years of high school. I asked what he liked about the church, and he said he likes the variety of preaching. Since there is no pastoral staff, there's a rotation of preachers,  usually one of the elders in the assembly. There is no paid staff in most Brethren churches, and only men preach. The Brethren try to replicate New Testament worship, including Paul's instruction in 1 Corinthians 14:34 that women should remain silent in church. 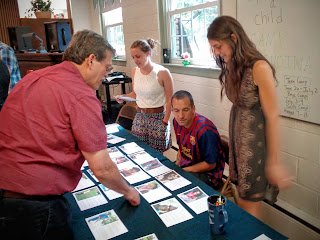 Ben could have attended the high school Sunday school class, but though he likes the people who teach the class, he prefers to hear the adult teaching. Something else he likes about TRBC? Lots of food.

I also spoke with Ken Barrett, the morning's speaker, before the Family Bible Hour. During the week, he works fulltime as a high school history teacher, while on the weekends, he preaches at various churches.  I asked what he appreciated about Brethren Assemblies in general. He said one of the best things about the Brethren is, "they're not trendy." Brethren churches are consistent. 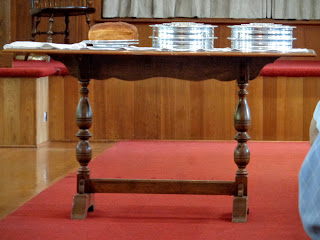 Two things, he said, have always been values in Brethren assemblies that are hot trends in other churches. One would be a high regard of for the Lord's Supper. In this regard, the Brethren are similar to Roman Catholics in the central place Communion plays in the life of the Church. The other value is the priesthood of all believers. In this way, the Brethren are quite different from Roman Catholics. Individual assemblies have no denominational authority over them, and a board of elders rather than a paid clergyperson leads the group.

Ken said this assembly does well at following tradition without letting it become rote and lifeless. 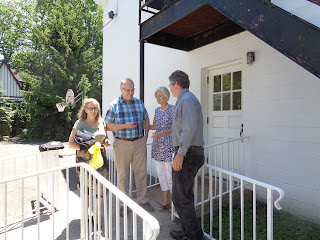 I should mention how we came to TRBC, especially since it was a topic of conversation throughout our time together. Friends we stayed with in Florida contacted friends who suggested the church and their friends who worship there. We contacted the church, their friends contacted us...so strangers welcomed us into their home and into their church. You might wonder what prompts people to that kind of hospitality. 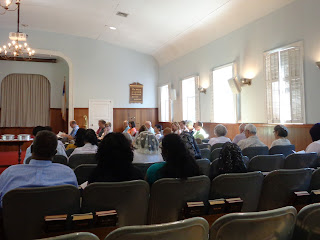 Well, our host, Allan Wilks, decided in 2013 to walk from Scotch Plains, NJ, to his former home town of Toronto, Canada. Along the way, a number of people welcomed him into their home and he wanted to imitate that hospitality. The Wilkses also remember Hebrews 13:2 "Do not forget to show hospitality to strangers." In fact, the whole assembly of TRBC values the Word of God and visibly seeks to honor and obey it. 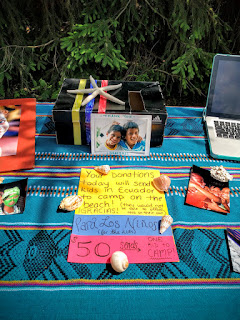 Family Bible Hour
Service Length: 58 minutes
Sermon Length: 38 minutes
Visitor Treatment: Dean was asked to share briefly about what we're doing this year. A number of people talked to us during the lunch time.
Followup by Tuesday Morning: none
Our Rough Count: 63
Probable Ushers' Count: 75
Snacks: people brought sack lunches and food to share (either with the table where they were eating or on a table meant for all). Coffee, tea, hot chocolate and water were available as well.
Musicians: acoustic guitar (man), bongos (man)
Songs: "Immortal, Invisible, God Only Wise"

"My Savior and my God"
Posted by churchandstates at 4:32 PM
Email ThisBlogThis!Share to TwitterShare to FacebookShare to Pinterest
Labels: 2016, Cheers and Amen, New Jersey, podcast