Cheers and Amen, the book about our adventures visiting a bar and a church in every state during 2016, was officially released July 4. Since we're also in the midst of unpacking, we're reposting stories about people who we can't forget, even though we couldn't include them in the book. We're feeling pretty independent right now, so we're remembering this bar today.

Liberty Tavern, Clinton, Massachusetts
Mindy asked the boy in Liberty Tavern about the game he was playing. The four year old told her, “Don’t listen. They say bad words.” He went back to his concentrated effort to race his car through the big city streets. 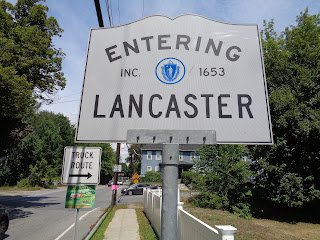 We were not in the big city. We had been to Boston a few days before, where we went to the Cheers bar (we’ll write about that soon) but that was more like visiting an amusement park attraction than a bar. So our bar visit was in a reluctant Boston suburb. 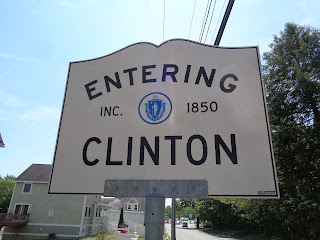 Sometimes it’s best not to investigate local legends. We heard talk from a few folks that Clinton, Massachusetts, had more bars per capita than anywhere else in the United States. (One person in the bar said it had been in the Guinness Book of World Records) Mindy investigated though, and found it currently barely cracks the top hundred in Massachusetts. We still went to Clinton because the town where we’re were staying, neighboring Lancaster, MA, is dry. 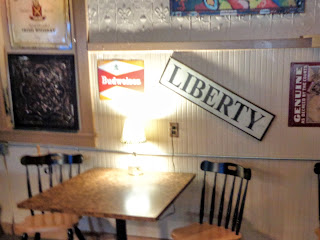 Being in the state that is the Birthplace of the American Revolution, we, of course, went with the Liberty Tavern in Clinton. (Though, frankly, I was tempted by Scooby Doo’s, another bar and pool hall in Clinton. I’ve been a fan of that mystery solving mutt since the first Saturday morning he appeared.) 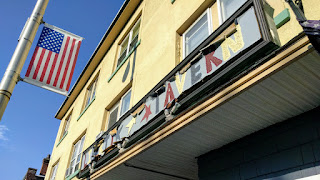 The lettering of the outside sign is deceptively weathered. I would have assumed, looking at it, that Paul Revere and Sam Adams hoisted cold ones here back in the day, but the place has only been called “Liberty” since 2007, though the location has been a bar for many years under a variety of other names. The current owners have just had the place since 2013. 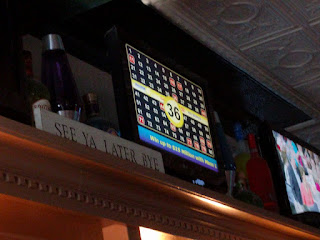 The bar was fairly full when we came in late on a Friday afternoon.  The walls were decorated with a mix of purchased and hand painted signs and sayings. I always appreciate the sign, “All our guests bring happiness, some by coming and some by leaving.” Shortly after we arrived, someone else came in the door and a number of people shouted out the man’s name. Sadly, the name was not “Norm.” But it was quickly apparent that people here know each other. 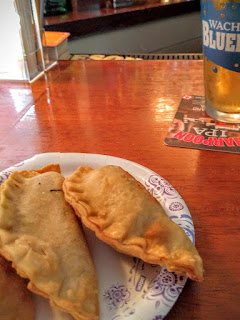 I noticed empanadas for sale on a counter beneath a warming lamp. I asked the bartender about them, and she told me they were made by a friend of hers who brought them in every Friday. I bought some along with Mindy's and my Angry Orchard ciders. The cider and the empanadas were very good, and minutes later I met the woman who had made the pastries.

Colleen was sitting at the bar. I introduced myself, not knowing she was the cook, but learned it soon. She told me she caters for a living, empanadas being one of many items she makes not just for this bar but also for local restaurants and catering events. She’s originally from Clinton, but has lived in a number of places through the years. She lived for a time in northern California, in Fortuna, for a bit and lived as a minor on her own in San Francisco. She’s lived for a time in Mexico. She is prone to wander, but for the last five years she has been back in Clinton. 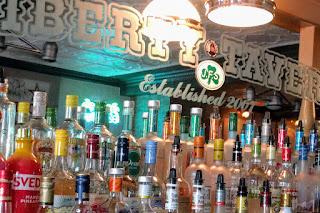 I asked her our two questions, “What makes for a good bar?” and “What makes for a good church?” She said that what matters is having a good bartender and the people. She’s a friend of the bartenders at Liberty Tavern, so obviously that’s a draw for her. As for people, she’s just there to watch. She prefers to sit alone and observe the personalities and drama. I asked her who she likes to watch most, and she said the little boy that Mindy talked to earlier. It turns out he’s the son of one of the owners and a beloved mascot in the place. Many guests greeted the child when they came and left. 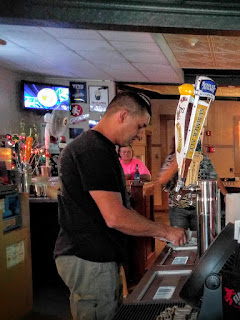 I asked Colleen what would make for a good church. She said she believes and prays everyday, but “churches are the number one place for finding hypocrites.”  We talked about this for a bit. I agreed with her that hypocrisy in the church was an issue, but I told her about some of the churches we’d seen on our trip that reach out to the homeless and hurting. She said that Clinton didn’t have much to offer for homeless people, that it didn’t have a shelter for battered women and it didn’t have much for kids. (Though I did notice, walking through town, First Concern, a pregnancy resource center.) 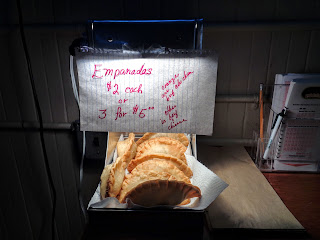 I had an opportunity to talk to Megan, an owner of the bar who’s perhaps even better known in this place as the little boy’s mother.  Megan is also owns a restaurant in town, Wrong Way Cafe, and she said her son moves back and forth between the places because she has the worthy desire to keep him with her. She talked about how he is a good, smart kid, and it’s quite obvious that many of the bar patrons agree with that assessment.

I asked her what makes for a good bar, and she said that a bar depends on regulars and that it’s important to keep those people happy. If a regular mentions that there is a beer or liquor that they want, she’ll get it in stock. She works to make sure that her staff wants to make people happy. 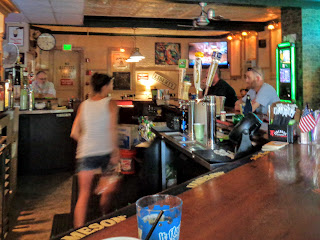 I asked her what would make for a good church. She said a friend of hers that lived to the north was a part of a non-denominational congregation that did a great job of focusing on kids, and kids enjoy it. She said that even though it taught about “God and stuff,” they incorporate “real life situations.” But she doesn’t go to church now. “I was a good church girl for a little while,” she said, and when she wanted her son to be baptized she was told that she needed to attend the church for three months. So she did. And she didn’t mind. But she quit after the baptism.

Meanwhile, Mindy was talking to a couple of men at the other end of the bar. Tommy told her that a good bar had “friendly people” and “good service” because the people were what make for a good bar. 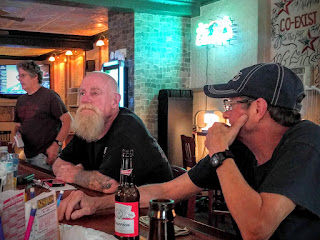 His neighbor, Ray, said the service makes a good bar. At Liberty Tavern, he told Mindy, “you walked into a neighborhood bar. There’s good people here. It’s friendly. That’s the type of bar this is.”

Tommy grew up going to church, as did Ray, though neither attend much now. Tommy said that a good church had a speaker who could “relate to common people without talking over their heads.” The message should “relate to their life.”

Ray said that he didn’t really have any idea about what makes for a good church. “Only reason I’ve been to church is weddings or funerals. Weddings are happy, funerals are sad.” Both agreed that we wouldn’t see a prettier church than St. John’s in Clinton, and told us we should go inside if possible. 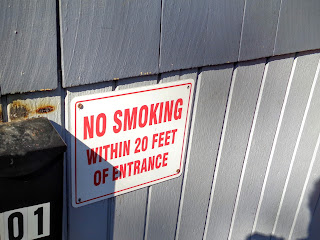 One of the bartenders, Steve, headed out to smoke, and Mindy followed him to continue the conversation they’d started at the bar. He said he’d worked there under three owners, since the bar was called Dave’s Place. He said a good bar needed “great morale for everybody, that treats everybody equal. That’s pretty much what I think a great bar is.” He added, “For me, a positive vibe. Sort of like at church: we all greet each other even if you don’t know each other. For a bar to work, everybody has to accept each other. You set all those things from the outside world aside, and know you’re accepted.”

He knew the church question was coming, and he said it’s the same thing. “No different. People go because they know they won’t be ridiculed.” 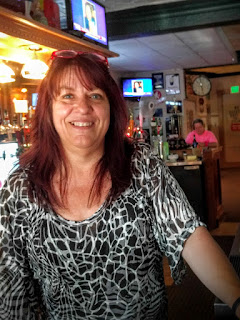 Another bartender, Tee, agreed. “Both have the same answer: good people at both ends. Staff, customers.”

I found it interesting that everyone in the bar seemed to know the laws for minors in bars: kids can’t be in a bar after 9:00 pm, and they can’t be at the bar themselves. They also know what soda the boy likes and where in the bar his toys are kept.
One of the current candidates for president used to say “it takes a village” to raise a child. I guess sometimes it takes a bar.
Posted by churchandstates at 7:29 AM
Email ThisBlogThis!Share to TwitterShare to FacebookShare to Pinterest
Labels: 2016, bars, Massachusetts