Cheers and Amen, the book about our adventures visiting a bar and a church in every state during 2016, will have its official launch on July 4. In preparation, we're reposting stories about people we can't forget, even though we couldn't include them in the book. 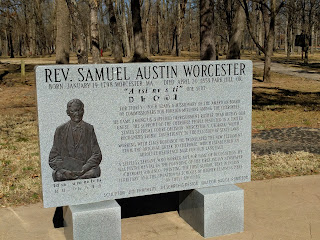 I found a new hero Saturday while touring the Cherokee Heritage Center in Tahlequah, OK. Samuel Austin Worcester was missionary to the Cherokee in the 1800's, but Georgiahad a law that forbade missionaries from living with Native Americans without a license. He flouted the law, and he went to jail for over a year. His case went to the Supreme Court, and he won. He was a great advocate for Cherokee sovereignty, translated the New Testament to Cherokee, and helped found the first Native American newspaper. I also learned about the missionaries that accompanied Native Americans on the Trail of Tears. This helped me understand why the Cherokee people turned to Christianity in spite of the despicable treatment they received from the American government (#GetJackonOffTheTwenty). 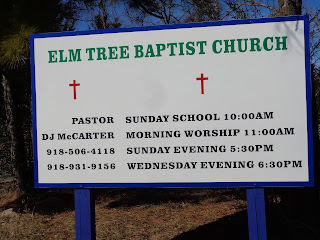 We decided to go to Sunday School before the service and were glad we did. At the church on fifth Sundays, all the classes meet together for special programs. Darrel, the man in charge of the morning's activities, introduced himself. We mentioned that we'd decided to come here since we heard Indian Churches were a thing here. He pointed out that there was a mix of Indians and non-Indians in the congregation. (It is impossible, of course, to guess by appearance such things since there are a number of blond, blue eyed Cherokee.)

The opening reminded me of Sunday School programs when I was a kid. There was the chance to share birthdays and anniversary, and then there was the "Penny Parade" when people could march to the front and put change in the church building bank (which I could not resist). 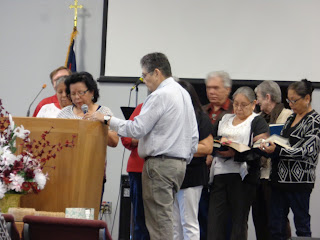 Each class presented songs and/or memory verses. This was a guarantee of some little kid cuteness. After presentations from the children and youth, the adult Sunday School classes gave presentations; two general adult classes, a women's class and a Cherokee class. The Cherokee class presented verses in Cherokee and English and sang a song in Cherokee. Three men also sang a hymn in Choctaw (another language from another tribe). Some people shared testimonies. One woman told about her husband's recent stay in the hospital and the encouragement she received from people in the church in the form of calls, visits, cards and especially groceries. 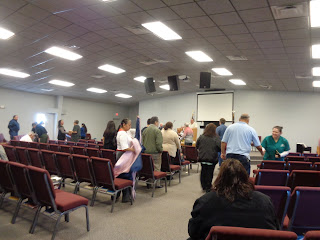 At the end of the program, a woman came to the front of the room to give the director the results of the attendance count and Bible count which was shared with the group. The program ran a little long, so we moved straight into the worship service which began a couple of minutes late.

Pastor D. J. McCarter welcomed a Councilman and his family who were visiting. He then welcomed a couple from California (That's us!) and invited us to introduce ourselves. Then the pastor introduced a group of students from the Baptist Collegiate Ministry of the local school, Northeastern State University, who were brought forward to lead the service. 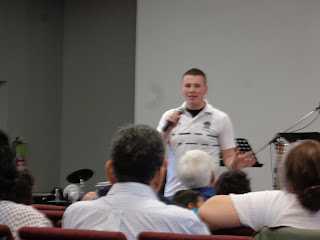 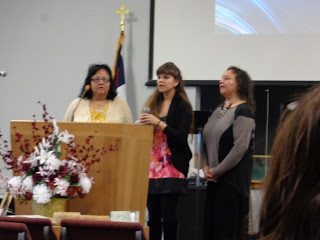 But it was great fun to learn that one of young woman in the group is the current Miss Cherokee, a goodwill ambassador for the Cherokee Nation. She sang a Cherokee hymn accompanied by her mother and aunt. She also shared about her experiences in a recent mission trip to Haiti. Other members of the group also shared about the trip, which was sponsored in part by Elm Tree Baptist.

The leader of the BCM group then spoke. He said just as many who shared about their trip to Haiti spoke of "leaving their comfort zone," he was doing the same as "a white boy speaking to an Indian church."  After the short sermon (that had been preceded by three missions testimonies), Pastor McCarter presented an altar call asking people to come forward to receive Christ or come forward for prayer. The prayer requests of those who came forward were then shared with the congregation. As the pastor was concluding the service, more prayer requests and announcements were called out from the congregation. 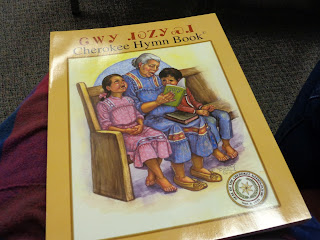 After the service I talked with some of the junior and senior high students who were sitting near us. I asked what an average service was like, and they said there was usually a singing time (with at least a couple of songs from the Cherokee Hymn Book), and then Pastor McCarter would preach. I asked about the pastor's preaching and one of the young men said, "I like his preaching because I can understand it. When I listen to some other preachers, I don't always get anything out of it, but I do with D. J." I shared this with Pastor McCarter and he said he was simple man with a simple message. 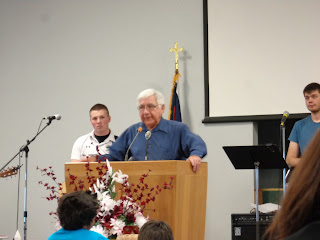 Pastor McCarter told me Elm Street was his third ministry, and he's been serving there for the last 26 years. He came to Christ back in 1972 when he was playing guitar in rock and country bands and drinking too much. But God changed his heart, and he now says that there is nothing he likes better than preaching the Gospel.

Pastor McCarter also teaches the Cherokee language in spoken and written forms, and he leads a Cherokee choir with members from a variety of churches. That choir travels and has performed at the Smithsonian twice. 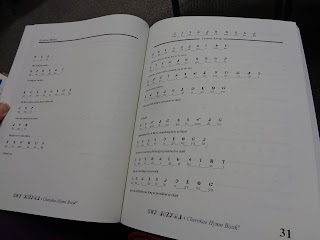 Members of the congregation were quite welcoming and one gentleman assured us that we had already seen the best of the country by coming to Cherokee County. Our journalistic objectivity keeps us from calling anyplace the best, but we are thankful God led us to Tahlequah, the capital of the Cherokee Nation.