Revisiting 2016: The Shelter in Tucson

Now that we've finished visiting new churches and bars every week, we're taking a look back at where we've been. This was the second bar we visited and was originally posted on January 9, 2016. 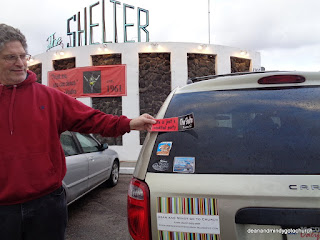 The Shelter, Tucson, Arizona
Let's deal with the sad news first. I was told there would be pinball. When USA Today recommended this place, they said there was pinball. Yelp reviews mentioned pinball. But there were no pinball machines in the bar.

I asked Stephen, a patron who's been coming to the place for over a decade, about the pinball machines. He assured me the bar had, in the past had the machines, "The old kind where the number turned over, not electronic scorekeeping," but we didn't see any. 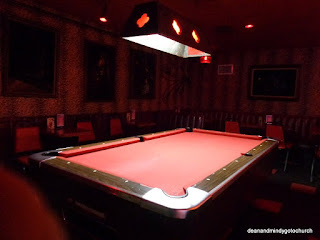 You could play pool, though, and there were some video games. More importantly, the kitsch was there. The bar takes a 1960s theme and runs with it. We noticed many pictures of Kennedy and a lava lamp behind the bar. Sadly, no one was wearing go-go boots. 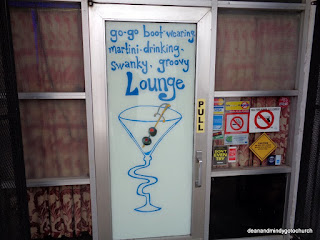 The bar has been around as long as Mindy and I have -- it was built in 1961. A legend goes around that it actually was a fallout shelter, but no. It has always been a bar. 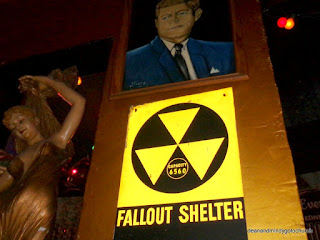 Inside and out, it has a bizarre round structure. When we came in during happy hour on Friday afternoon, Led Zeppelin's "The Song Remains the Same" was playing loudly. Though I'd read that the place uses DJs on occasion, it was pretty early in the afternoon, and the bartender seemed to be the DJ. 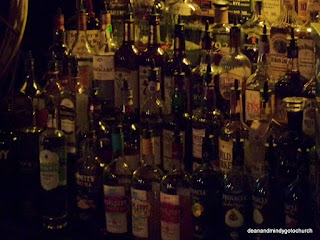 The place was dark, so there was effort involved in reading the menu (glasses on? glasses off?), but some of the velvet paintings got enough light to glow a bit. One portrait of JFK had a toothy smile that actually lit up. Little naked lady statues are also scattered about the place along with posters celebrating bands and B movies of the past. 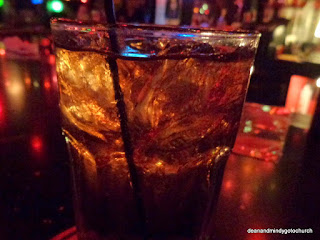 After ordering our drinks (I had one of this month's specials, a Sailor Jerry with Coke. Mindy had Julie's -- maybe Judy's -- Coffee. The bar was pretty dark -- Coffee), we moved down the bar so we could chat with other customers. 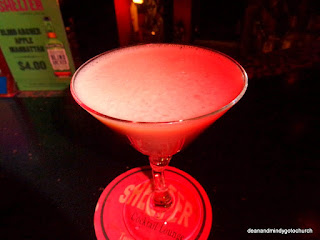 We asked a couple of high school English teachers, Stephen and Tawnee, our first standard question, "What makes for a good bar?" Stephen said he liked the dark atmosphere of the place and that the staff was awesome. The bartenders were personable, and he felt they were obviously treated well by the management because they stuck around for a long time. (Paris, who was tending bar that day, has been at The Shelter for sixteen years.) Stephen said the drinks weren't all that good, but he liked the music they played. 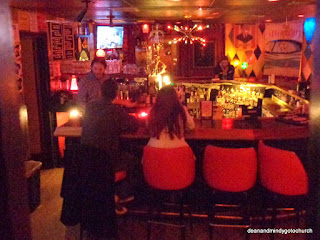 When I asked what would make for a good church, Stephen described a local spot of natural beauty which was as close as he'd come to church, but he said Tawnee, who hadn't said anything so far, would have an answer for that question. We asked if she was a churchgoer and she said, "Yes."

Initially, her answer to the question was one word, "Depth." She said that until recently her church had a pastor with great knowledge; he had a doctorate, and his sermons were a real education. She thought her parents were bored on occasion, but she really appreciated the teaching. But, she said, the church leadership had fired him, and she missed him. She didn't always agree with what he said, but she always left feeling she'd learned something. 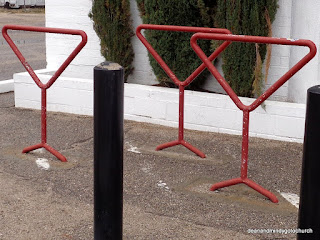 We turned to Paris the bartender, who was getting busier as happy hour progressed. As he prepared drinks, we asked our questions. He said qualities that made for a good bar were good service, good drinks, and a clean environment. We asked the church question, but he wouldn't answer it. He said talking about things like that made customers uncomfortable.

Paris did seem concerned about his customers. He greeted several customers by name as they came in (a bit of a Cheers touch there), and earlier, before the bar got busy, hugged a customer who seemed a little down. 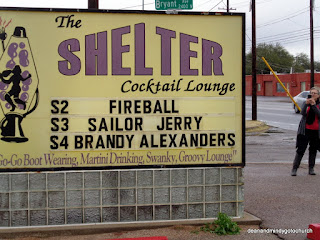 As we were leaving customers were flowing in. This monument to the past still seems to have a future.
Posted by churchandstates at 10:40 AM
Email ThisBlogThis!Share to TwitterShare to FacebookShare to Pinterest
Labels: 2016, Arizona, bar