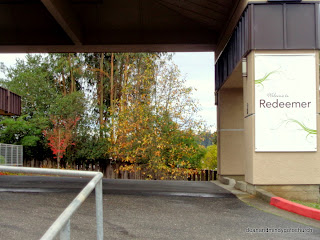 Since we finished our church-and-bar adventure at the end of 2018, we're reposting posts you might have missed from the beginning of our travels. This post originally appeared December 2, 2014

Redeemer, Santa Rosa, California
It’s not uncommon these days for churches to downplay -- I’d go as far to say hide -- their denominational affiliation. Especially here in the greatly unchurched northwestern part of the United States, a denominational tag seems like more of a burden than a blessing for some churches. People around here often seem to be just trying to get a handle on the definition of what it means to be a “Christian." 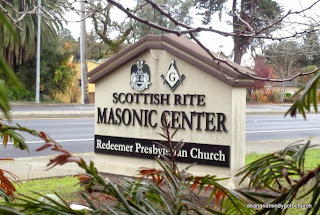 Nonetheless, when Mindy googled Redeemer Presbyterian Santa Rosa and found the church's website she was rather surprised that the word “Presbyterian” was as scarce as Waldo at the site. We wondered whether this was one of those churches seeking the comfort of the generic.

It didn’t take long in our visit to discover that wasn’t the case.

First of all, their sign out front does say “Redeemer Presbyterian Church” right under the sign for “Scottish Rite Center.” (The two organizations share a building, which makes some historic sense as the Presbyterian Church roots are in the Scotland of a little over three centuries ago. Apparently, the first Scottish Rite Lodge was founded in a bar in London a little less than three centuries ago, but let's not argue about history and geography when we've found an interesting circumstantial connection.)

And it wasn’t long into the sermon on First Peter 1: 13 - 16 (“Be holy, because I am holy”) that there were several references to how “we” (the congregation) respond to things as Presbyterians. I was glad to hear the familiar joking about how though Presbyterians do things “decently and in order” there was room to be excited about God. Presbyterians like to chuckle quietly about such things.
There were also references in the sermon to “Reformed Theology,” and after the service, I talked to three different people who mentioned how they appreciate the teaching about Reformed Theology in the church. As a seminary grad I’m always happy to discuss theology, but it’s not something most people mention by name. So it’s fun when it happens. (It’s kind of like when a Dr. Who fan happens to run into another fan off-line. “I can’t believe you want to talk about Gallifrey!”)*

I can’t think of one time in my life when I’ve visited a Baptist church and heard someone say, “I appreciate how Dispensational Theology is taught in the church.” Nor have I been at an Assembly of God church and heard anyone say, “I sure do love the Pentecostal Theology proclaimed around here.” I think interest in theology says something good about the depth of teaching in the church.

We have visited other churches over the last year that exclusively sang hymns, but this was the first such church we’ve visited with people younger than us in the congregation. (Not just younger than us, but actual young people, teens and such, singing enthusiastically.)

If we had come one week later, we would have been present for the 20th anniversary of the church. We do hope (if the Lord tarries), this good church will have many more decade celebrations. 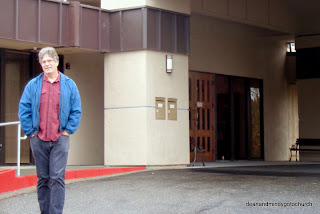 Statistics
Service length: 1 hour 10 minutes
Sermon length: 40 minutes
Visitor greeting: We were greeted warmly by many people. Some of those greeting us were old friends, but we were greeted by strangers as well. No particular attention was given to visitors in the service itself.
Our rough count: 75
Probable usher's count: 100
Snacks: We were told coffee and cookies were served in the refreshment area, but we were having too good a time talking to folks in the auditorium worship area, so we never made it there.

Songs:**
“We Come O Christ to You”
“O for a Thousand Tongues”
“There is a Fountain Filled with Blood”
“O Church Arise”

**You might note that no Christmas carols were sung. There were announcements for upcoming Christmas events, but they did not acknowledge the first Sunday of Advent. Fortunately, we live in a world with Youtube, and I could still hear my favorites. A friend who attends Redeemer said that usually more contemporary songs are sung, but the musicians available that particular morning were more comfortable with hymns. That's the peril of these one-visit reviews, but I believe there's value in snapshots.

Posted by churchandstates at 9:52 AM
Email ThisBlogThis!Share to TwitterShare to FacebookShare to Pinterest
Labels: 2014, Presbyterian, Santa Rosa