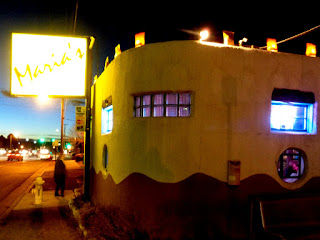 In 2016, we embarked on a quest to visit a bar and a church in every state during that calendar year. In mid-January, we found ourselves in Santa Fe, and Mindy wanted to try authentic New Mexico sopaipillas (which she'd first eaten during college, at a Mexican restaurant in Muncie, Indiana). This seemed the perfect opportunity -- though we knew we needed to focus on the bar.

Maria's New Mexican Kitchen, Santa Fe
Some of the promotional material for Maria's New Mexican Kitchen in Santa Fe claim they wrote the book on margaritas. Since Jimmy Buffett wrote Tales from Margaritaville, I'd think he'd written "the" book on margaritas, but Maria's is talking about The Great Margarita Book: A Handbook of Recipes written by Al Lucero, former co-owner of Maria's (with a forward by Robert Redford),  so the bar certainly has expertise in the field. 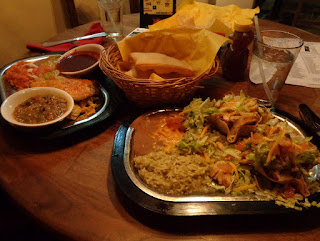 To be ready to try the margaritas at Maria's bar, we ate dinner in the restaurant first. This blog isn't about food, so this is not the place to say that the Santa Fe cuisine was delicious, and my chalupas were very good but I was still jealous of Mindy's blue corn tortilla enchilada, but neither entree could compare to the sumptuous little pillow sopaipillas. No time for that, we're moving on to the bar. 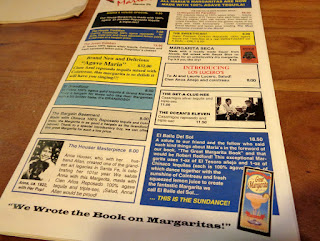 The bar had only about eight seats, with two single stools unoccupied. Before we could make a request, the bartender kindly asked a couple to move down so we would have seats together. Also without out our asking, he set two glasses of water in front of us (which were appreciated), along with drink menus.

Over one hundred different margaritas are listed, so we felt rather like the proverbial person from the developing world encountering an American supermarket for the first time: abundant option paralysis ensued. 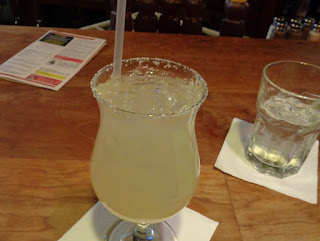 Mindy eventually went with the Margarita Seca because it was described as being very dry (she thought she might like a dry margarita more than a sweet one), but after considering several other interesting options, I went with the Grand Gold because I've seen too many economic infomercials. 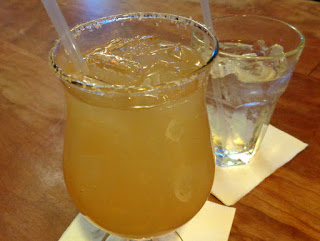 The woman sitting next to us was obviously something of a regular. (I say this because someone on the staff came to greet her, not at all because she looked like someone who hung out at the bar.)

We introduced ourselves and found that Deanna does often frequent Maria's, but she usually comes with her husband, who was currently out of town on a business trip. She said she wouldn't usually seit alone at a bar (that's not what nice Southern girls like herself were raised to do), but she did know the staff at the restaurant, so she felt comfortable ordering dinner in the spot.

Deanna used to work as a hospice nurse, but now she works with indigents, street people, and other at-risk folks in Santa Fe, trying to provide them with health care. I asked her how big a problem alcohol and drugs were for her clients and, not surprisingly, she said both were a part of most if not all of her clients' lives, although as more of a root problem for most of them. Many street people use drugs, she said, to deal with their lives -- heroin to calm things down and meth to pep things up. She said she's come to respect her clients for carrying on with their incredibly difficult lives. 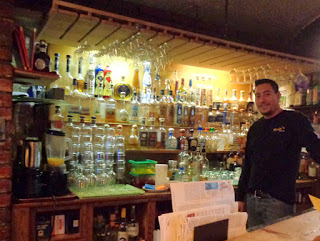 We asked Deanna our standard questions, "What makes for a good bar? What makes for a good church?" She said she and her husband were creatures of habit, which led to them to return to Maria's, a place they felt comfortable. Along with that, they have strong drinks at an economical price.

As for what made for a good church, Deanna modified our question to fit her Southern Baptist/Jewish background: "What makes for a good church or temple?" As an introvert, the answer for her was the smaller and more informal the better. She would look for a place where friendships would be built that helped everyone reach their full potential.

Deanna also told us not to worry about quoting her precisely. I think it was shortly after that she said something like, "You are the two most delightful people I've ever encountered and your blog sounds simply riveting."

It was time to ask our bartender, Misrahim, our questions. Not surprisingly, he noted the importance of the bartender, who he said should be someone who makes good drinks and is considerate of his customers. He said he didn't go to church, but he thought it was important that a priest not be boring and able to keep the congregation's attention. 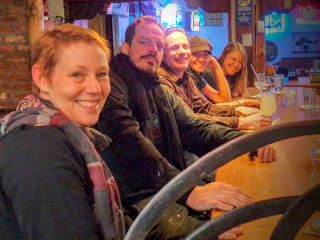 At the other side of the bar was a group of friends obviously enjoying each other's company. We decided to crash their party and even we, the old people with the annoying questions, couldn't dampen their spirits. They happily responded to our questions.

We asked what makes a good bar, Ryan answered quickly and methodically listing four things that mattered to him, which he reordered as he spoke: 1) service 2) people 3) product and 4) price.

Danielle was looking for a place where friends could get together and relax. Jules looks for a place with great staff that could become friends. She looks for to build a community, a little family, a home away from home. Kara said that Maria's was one of her favorite bars, and it has "Cheers Syndrome" (a good thing).

Elizabeth summed up her answers to both our questions in two phrases: Bar - Loving Drink and Church - Loving Heart.

And a good church? Ryan said he'd loved church as a kid. Growing up in a Methodist church, he'd liked the singing and the music and remembers zero judgment from the people there. (He seemed to be the only one in the group with only pristine memories of the church.) Kara said she was looking for a sense of community and provision of support. Jules, a Catholic, remembered a priest at a church in her childhood who set an example she'll never forget. He was a humble man whose homilies were brief and moving. She said the worship service should be about Jesus, not the preacher. She said that she's had a hard time finding such a priest and church since then but she very much appreciated the last Christmas Eve service at the Basilica in Santa Fe. The Archbishop spoke, and he followed that example of humility.

Danielle said she hated church as a kid. She was kicked out of Sunday School when she was five years old, apparently for asking questions and expressing doubt. She's now an agnostic, but thinks a church should give room to ask questions about values and morals. For now, she looks to nature as her higher power. 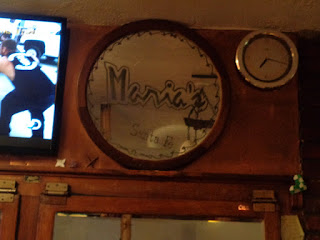 Something churches and bars seem to have in common: both on occasion kick out five-year-olds. In the case of bars, that's a good thing.
Posted by churchandstates at 10:01 AM
Email ThisBlogThis!Share to TwitterShare to FacebookShare to Pinterest
Labels: 2016, bars, New Mexico