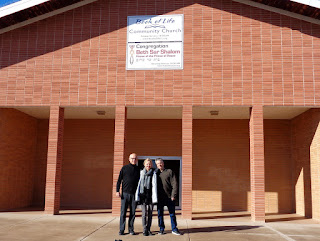 Beth Sar Shalom, Tucson, Arizona
First posted 1/12/2016
The course I took was nicknamed "Suicide Hebrew."  Hebrew was a requirement for the Master of Divinity degree, but you could take it as a six week summer class, and I did. Maybe the nickname of the course is what led me to use the song "Suicide is Painless" from M*A*S*H as learning tool for the Hebrew alphabet. So now I remember the first five letters of the alphabet, a few words, and little else. Therefore, I'm pretty sure what I was doing to the pronunciation of Hebrew during songs and chants at Beth Sar Shalomwas homicide. But everyone around me was most gracious and did not complain. 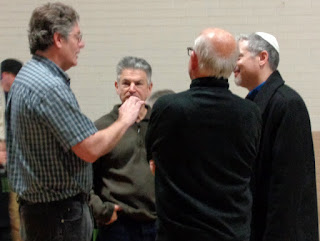 We came to visit the congregation because friends who used to attend church with us in Healdsburg, Chuck and Janet Setterland, are now members of Beth Sar Shalom. Janet particularly had wanted to understand Jesus and the Scriptures better by learning more about Jewish culture and Hebrew Scripture. One thing that interested Chuck initially was his respect for the nation of Israel and his desire to show support to the Jewish people. 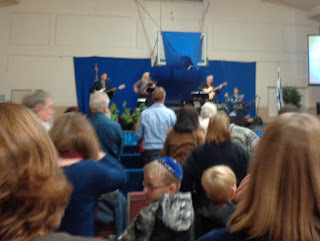 Since joining the church, they've been taking Torahstudy classes and celebrating some of the Jewish holidays. Last Friday night we celebrated a Sabbath (Shabbat) dinner. Their friend, Murray, a Jewish Christian friend originally from Brooklyn, printed up some traditional prayers for the occasion. The roast chicken, challah, and wine tasted all the better because of the blessing. (And we had chocolate babka for dessert which tasted all the better thanks to Seinfeld.)

Beth Sar Shalom describe themselves in their literature as "a mixed group of Jews and Gentiles who gather together to worship God and His Messiah --Yeshua (Jesus)." 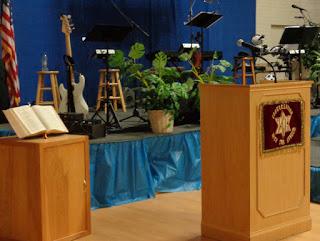 Many wonder whether someone can be a Jew and a Christian, but it's easier to reconcile since those who followed Jesus around were all Jewish, as was the Apostle Paul (who had quite a bit to do with the early Church). A big question that the Church wrestled with in the first century was whether someone could be a Gentile and a Christian. At Beth Sar Shalom, they believe that the Jews who trust in Jesus are still Jews. They believe Jesus is the answer to the prayer of their people for a Messiah. 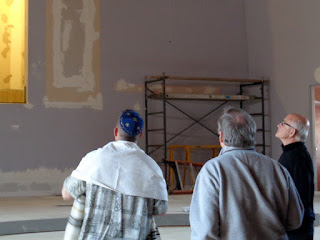 On Saturday morning the congregation met in the gymnasium since the sanctuary is being refurbished.  (In the summer the pews will be replaced with more practical and comfy chairs, and there are plans to add sound panels to the walls and a mural recreation of the Wailing Wall.) In the gym, the basket over the worship team was covered, but the basket on the other side of the room was not.

Most people greeted each other with the words, "Shabbat Shalom." Some men wore prayer shawls and yarmulkes, and a couple women wore head coverings, but most did not. Some traditional Synagogue liturgy was used in the service such as the Kaddish, the Amidah and the Shema. But we also sang modern choruses such as Chris Tomlin's How Great is Our God with Hebrew lyrics added to make it Gadol Elohai. 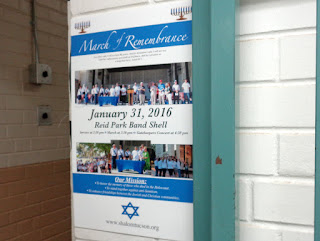 One of the main announcements was for the upcoming "March of Remembrance," a commemoration of the Holocaust. There was a hope that other Jewish organizations in the Tucsoncommunity would also be involved. The Congregational Leader, Steve Shermett welcomed those who were watching the service via the internet. ("Congregation Leader" is apparently the preferred title in the church over "Rabbi" or "Reverend.") He welcomed viewers from Canada, Texas, South Carolina, New Mexico, Nevada, Idaho, Colorado, California, and the twelve watching in Tucson. (He challenged the people in Tucson who were online to come to the service the next week. It reminded me of watching Miss Mary Ann on Romper Room as a kid when she looked through the magic mirror and greeted home viewers by name. She never seemed to get to Dean.)

Children were then dismissed to their Shabbat Class called Club Maccabee.

The scripture for the sermon was I Corinthians 2, but Steve began the sermon with the story of how he came to Christ. He was raised in a Jewish home, but his parents divorced when he was fairly young and his mother married a Gentile. Steve still prepared for his Bar Mitzvahbut before the ceremony took place, he realized he didn't know whether he really believed in God. He decided he couldn't go through with it. His grandfather tried to bribe him with a gold Krugerrand -- which only made him more opposed to completing the ceremony. 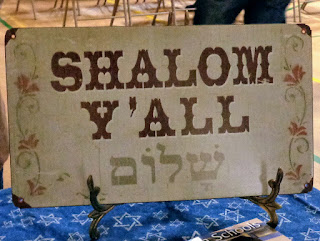 Steve was looking for meaning, so he asked his mom if they had a Bible. Though his mom was a big reader with an extensive library, she didn't know if they did. They found one on her bookshelves and literally blew the dust off it. It was a publication from a Jewish organization (and, of course, just had the "Old Testament"). As he read the Scriptures, he came to realize he did believe in God. He did wonder what to do about the commands of Scripture for sacrifice ("Was I supposed to kill my dog?").

Out of high school, he got a job working with Christian believers. They challenged him to reread the Torah with Jesus in mind, as the Messiah. And he found passage after passage (from the plural voice of creation to Jacob's wrestling with God) that seemed best explained by the Christian worldview. But he still couldn't receive Christ and go against what he had been taught throughout his life.

Around this time, he had a dream of hell that shook him up. He prayed to receive Christ -- and he didn't have to tell his co-workers he'd done so. They could tell he had changed "by the glow" on his face. He began to read the New Testament (along with the Old) voraciously. He began to go door to door to share the Gospel. He joined Jews for Jesus. He eventually went for training at the Moody Bible Institute in Chicago where he not only learned the Bible but also more about his Jewish religious heritage. He then came to Beth Sar Shalom where he has served for the last 25 years.

Steve says that God was faithful in showing Himself when Steve sought Him. He encouraged the congregation (and those viewing at home) to seek Him, for He would be faithful. 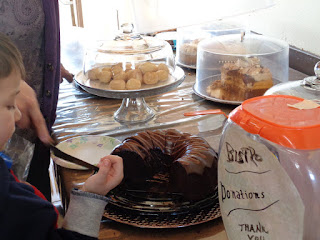 After the service, we had many opportunities to hear stories from the very friendly folks of the Beth Sar Shalom congregation. One of my favorites was from Janet, a woman who showed me some of the books and other items available in the Bistro, where coffee was also available after service. She was raised in a Jewish family, but not exactly an Orthodox one. Her mother would serve the family ham; Janet asked how she could do such a thing. Her mother told her it was "Kosher ham."

That term is nonsensical, of course. But some think the same of the  term "Jewish Christian." Nonetheless, Janet has lived as such a person for the last 23 years. Along with many other faithful believers she has proved that the phrase means very much.