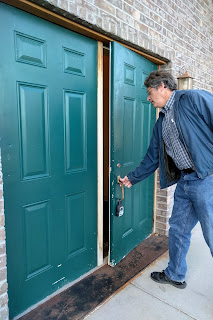 We want to recognize some of the wonderful people we met during 2016 whose stories didn't fit into Cheers and Amen, the book about our adventure of visiting a bar and a church in every state. We'll be sharing some of our favorite posts. Check the end of the post for a recent update from former strangers who allowed us to become their friends.

Jordan Presbyterian Church, West Jordan, Utah
originally posted 11/22/2016
"Please join me in the call to worship,” Brian, the pastor of worship, said as he opened the worship service at Jordan Presbyterian Church (since our visit the church name has changed to Jordan Valley Church), “We’ll read responsively. Please read along with the bold print.”

People struggled through the call to worship until Brian partly asked, partly stated, “There was no bold, was there?” He quickly recovered, and we all enthusiastically read the passage from Exodus 15 together. 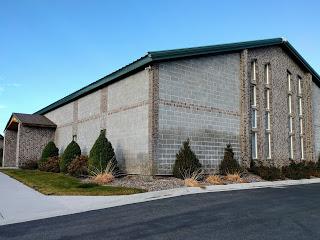 In these posts, I usually don’t like to talk about things that churches do wrong. We’re usually only there for one service, so it doesn’t seem right to focus on the mistakes. But here I am, starting right off with something that went wrong. The reason I’m starting there is because it was kind of the theme of the morning -- not that there were a lot of mistakes. The theme of the morning was transparency. 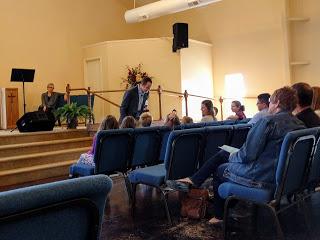 Pastor Jon called the kids to the front for a children’s message (listed as the “Youth Message” in the bulletin). He asked the kids if he could show them a picture of himself. He then held a picture frame (with glass) in front of his face. Some of the kids argued that it wasn’t a picture, but that didn’t stop them from wanting to hold the picture frame in front of their own faces. Jon asked if the kids knew what the word “transparent” meant, and a kid responded, “It means you can see through it.” (Obviously this kid studied his thesaurus more than I did as a kid. Jon said we need to let people see our whole lives, even our weaknesses, because then people can see how God helps us when we struggle. 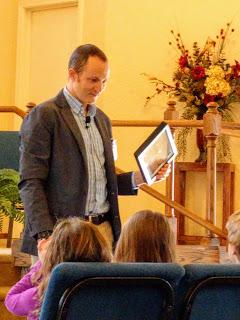 Transparency was also the theme for Jon’s sermon, with a text taken from 2 Cor. 1: 8 - 11. It was part of a series setting a vision for the church, “Our Journey to Know Christ.” In earlier weeks, he’d spoken on Landmarks for the Journey (Worship, Prayer, Sharing, Discipling); now he was working through unique supplies the church had for the journey. This week’s supply element was “transparency.”

He used the windows in his house as an illustration. He explained that he likes to have plenty of windows on his house, but that he and his family live across the street from a school under construction, so those windows had gotten very dirty. Fortunately, an enterprising youngster came to his door and offered to clean the windows for a dollar a piece ($.50 for screens). Soon the windows were clean, and the family could see out. But people can also see in. For the most part, that’s been okay. 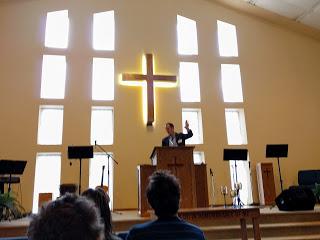 He talked about two mistakes we can make in regards to transparency. We can put up a false front and pretend that there is nothing wrong in our lives, or we can vomit all of our problems out on everyone. Neither of those options is Biblical or healthy. The Apostle Paul didn’t share every problem, but he did say how he felt and how God strengthened him. When we share what is going on in our lives, in our church, people should come away thinking about the goodness and power of God. (Later, he said, “We’re an awkward church. That’s a good thing.”) 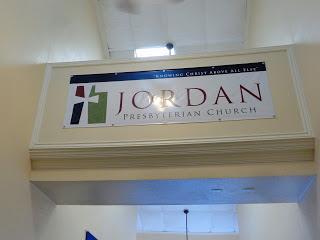 I thought the contrast he made next was quite interesting. “So much of religion here in Utah is kept in secret. But we want to be a church with big windows for people to see the power of God in weakness.”

The religion he was talking about, obviously, was The Church of Jesus Christ of Latter-day Saints (or Mormons or LDS). That faith is central to the culture of Utah. The state was founded by Mormons and the LDS Church (which might be commonly called “the Church” in the state) continues to have a great influence on laws and social mores. 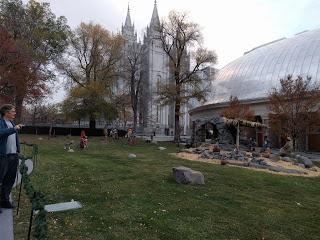 Earlier in the week, we visited the Mormon Temple in Salt Lake City. Or, more properly, we visited Temple Square, because non-Mormons (formerly called “Gentiles”) are not allowed inside the Temple, and there are no big windows so you can look inside. We were shown a model of the temple, though: the scale was somewhere between Barbie and Lego figure size. 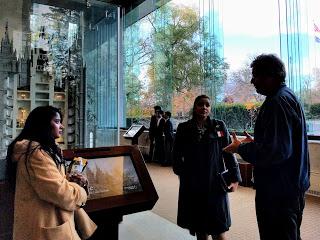 The people we spoke to in Temple Square, an Elder and a couple of Sister Missionaries who gave us a tour, were all very polite. But after a year of visiting bars where people talked about how they want churches to be “accepting,” I couldn’t help wondering what those people would have thought if they were told, “No, you can’t come into that building.”

Also, in conversation with the Elder, I noticed a strange paradox. He talked about how many Christians don’t accept LDS as Christians, and that seemed to bother him. But on the tour, we heard that the LDS church was a restoration of the True Church (not a reformation of it) and Christians post-Apostles and pre-Joseph Smith had things all wrong. Why should it bother the Elder that the people he doesn’t view as “True Christians” don’t consider him a True Christian? 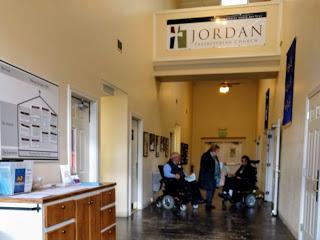 The Elder also asked me how many denominations there are in the United States. I said hundreds, and he pointed out that Wikipedia said there are over two thousand. He viewed this as a bad thing, and I said that our tour of churches in the United States had affirmed my thought that the multiplicity of churches in America is a feature, not a bug. Different churches and denominations can minister to different people with different needs. 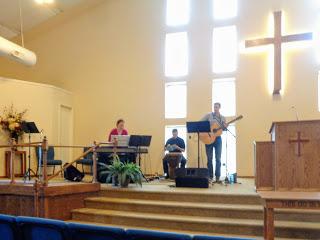 This variety of denominations is quite confusing to people who leave the Mormon Church. Jon told us that many people in their church are former Mormons (“transitioning Mormons” was the phrase Jon used). It can be confusing to learn that, say, most Methodists and Lutherans don’t really think of themselves as being very different from one another. But there are differences. In fact, Jon wrote a book on choosing a church to help Mormons in this process.


Jon and his wife, Lisa, invited Mindy and me to dinner the night before church. We talked about the challenges of ministering in the area. Lisa said she’s always loved being with LDS people and was tagged as most likely to live in Utah in college. Jon said he viewed working in the area as a puzzle (and he loves puzzles). 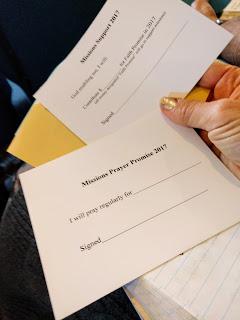 Jon said one thing he loved in Utah was how well Christians (meaning non-Mormons) got along. Recently, he was talking to a young pastor of a different denomination who was looking for a place to meet. Jon surprised the other pastor by offering their building.

But that’s how Christians roll in the area, because there are special challenges for churches in the area. For instance, according to Jon, there aren’t Protestant church buildings in South Jordan (Jordan Presbyterian Church meets in West Jordan). South Jordan has two LDS Temples, but obstacles are put in the way of some non-LDS church planters. For instance, a church found property, but other businesses in the surrounding area opposed the church. Schools are a popular site for church plants in other places, but school systems in the area can rent facilities for only four events per year, no more, eliminating them as an option for churches. 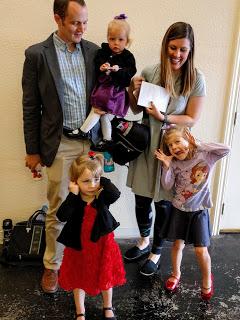 Jordan Presbyterian Church is working to sharpen their vision to minister to the many former Mormons who are trying to figure out how to join a new faith community. One of those ways is a change in the church name. The new name hasn’t been announced, but it wouldn’t be surprising if they drop the “Presbyterian” part of their name, since to most people, it doesn’t carry much meaning.

Jon said they they are looking to be a simple church that focuses on Jesus and His forgiveness. They want to do whatever they can to help people on that journey to know Christ. 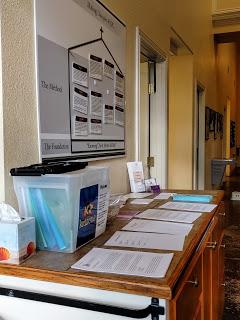 Jordan “whatever it will be called soon” Church seems to be doing a good job of meeting people’s needs. Between services I talked to Dan, who’s legally blind. I asked him if that hampered him during the service. He told me the church office always prints a large print order of service and song lyrics for him and has for the six years he’s attended. He said they never did that for him in the LDS church.
Not everyone in the church is former LDS. Jeremy said that he and his wife came from an Orthodox Presbyterian background, but when they moved to the area there were no Orthodox Presbyterian Churches nearby. This church is a part of the Presbyterian Church of America, and they thought that might be close enough. After their first visit, they knew they didn’t have to look further. They had young daughters and saw there would be support for their kids, too.

We also met Rhonda. She said she decided to join the church because it reminds her of her church back home. She appreciates that she can know everyone in the church, “it’s family.” I asked her if that would change if the new plans implemented by the church led to growth. She said she’d stay, because again, “it’s family.”
There are unique opportunities and challenges to ministering in this area, but it seems that “the Church Whose Name Will Soon Be Revealed” is up to those challenges. 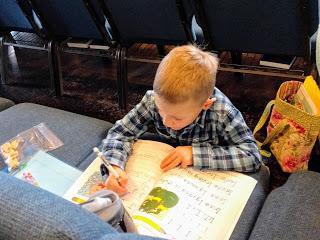 When we contacted Jon about the book, he wrote back to let us know that the church was growing and that a family had recently been baptised. At their baptism, the parents told about their experiences before making the decision to become part of Jordan Valley Church.

They first talked to Jon when they found out they were going to have a baby and needed to change their way of living and wanted help. Jon invited them to read the Bible with him, and after several meetings, Jon explained the idea of God as one Person Who is also three (Father, Son, and Holy Spirit). The parents said they began to see that their own sins caused Jesus' death, and that though He was perfect, He'd sacrificed Himself so they could have a relationship with God.

They said, "We were overwhelmed with how much Jesus loved sinners....For the first time, we understood why Jesus mattered. And for the first time we didn't feel so lost. We finally had a reason to be sober and found more strength to do it. Without Jesus and this church we wouldn't be here with our son. We are so thankful for this church being accepting of us and not treating us differently and for caring for us in so many ways. You treated us like family."

Posted by churchandstates at 7:09 AM
Email ThisBlogThis!Share to TwitterShare to FacebookShare to Pinterest
Labels: 2016, Cheers and Amen, Utah