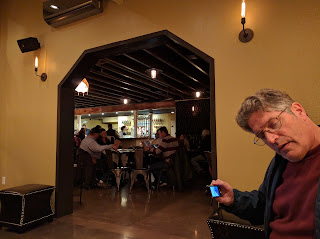 To be honest, most of the bar recommendations we’ve gotten at churches have been lousy. We usually hit a bar in a state before we make it to church, but on occasion, we’ve gone to church first, and people at the church have told us where we should go. Sometimes we get recommendations like, “They make the best burgers!” 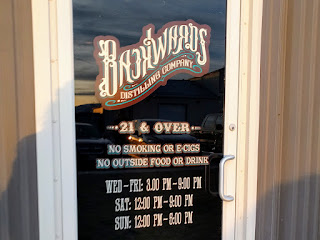 So we went to forward to Backwards.

No one had mentioned clowns. There is a circus theme, and as you enter, there’s a cool ticket booth. There are circus pictures throughout, but the theme carried out in a tasteful way, and none of the pictures of clowns frightened me. Whew. 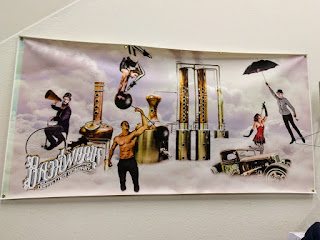 Backwards is a family operation for the Pollack Family. The “Back” in the title uses the family’s first initials (‘B’ for Bill the father, ‘A’ for Amber the daughter, ‘C’ for Chad the son and ‘K’ for Kathy the mother). Though no one in the family had been in the bar or distilling business before, they decided this was a business they could do together. 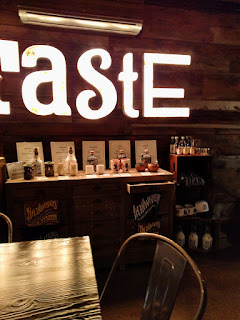 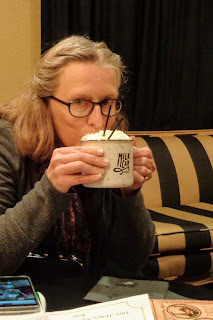 Now that gin, rum, and moonshine have been added to the list, the cocktail options have greatly expanded. We had a wide variety of choices on our visit. Mindy greatly enjoyed her Mr. North, described in the menu as “The best adult hot chocolate you’ve ever had! Cinnamon Moonshine, hot chocolate, homemade whipped cream.” Mindy asked for regular moonshine instead of cinnamon. I chose from the Oddities section of the menu, going with “Zorilda’s First Act: Rich and mysterious with plenty of complexity. Rum, apple cider, molasses, lemon juice, almond orgeat, Angostura bitters.” It was also very good. There were many drinks that looked good on the menu, including several punches for sharing and two non-alcoholic options. 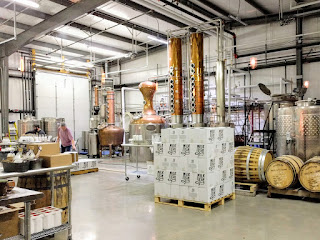 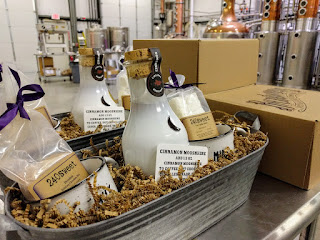 In years to come, they also plan to sell whiskeys, but whiskey needs years to age. (Backwards expects to have whiskey for sale in 2017 or 2018). They hope to focus on American Whiskey and Four Grain Bourbon, but they continue other bourbon experiments. We saw a barrel of Choco Bourbon and “Franken Bourbon”. (Franken Bourbon is the combined leftovers of a variety of batches mixed together. They plan to sell it on Halloween once it’s ready. Each barrel is unique and can’t be reproduced.) 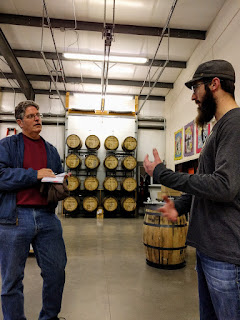 Chad, who has taken on many of the distilling responsibilities, is looking forward to producing absinthe. Chad’s sister Amber bought Chad a bottle of absinthe for his 21st birthday several years ago, and he’s been fascinated with the spirit ever since. Chad said people ask him why the family have a distillery instead of a winery or a brewery. “I’ve made beer and I’ve made wine, and I don’t like it. I love distilling.”  And as he said, they don’t have many grapes in Wyoming, but they have great barley (and beets and wheat). 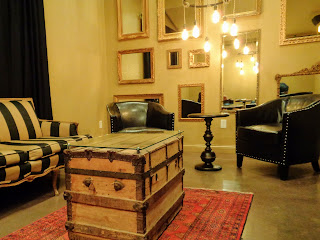 The distillery is, of course, the heart of the business, but the tasting room is a wonderful element of the business. When Mindy and I came in, there wasn’t room at the bar. We went to a very comfortable side room with couches and chairs that tastefully suggested the circus theme.

Micky, one of the servers, allowed us to ask her our two standard questions. It was busy, so at that point she only had time to answer the first, “What makes for a good bar?” 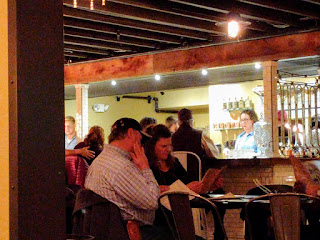 Micky said, “Atmosphere is one thing. It dictates the kind of clientele you bring in and what kind of drinks you serve. Quality is the other thing -- consistency in drinks and service.”

We also asked “What makes for a good church?” But she said she needed more time to think about it. Just about then, two seats at the bar opened up and another server had saved them for us, so we carried our drinks to the bar. 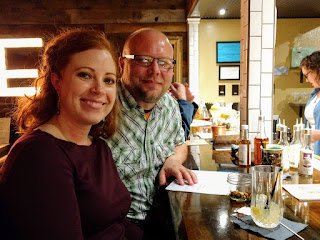 A couple next to us, Mandi and Dave, seemed to be regulars at Backwards. We asked what they liked in a bar, and Mandi expressed her appreciation for this place. “I like the atmosphere and good drinks. They play the music quietly, and it’s not the usual alternative or oldies.” She mentioned Billie Holiday as a typical musician, and said the music was “not too soft, not too loud.” She said the atmosphere at Backwards was “kind of original, with a warm and cozy feeling.” 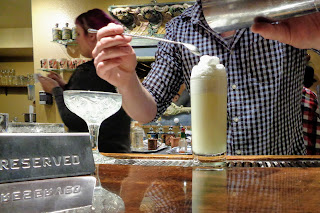 Dave said he appreciates a “knowledgeable staff” (Mandi said, “Can I add that foo?”)

Mandi also said she appreciates attentive but not overbearing staff who can help customers find a drink. She said, “Here, I’ve never had a drink I didn’t want to finish.”

As for what makes for a good church, Mandi said it would be where people “weren’t judgemental, who are open to different ideas” and “didn’t preach down your throat.”
Dave said the church should have “the ability to practice what they preach” and actually do “love others.”  He added that churches should practice the Golden Rule. 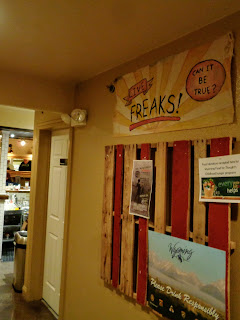 Micky came back to us with her answer to our church question. She said, “It depends on the individual. If they want community, the church should be welcoming. If they’re looking for something spiritual, the church would have altars and a place to be quiet.”

Amber, of the Pollack family, was working behind the bar. I asked whether the family hired bar staff that had experience, and she said no. The family learned about the business through travel, study, and conferences. She said they expected their staff to learn the business as well, and that they had all trained together. Almost  all the staff has been with them for two years. 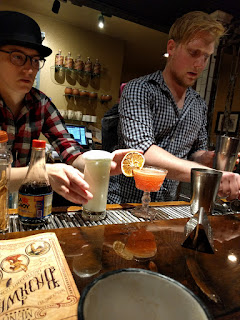 We asked Amber what she thought makes for a good bar. She said, “The warmth of the bar is important. Do people feel welcome? A cocktail menu can be intimidating.” She said the staff should make people feel as comfortable as possible and they need to make people feel safe in trying something new. Again she emphasized “the warmth factor.” She said that a bar should be a social hub. “That’s why we don’t have wifi or loud music. People should meet more people than just the people they came in with.” As for what makes for a good church, she said, “Basically the same thing. Do people feel safe? Do you feel comfortable pondering the big questions?” 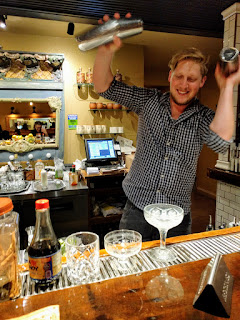 We met Everett, another of the staff who’s been part of Backwards since the place opened. He’d worked in oilfields and been a manager in a grocery store before working at Backwards Distilling Company. He knew the owners, and they hired him. He likes bartending, but he also does marketing and sales. We asked him what makes for a good bar, and he said, “Quiet. I don’t like loud music. And they should have good quality, even if it is just one good signature drink. That’s what I go for.” As for what makes for a good church, he said they should be open minded. He was raised LDS and said, “They aren’t open minded at all. They should be treating everyone with respect.” 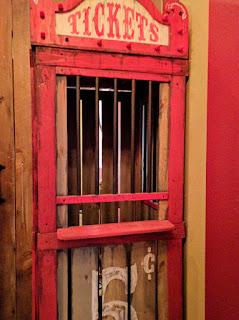 We came out of Backwards with a great deal of respect for the Pollacks who came up with this wonderful place, as Amber said, “directly out of our imagination.”  I’d have a hard time imagining a better place to go for a drink than Backward Distilling Company.
Posted by churchandstates at 4:07 PM
Email ThisBlogThis!Share to TwitterShare to FacebookShare to Pinterest
Labels: 2016, bars, Wyoming