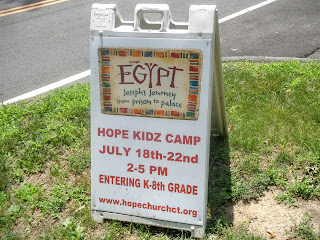 One of the strangest phrases in the English language is "Vacation Bible School." What kid wants to go to school during vacation? When people think of school, they often think of public schools which certainly aren't teaching the Bible. And the acronym VBS sounds a bit like a disease. 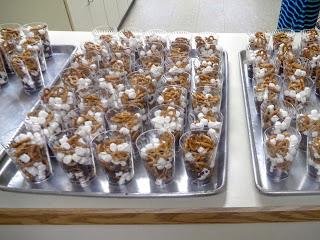 For some parents, VBS is an economical form of day care. For some kids, the snacks and skits and water fights have brought refreshment from summer boredom. And for not an inconsequential number of people, it has introduced them to Jesus, to the Living God. 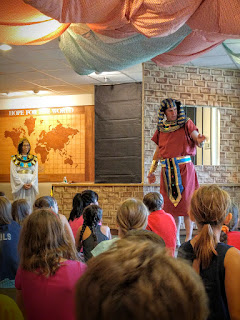 Therefore, we were delighted to have an opportunity to visit a VBS in Connecticut, even if just for opening day. Hope EFC's VBS this year follows Joseph's life, and we were happy to go back to Egypt. 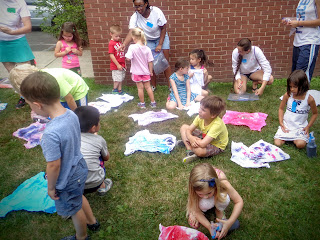 The decorations were simple but fun and creative. The students leading the singing were enthusiastic. The storytelling from "citizens of Egypt" was thought provoking and fun. The snacks (separate snacks for adults and kids) were tasty. And the craft project of spray dyed T-shirts was just the right amount of messy. 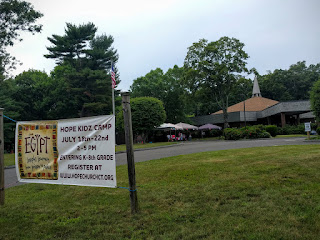 I'm a little jealous of those who could spend a whole week in Egypt. Maybe next year. 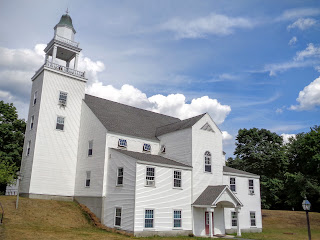 Trinity Church, Congregational, Bolton, Massachusetts
Originally posted 8/2/2016
Sam was quite obviously frustrated. Wires were hanging from the ceiling of her kitchen where she had been trying to repair a light fixture that just wouldn’t work. Mindy remarked that electrical work made her brain glaze over, and Sam said she felt exactly the same. She’s a widow with six kids, and it takes work and some special  skills to keep up the house. A small group Bible study meets every Friday night at the house. We were there with group members Alex and Joanna Langberg (Mindy went to college with Joanna). 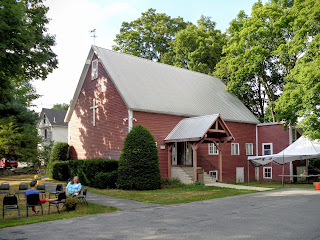 Alex and Joanna’s church, Trinity, began with a Bible study in the 1960’s. A group of women, some who went to church and some who didn’t, met regularly. The women didn’t feel any of the churches in the area had enough depth in their study of Scripture, and they urged their husbands to join their Bible study. Some did; these folks started the church in 1963. 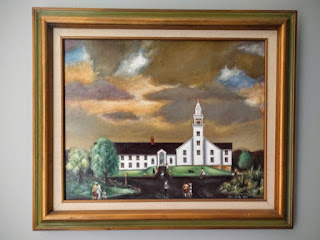 They were able to buy farm property, and their first meetings were held in the barn. They were able to get a bank loan to renovate the barn’s interior, turning the barn into a sanctuary.  In the 1970s, they began building a new structure, and ten years later,  they added to that building and built the current sanctuary. They continue to plan and build.

I talked to a variety of people about how they came to the church and what they appreciate about Trinity. 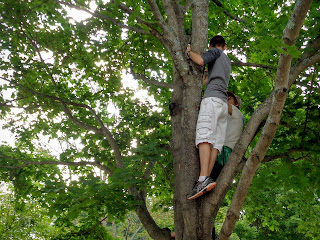 Greg is a sophomore in high school. When he was in elementary school, he asked his family if they could visit Trinity because he had friends who went to the church. His family did, and everyone in the family liked the church. Greg likes the youth group, appreciating his friendships there. He also likes the summer youth group trips. There is a rotation of three different trips: backpacking, Creation (a Christian music festival), and a missions trip to Jackson, Mississippi, where the team works with Voice of Calvary, founded by John Perkins. Students work on the houses of the poor and learn about the causes of poverty. 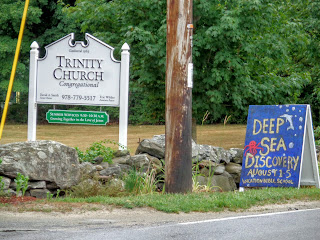 Greg is looking forward to helping with Vacation Bible School the next week. He expects to lead a group of 3rd graders as well as helping with skits (playing an “underwater robot” and belaying on a rope from the rafters, which he thought the kids would enjoy). 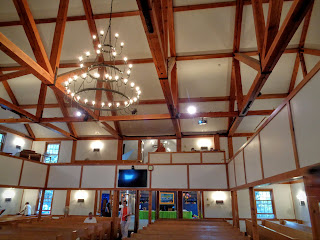 John is the sexton (basically a kind of property manager) of the church. He’s had the job six years, but he’s attended the church for twenty. When they were searching for a church to attend , they were discouraged by many churches in the area. John’s wife would refer to churches as “cold” or “dark,” but when she came to Trinity, she called it “warm” and “light.” John was impressed when a woman he talked to on this first visit treated him like she’d known him for years. 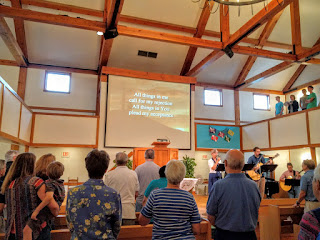 Another man I talked to, Steve, said many Congregational churches in the area are like social clubs, “which is fine,” but he was impressed by Trinity because they taught “the actual Gospel of Jesus Christ and believed it.” 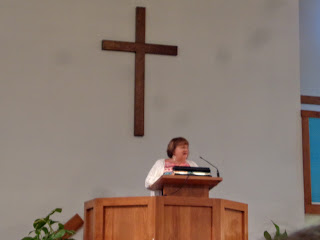 Before the service I met Deb, a missionary with CRU (formerly Campus Crusade for Christ). She’ll do the missions talks for VBS, and she was talking about her work during the worship service that morning as well. She came to Trinity when she was a little girl. She came to trust in Christ through the children’s ministries of the church, including VBS and Pioneer Girls. She was given her first Bible by a woman in the church, and the church supported her when she went with CRU to serve overseas and when she returned to serve CRU in Orlando, Florida. 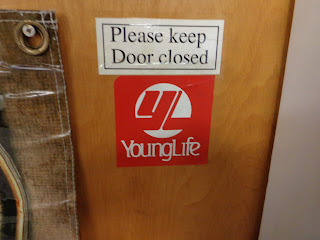 I was happy to hear that the church supports the local ministry Young Life, an outreach to High School students. (I worked as a Young Life volunteer in college and seminary.) The church was instrumental in bringing the organization to the area. They provide office space for the local Young Life area director. (Our friends Joanna and Alex serve on the local Young Life committee. Their grown kids attended YL Club when they were in high school.) The church also supports a local crisis pregnancy center among other local ministries and missions organizations. 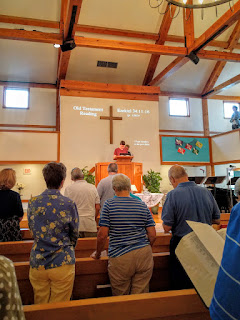 We attended the 9:30 am Sunday worship service (during the summer there’s just one service, but during the rest of the year there are two services.) Eric Wilder, the Associate Pastor for Youth and Young Adults, made the announcements. Apparently the new church pictorial directory has been a long time coming, and he announced that they’d finally arrived. He said he believed their arrival may have been foretold in the Book of Revelation as a sign of Christ’s Second Coming. He also announced that ice cream scoopers were still needed for Thursday night’s VBS community night. He also encouraged non-scoopers to come in order to get to know the parents of the children who came to VBS. 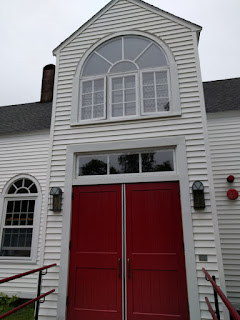 The church apparently has a choir, but they weren’t singing the morning we were there. (They might not meet in the summer -- we forgot to ask.) The worship band led the congregation in choruses and hymns (we could follow along and sing via words in the bulletin, in the hymnal, and on the screen). 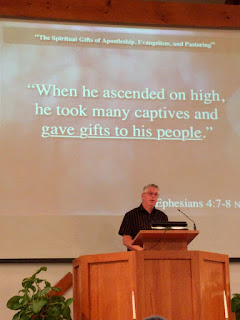 Pastor David Smith was in the midst of a series on spiritual gifts, speaking on some of the “Office” gifts of apostle, pastor, and evangelist. He added that even though we may not have a certain spiritual gift doesn’t mean we are exempt from practicing. For instance, just because we don’t have the gift of mercy doesn’t mean we should not show mercy -- so this sermon wasn’t just for people with those office gifts.

Speaking of evangelism, he told a story he had heard from a man in the church. Gene was on a plane flight, and felt he should share the Gospel with the man seated next to him. After his presentation, Gene’s seatmate introduced himself as Bill Hybels, the pastor of Willow Creek Community Church, one of the largest churches in the country. Bill told Gene he had done a good job. 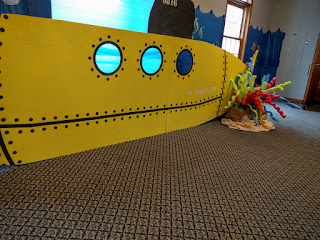 Pastor Smith said the reason he sometimes gives a gospel presentation in church services is because he believes “a healthy church will always have some people who aren’t Christians.” 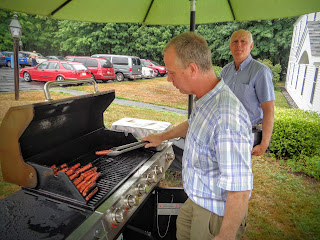 Pastor Smith didn’t give the benediction that morning. He called Gary, the pastor of another local congregation, Clinton Congregational Church, to come forward. The men meet regularly in a local ministerial group, and Smith had Gary “work on his vacation.” 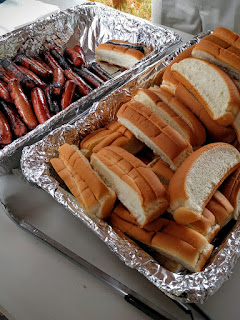 After church, our friend Alex and another gentleman, Tom, cooked and served hot dogs. (They do this every Sunday in July. By the way, these MA hot dog buns are different from West Coast hot dog buns. Someone suggested that they’re more lobster roll style buns.)

Oh, and about the light fixture in Sam’s kitchen: Alex climbed up on the counter and fixed it after Bible study. Because that’s what people at Trinity do -- help bring God’s light to each other. 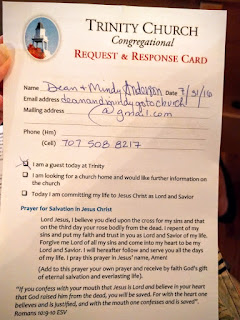 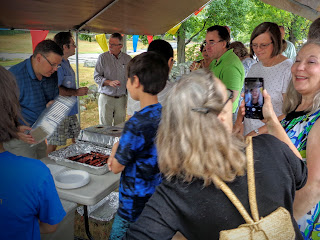