We want to recognize some of the wonderful people we met during 2016 whose stories didn't fit into Cheers and Amen, the book about our adventure of visiting a bar and a church in every state. To do that, we'll be sharing some of our favorite posts here. Check the end of the post for a recent update from former strangers who allowed us to become their friends. 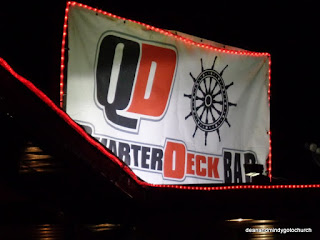 People sometimes ask us how we decide we decide which bar in a state to write about. Needless to say, it is a complex and studious process designed with scientific precision. For instance, this week the deciding factor was that we found ourselves in Long Beach, Mississippi, and we wanted to watch the Golden State Warriors play. (The Warriors were attempting to tie the Chicago Bulls' record for consecutive home wins.) We noticed there was a sports bar in town, so that's where we went. 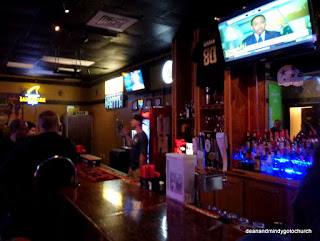 They have eight TVs at the QuarterDeck; the largest, center screen was playing the Republican debate. (We enjoyed the bar's peanut gallery commentary: "They're arguing like two year olds -- it's great." "Don't change the channel, they might break out in a fist fight.")  I asked the bartender if he would change the channel on another TV from a college hoops game to the Warriors. John Paul the bartender happily made the change and launched into laudatory praise of the wonders of Stephen Curry's shooting skills.

After we ordered, we asked John Paul (J.P.) to tell us about himself. He said he'd been in the bar industry for seventeen years. He seemed young for that, but he explained he started working in restaurants when he was sixteen. He's worked most of those years in the Gulf Coast area, but he's been at the QuarterDeck eight months. He's also working on his Master's in Business Administration. 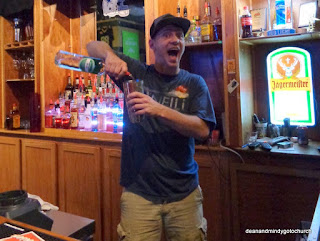 J.P. seemed a bit apologetic about the small crowd at the bar that night, explaining that when Thursday night football was going they always had a good group, and that on Friday and Saturday nights they usually have one to two hundred people. Since he wasn't too busy, though, we asked him our two questions, "What makes for a good bar?" and "What makes for a good church?" 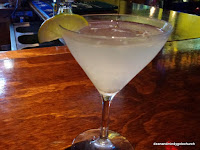 For a good bar, J.P. argued for the importance of the staff knowing their customers. He finds it important to not only know the faces and names of his guests, but also their drinks. He takes pride in anticipating what his customers will order before they order it. (A number of other guests assured us that J.P. and the rest of the bartender staff of QuarterDeck do remember their customers.) "My 200 people are my 200 people. No one could buy them," J.P. said. 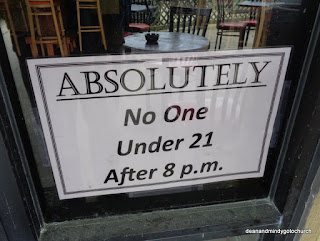 He also argued for the importance of quality and consistency in service. J.P. said he could be a "bonehead" outside of work but when he was at work, he takes his work seriously. Bartenders are often offered to be treated to a drink by a customer, but J.P. always refuses because he wants to be able to give 100 %. The bar is also consistent in its hours. The sign says they close at 2:00 am, and they stay open until 2:00 am, even if the people are sparse and the weather is harsh. Often, J.P. said, bartenders from other places will come to QD after their bars close.

When we asked J.P. what made for a good church, he first said what he didn't like in a church: hypocrites. "I went to a youth group, and kids would make pledges to remain a virgin and say they wouldn't drink, and during the week I'd see and hear about them breaking their word." But he had nothing but kind words for the Baptist Church in Mississippi. Beginning at the age of five, J.P. lived in an orphanage, the Baptist Children's Village, where he remained until he was on his own. His parents were abusive, and he appreciated the safety he found at the Children's Village. "I'm the product of donations. Where I am today is because of the generosity of random people who made donations; of time and money and goods." 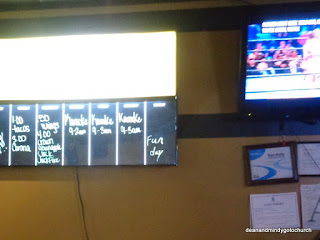 The customers we talked to were all enthusiastic about the bar and especially the staff at Quarter Deck.

Retired Petty Officer First Class Gibson appreciates the many special nights: Taco Tuesdays, W whiskey and wings on Wednesdays, free pool on Thursdays and karaoke on various nights. There's always stuff to attract people. He said, "When I walk in here, I don't have to request a drink -- everyone knows I'm having a Bud Light."

As for a good church, Gibson said he thinks the church should be "open to everybody whether Baptist, gay, lesbian, I don't care. God accepts all of us. I'm sure when we get to St. Peter's gate and ask forgiveness if we do what we think was right, he'll let us in." 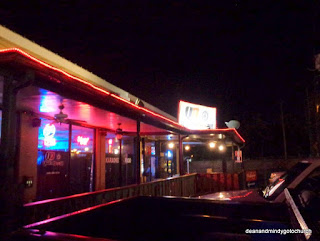 Aaron of the Air Force likes a bar where he can hear himself think. And meet women. He calls himself a "checkbook Catholic," attending four times a year. He appreciates it when the church speaks English, having once or twice found himself in Mass where only Spanish -- or Latin -- was used. When he was in Basic he appreciated the Catholic Church having alcohol.

We met Julie and Paul, a married couple who look forward to embarking on an adventure. They plan to fix up their sailboat to explore the world. Paul is a writer, and Julie is a photographer, so they anticipate recording their adventures. For some reason, Mindy and I really liked Julie and Paul. 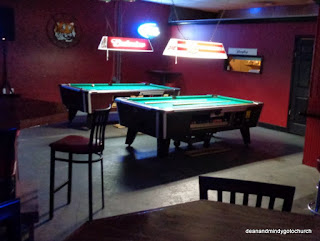 In the bar, Julie appreciates when the staff seems happy to have you there. In the church, she appreciates when people help each other. She said that in this area, people will pitch in to babysit or help someone move when needed.

I didn't ask Paul and Julie what they'd do out on the ocean without any bars or churches. I guess I'll have to find out how they manage when they start writing about it.

Last week, we contacted QuarterDeck to let them know about the book (and to thank JP once again for how he'd made us feel welcome). We were sad to learn that JP passed away last September. We'll never forget him.
Posted by churchandstates at 2:47 PM
Email ThisBlogThis!Share to TwitterShare to FacebookShare to Pinterest
Labels: 2016, Cheers and Amen, Mississippi