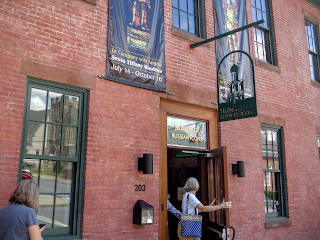 To be honest, I wasn't all that excited when our friends suggested we visit the Museum of Russian Icons in Clinton, Massachusetts. But going to church -- and seeing church related sights -- is what this blog is all about, so we went. 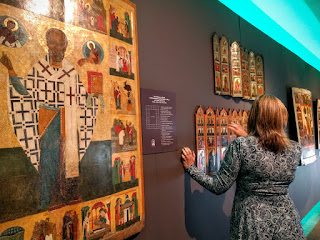 The website was intriguing, particularly in this instruction to visitors: "you may be tempted to touch the icons and artifacts on display. Though your touch would be meant to explore and learn, it can be damaging to the art."  The museum isn't large, and docent-led tours start throughout the day. The icons aren't behind ropes or glass, so the "don't touch" warning is helpful. 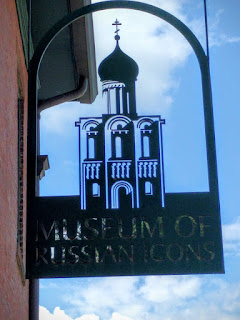 When we arrived, we were struck by the style of the building, especially inside. The museum is on three floors, with a self-serve Russian Tea Room on the bottom floor (along with touchable items including matryoshka dolls for younger visitors to explore), a light-filled central stairway, open rooms with art on all the walls as well as in display cases in the gallery on the top floor. Visitors could start anywhere; each display had helpful informational labels (visitors could also use their phones for an audio tour) and, often, magnifying glasses for closer inspection. 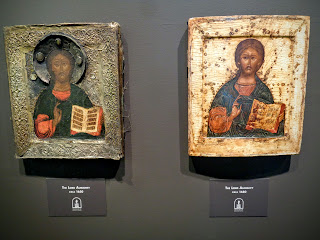 Now that we've visited, I know that (for example) icons aren't an artist's personalized portrayal of saints or occurances in the life of Christ. Icon "writers" replicated images as faithfully as possible, following their own local, current styles. Icons were, in some cases, considered the definitive history of a saint's life; often, it was the only permanent record of the story. 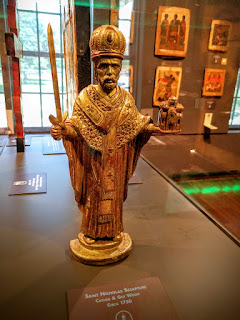 We wandered through the displays, picking up information as we went (St. Nicholas is portrayed with a sword in his role as patron saint and protector of Russia; the lacquer used to protect icons tends to darken over the centuries, eventually obscuring the artwork; icons typically warp, creating a bowed surface which is considered a mark of authenticity, age, and beauty) By the time we left, I'd begun to appreciate the painters and the preservers of these artworks, and though we won't be around for it, I almost feel like I understand the topic of the next special exhibit: Holy Fools and Wonder Workers
Posted by churchandstates at 8:12 AM
Email ThisBlogThis!Share to TwitterShare to FacebookShare to Pinterest
Labels: 2016, Massachusetts, museums